Either that or they’re completely oblivious to fans’ disdain

GameStop are running an animated advert for Ubisoft’s upcoming title Assassin’s Creed Origins that’s either completely hypocritical to its own practices, or blatantly tone-deaf to its consumers.

In the ad, we get a shot of protagonist Beyak in action, suddenly followed by a gurning camel face and then the following image: 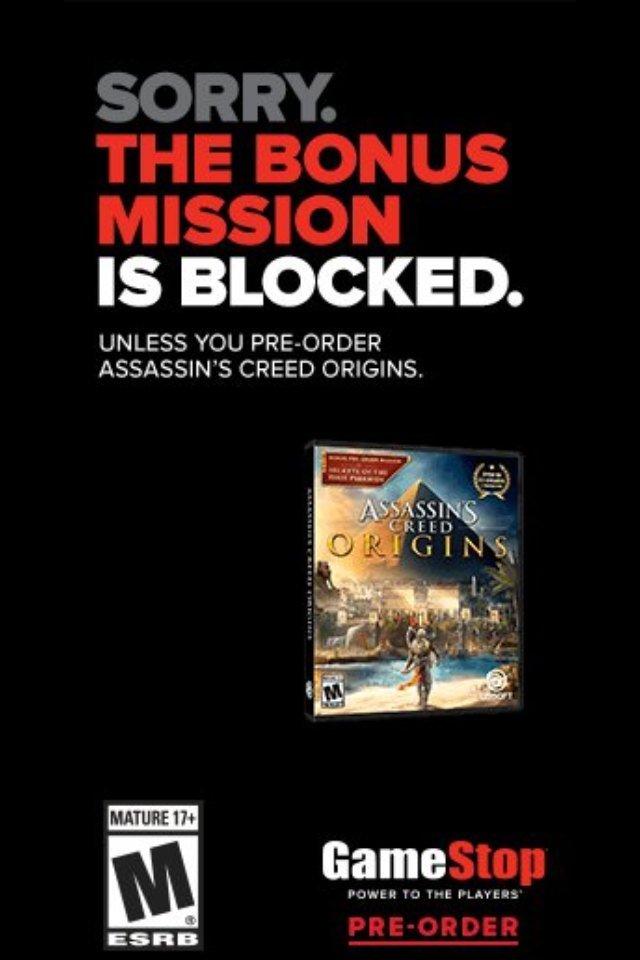 I’m not one for OUTRAGE, nor am I outraged here. I’m more just baffled by the advert’s intent.

The issue with this “joke” is that it’s an open admittance of consumer frustrations, satirised, then perpetrated by a company that gladly falls in line with pre-order culture’s annoying tactics, heavily pushing them on gamers with zero hesitation. As if GameStop is saying “Man, isn’t it bullshit that publishers do pre-order stuff like this?” before immediately following it up with “Please pre-order Assassin’s Creed Origins“.

However, the alternate scenario here, is that I may actually be giving too much credit to the advert by suggesting that it is, in fact, satire.

On further investigation, the corresponding TV commercial to this campaign unashamedly presents those who do not pre-order the game as people who will be genuinely left out of all the fun, and isolated from the supposed great times that everyone else is having.

In my opinion, this whole campaign is either mocking GameStop’s own practices, or is just completely ignorant to its consumer’s unhappiness. In either case, that’s a terrible campaign. Satire is only satire when it’s an outsider making the joke. You don’t get to be part of the culture that encourages and enforces the problem and also be the hip cool-kid that pokes fun at it.

“Power to the Players”. Indeed.