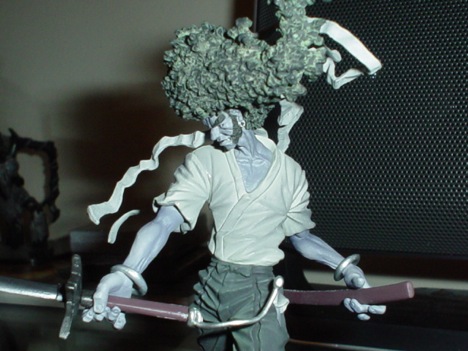 If you didn’t know, Afro Samurai is hitting the Xbox 360 and PlayStation 3 tomorrow. GameStop has a little pre-order offer — I know, it’s kind of late — for those willing to fork over the cash. It’s a figurine of Afro, complete with a Number 2 headband, samurai sword, and sheath.

I got mine a bit early and I thought I would share it with you. The figure is small and the plastic is quite flimsy. However, I appreciate the detail work: I love the furrowed brow, grimace and ruffled hair. The headband (another excellent detail) comes in two different pieces that you have to plug into the back of Afro’s head.

I felt bad that my Afro didn’t have anything to hit, so I put him in front of a Dungeons and Dragons monster-thing that I got at Gen Con last summer. Sadly, Afro didn’t kill the monster. The fact that he didn’t animate is totally ridiculous. I paid 40 dollars for that goddamn cupboard I put him in after assembly. If that gypsy who sold me that box of woe ever comes back to town, I’m cursing her.