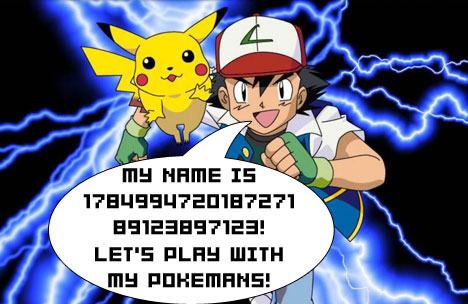 This seals the deal — I’m not going to play Pokemon Battle Revolution online. Well, this and the fact that I’m not 9-years-old, of course.

Hot on the heels of the recent GameSpy/Nintendo love-in comes some not-so-shocking, yet depressing news. In a recent interview with Wii: Definitive Speculation, GameSpy (who will providing the tools for Nintendo and third-parties to take their games online) dropped the bomb:

Falafelkid: Just one last question to make absolutely sure I have got this right, please. If I have a friend roster in one game, that roster will not be available to me in any other game. I have to build up an entirely new list for each title, right?

GameSpy: The answer to your question is yes, for the Wii friend lists are game specific.

Forget for a second that the person doing the interview is named “Falafelkid” (I tried to convince you guys my last name was actually “Brutal” for awhile) and let the answer sink in. That’s right — friend codes for every single online multi-player game on the Wii! Oh joy!

Well damn it, Nintendo. If this is actually the case, my aspirations of playing any Wii games online are dead to me. Nintendo won’t even let their own forum users share friend codes via private messages, for God’s sake.

You know, I’m really glad that I was able to use my system code to share my Chuck Norris Mii with my buddies; but I guess it would have been too much to ask to make the system specific code useful for something that pertains to actual gaming.