Barbara the Barbarian is the newest playable character in Rayman Legends who wields a giant battle axe helping Rayman and the crew save the day. There’s no difference between the characters as far as the attacks go, but I know for a fact that she’s going to be my main from now on. She has some hilarious animations going on, and it’s just pretty cool seeing her swing the battle axe around.

She, and really everything about Rayman Legends looks just gorgeous. I was originally sad that Ubisoft switched from the 2D HD art, but now I’m all about the new visual style. 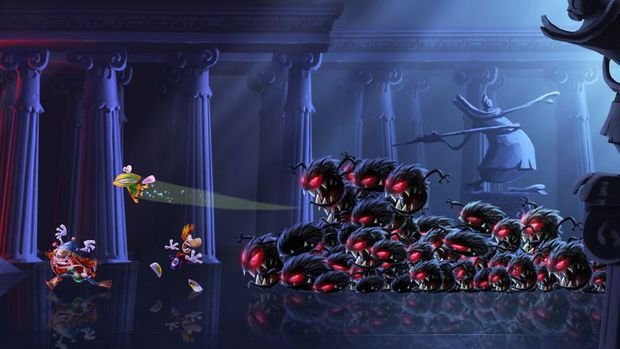 On top of playing as Barbara, I got to play on two brand new levels, the first being Swarmed and Dangerous. This level sees players having to rush through the stage while avoiding hundreds of dark little creatures laid out all across the level. They can easily overwhelm the heroes, so it’s important to communicate with the player using the Wii U pad in this level. The Wii U player is able to hold back enemies, toss them around, pop a player’s bubble after getting hurt, and find extra items by pressing on the Wii U’s screen.

Next I played on Orchestral Chaos, a auto sidescrolling level where stopping for more than a few seconds usually means death. You have to always be on the move, avoiding dangers and enemies until you reach the end goal. This is a musical themed level as well, with prompts along the environment for the Wii U pad player to press in time with the music. Pressing these prompts in sync with the music results in some rewards, and there’s no negative consequence for missing a note.

There are a few levels like this where you have to be survive against the level. The one Chad played at E3 had a heavy metal style of music going, whereas the one I saw gave off more of a Looney Tunes musical style.

There’s really no doubt in my mind that Rayman Legends will be one of the best Wii U games. The visuals are wonderful, the gameplay is fantastic, and you’re a crazy person if you miss out on this one.