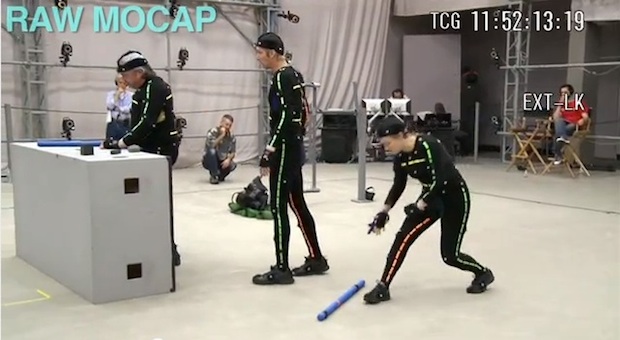 This afternoon at gamescom, Sony hosted a session where actor Troy Baker (Snow from Final Fantasy XIII, Vincent from Catherine) and TV and film actress Ashley Johnson (The Avengers) revealed some behind-the-scenes stories from their work on upcoming Naughty Dog game The Last of Us. The entire presentation was enjoyable as they covered everything from how they approach their scripts to their daily process on the set. But what really stuck with me was seeing these actors at work on the motion capture set. Fascinating stuff.

Baker (main character Joel) and Johnson (Ellie) set up how their motion capture sessions would typically play out after showing us finished game footage of a scene where they’re introduced to a character named Bill (played by actor W. Earl Brown). The finished game footage was impressive on its own, but seeing the raw motion capture really showed the range of these actors. The following video shows that every movement is captured by Naughty Dog’s process, and comparing this to the final work shows that the actors really have to be on top of their game.

Even with the silly suits and foam props, this is great stuff.

Baker explained that about 90 percent of the in-game audio is recorded during these motion capture sessions, with the forehead-mounted microphones you saw in the above video. This makes for a very true representation of the original performance, giving them that much more power to move the player.

Speaking on how they get into character, Johnson explained that she thinks about Ellie and how she has only lived in a quarantined zone for her 14 years, and how she has yet to see a world any different than the rough and dangerous one she knows. Johnson approaches Ellie as an adult, despite Ellie’s young age.

Baker says that he latched onto one line from the script early on in the process: “…there’s few moral lines left to cross…”

Baker called this a profound statement for anyone to make, and said that this line has served as an anchor to develop Joel’s character.

When finally working together on the motion capture stage, the two agreed that they don’t usually do much to prepare how lines will be delivered. Instead, they wait to see how each other will react. Baker says that they end up listening to each other to have a conversation instead of reciting their lines. He said that they’re best prepared when they think to prepare for anything.

If these videos of their performances are any indication, they have it figured out. Naughty Dog is definitely not new to characters with depth, but this presentation made it clear that good actors are just as important to the process as good writing and design are.