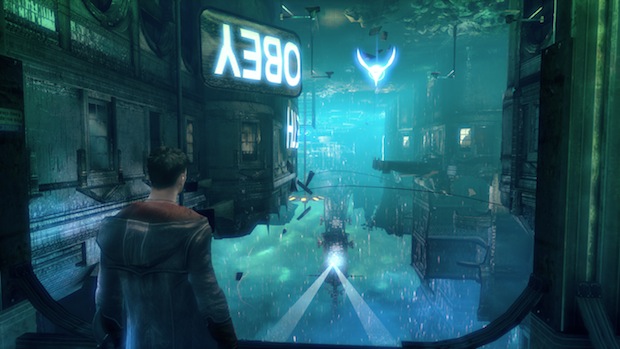 Being one that writes about games for a living, I’m in a rare position that has me playing some games as they’re being made, letting me sort of follow its development along the way. Ninja Theory’s upcoming DmC: Devil May Cry is one of those games for me.

Since it was announced at Tokyo Game Show a few years ago I’ve had my hands on every build they’ve shown to the gaming press, talked to the developers a few times, and have written a fair bit about it. I’ve previewed the game more than once, and Jim did the same for you again at E3 this summer. We’ve said a lot about DmC here at Destructoid, and I would hope by now that you would have at least gathered that we dig it.

And now that a new build and stage of DmC has been made available for press members attending gamescom this week, I’ve played it again. I mean, why not? Who wouldn’t want to see more of a game that they’re into?

I’m not here to preview DmC again for you, but I am here to tell you that it’s even better than the last time I played it. I immediately noticed that they’ve tuned the timing for the combat. Attacks rolled off the fingers much faster than ever before; it’s much faster now. Of course, this being the beginning of the demo stage, I was just swinging and shooting into nothingness, but when I was finally able to connect with enemies, combat felt really nice. Again, it’s super fast, and impressively tight. Mind you, I had no beef before. It’s just way better now.

This demo build let me play with Dante’s demonic gauntlets, called Eryx. They were armed opposite the super-juggle-y angelic scythe, Osiris. Together they made quite a pair in normal combat, though later in the stage some larger enemies would only take damage from one or the other (demonic or angelic), which forced me to break them up.

Even alone, Eryx is a lot of fun. The gauntlets mix up the combat flow a bit as they hit a bit slower, though also a bit harder. What’s great is that the attack buttons can be held down to charge, and then released to send a punch or uppercut. Charging an uppercut to a fiery maximum and having it land takes a long time, but it was always a thrill. To jump overhead, charge, and land with a downward punch feels incredibly powerful. You can almost feel enemies’ innards shatter when you connect. 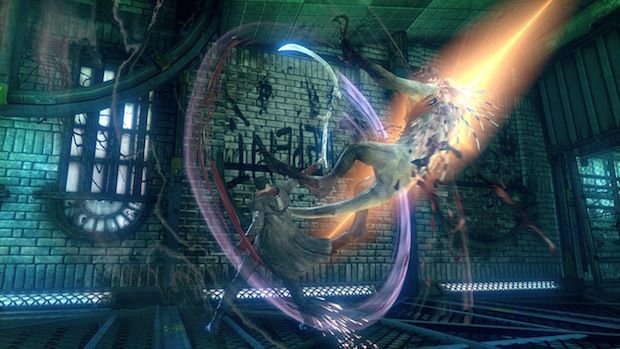 The platforming elements of DmC have also improved. One of my only real concerns was how unforgiving past builds were in trying to get around in some of the more demanding platforming segments. Of course, some of this was user error, as DmC has you using grappling hooks, moving platforms and mid-air dashes alongside standard running and jumping to get around. They’re not making it easy on you, and that’s fine, but I did question some of the timing and feel in the controls.

It seems better now. A new stage I played in this build was set in an area made of broken, upside down bridges that Dante had to work his way through. Jumps and double jumps were sufficient only for the first few platforms. After this, his grappling hook was required. Platforms farther out require all that Dante can give, which means that he’ll have to run to the end of a platform, double jump for as much distance as possible, and then use a mid-air dash called an Angel Boost to close the gap. The feel of coming off from a double jump into a boost feels more reliable now. I still fell to my death a few times, but I’m not blaming the game in these cases.

I really dig some of the platform play I saw in this stage that has you using the grappling hook to pull yourself toward an object and then Angel Boosting through a portal to get across longer distances. Again, this just feels good. It looks really cool, too. 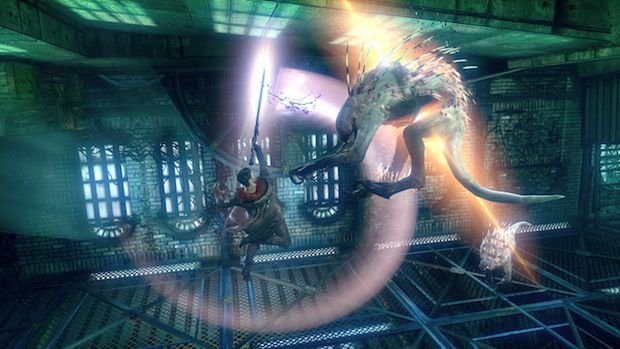 With all the jumping, boosting, flying, falling and other types of platforming, this stage really had me in a place where I was physically leaning back and forth, as if my shifting would have me just making the next jump. When you have the physical feeling of catching yourself from just barely making it across a gap in a game, you know you’re really into it.

One last note. This demo gave the first hint of this new Dante showing compassion. I won’t ruin the story for you (mostly because I don’t have the full scope of it), but in everything I’ve seen up until now has shown him being an asshole. For the first time, in this demo, he shows some caring towards suffering people. Interesting stuff for sure.

I’ll echo what both Jim and I have said earlier once more. If you’ve somehow decided that you don’t like this reboot, or that you cannot stand this new Dante, still, you’re missing out if you don’t at least try it. It may not be what you’re used to, but you shouldn’t write it off just for that. I think Ninja Theory has something special here, and I can’t wait to play more.