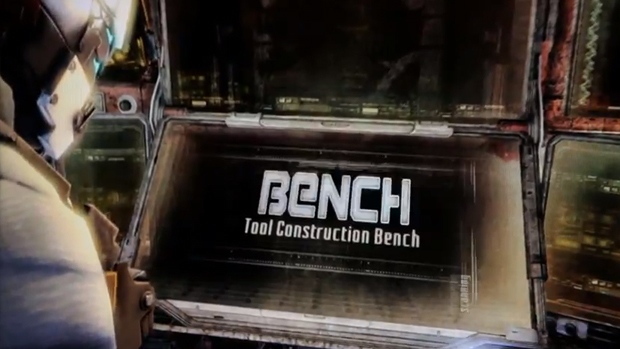 Originally I thought that the weapon crafting system in Dead Space 3 was going to just be a case of slapping two guns together to make a new weapon. It’s actually far more advanced than that, as there’s a deep level of customizing going on here.

You can upgrade standard weapons with different features, but you can also build guns from the ground up too. A simple example I got to see was the iconic Plasma Cutter with a stasis coating on its ammunition, which will occasionally inflict a slow-motion effect on enemies. There are a variety of secondary ammo effects available for all guns.

Then I got to see a gun built from the ground up. The “Heavy Barrel,” as it was called, was made up of about eight parts. A rocket launcher was its primary attack, and it featured a pulse wave blast as its secondary. The rockets were also equipped with stasis coating, and it was neat seeing bodies get blown up in slow motion. At one point Isaac got hit with the stasis blast on accident as the gun didn’t have a safety guard equipped to prevent blow back fire.

You can also upgrade your weapons as in the past game. In the case of the Heavy Barrel, we increased the reload and rate of fire speeds. All the upgrading and building you do will require parts that you scavenge along your journey. You won’t be building anything crazy in the beginning, but there should be some cool designs that can be constructed nearer to the end of your journey.

Visceral is giving players a variety of tools to create badass weapons here. I only got a quick peek at the crafting, but it looked like there will be a lot for players to mess with. A blueprint of your custom gun can also be shared with co-op buddies so they can easily see how the gun was made.

I know the first thing I’m going to make is a Ripper gun attached to the flamethrower. The ripper blades will actually be on fire!