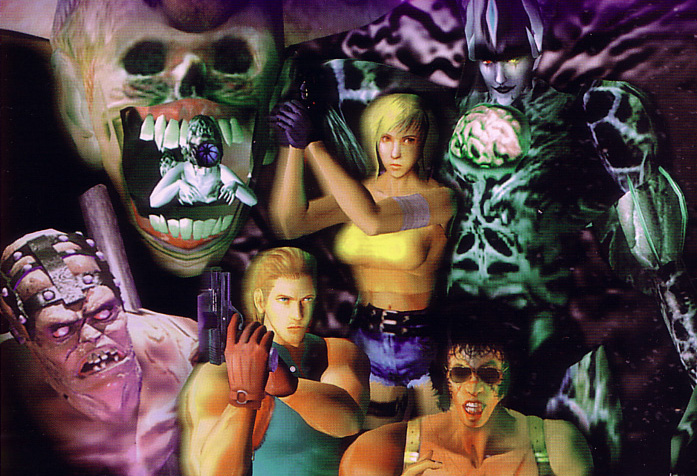 As you well ought to know, this week marks the ten year anniversary of the Dreamcast, Sega’s last (and some say best) videogame console. We’ll be celebrating the little underdog’s birthday all week, starting with this special Dreamcast-flavored edition of Games Time Forgot.

Zombie Revenge was one of the first Dreamcast games I ever loved. Blue Stinger was little too awful to truly get behind, and Chu Chu Rocket had a great commercial, but wasn’t quite “next gen” enough for me to totally freak out over. Zombie Revenge was different. At the time, it was truly special. Back when it first came out, there were only a couple of “zombies games” on the market, and none of them allowed you to wander through a city with a friend and beat the crap out of zombies with your bare hands. Though the game didn’t receive the best critical or public reception, many of its finer points have gone on to be used in multiple other games, like Dead Rising and Left 4 Dead.

Despite all of its trend setting traits, people really have forgotten Zombie Revenge (as the lack of Zombie Revenge sequels and remakes have proven). Hit the jump for my attempt at sharing my love for this maligned cult classic.

Sneak peak- its got zombie monkeys.

At its point of initial release, Zombie Revenge was just in the wrong place at the wrong time. Arcade-style gameplay was on the way out and long-play adventure games were on the way in. Two player co-op beat ’em ups had been replaced by two player competitive fighters. Worst of all, appreciation for Engrish was on the sad decline. Tough times indeed.

It’s such a shame, because Zombie Revenge had so much going for it. All aesthetics aside, it’s an interesting beat ’em up with good combo system, varied offensive and defensive play strategies, interesting bosses, and tons of different weapons to pick up along the way. Combine that stuff with a scenario that allows you to play as a muscular Japanese man with an afro who has the ability to break zombies into multiple pieces via flaming backhands, and you have yourself a classic.

Zombie Revenge tells the gripping story of three AMS agents (the same government agency from the House of the Dead games) trapped in a city during a zombie outbreak. From their humble start in a tiny storage cubicle, they travel through the city streets, down sewers, on top of trains, in helicopters, and into the “House of the Dead” itself en-route to taking down Zed, a silver eyed weirdo with the most bad-ass talking internet avatar on the planet. Why would they travel all that way to kill a guy who is renowned for his “love for all human beings”? Well, “he’s the one making the zombies” I guess. At least, that’s what attractive leading man Stick Breitling tells me.

I know that in this post-“all-your-base” internet society, it’s a bit played out to proclaim your love for awkward, borderline nonsensical Engrish, but I just can’t help myself. There is something so genuinely lovable about the way the characters communicate in Zombies Revenge. It’s funny, creepy, and otherworldly all at the same time. The only thing the game is missing in terms of Engrish is the classic “Don’t come!” line from House of the Dead 2. Ah well, I guess you can’t have everything.

When it comes to combat though, Zombie Revenge pretty much does have everything. The game allows you to block, dodge, dash, combo, “extra joy”, choke, and shotgun decap zombies in unprecedented glory. There is also a huge variety of melee weapons and firearms in the game. Lasers, flamethrowers, giant drills, land mines, and various other heavy weapons all made the cut. There’s even an El Mariachi style guitar-gun in the game. Very nice.

The zombies know how to mix it up as well. Over the course of the game, the undead will go for the bite, beat you with their bare hands, take aim at you with multiple hand guns, and do the old “projectile vomit from ten feet away” trick as well. Hey, how is it that so many videogame zombies have such strong diaphragms? How do the vomit with such Olympic force? Shouldn’t they be weak from containing all that undigested human meat? But I digress.

Human-zombie variety is just the start of it. There are also baseball-loving dance-freak zombies, monkey zombies, plant zombies, big-head mutant zombies, electric zombies, and so forth. Perhaps the best zombie of all is the zombie your character turns into when they die. When you bite it in a co-op game, your character’s corpse will rise from the dirt and try to eat your former friend. It’s just another sweet little detail that show that Zombie Revenge is a real classic Sega-style labor of love.

Sega also went the extra mile with the game’s Dreamcast exclusive features. The game comes loaded with the prerequisite Vs mode, survival mode, and unlockable outfits. As nice as they all are, the features that really stand out in my mind are the special VMU mini-games that you can take with you on the go.

Do you remember the VMU? It was Sega’s answer to the PS1’s memory card, and perhaps the most risky, interesting piece of Sega hardware ever made. Not only is it a storage device, but it’s also a little portable game console in its own right. Participating games allowed you to save your progress on the VMU, and little videogames too.

The Zombie Revenge VMU games are my favorite in VMU history. In the annals of zombie-comedy, they remain near the top of the ridiculousness tier (along with the full-fledged console titles The Typing of the Dead and The Pinball of the Dead). There are three VMU games in all; Zombie Doubt, a memory testing game, Zombie Fishing, a fish-for-zombies game, and Zombie Raising, a Tamagotchi-style pet sim where you feed your Zombie Revenge character to help him/her become a better person. If the sound of there three VMU exclusives haven’t sold you on Zombie Revenge, I don’t know what will.

I could keep going about the many other things I love about this game, but I think you should probably play it for yourself. Suffice to say, there are a lot of things about Zombie Revenge that make it special. If they were to make a sequel to the game now, I don’t think it would be possible for Sega to pack the same level of Dreamcast-ness into the follow up. Well, I guess if they actually made the game for the Dreamcast, (complete with new VMU games like Zombie Popcorn and Zombie Shoeshine) then maybe they could pull it off, but even then it’s hard to imagine that same yucky magic. Either way, I’d love to see them try. Even with the flood of zombie games currently on the market, Zombie Revenge still stands as my favorite zombie beat ’em up, and Dreamcast-y or not, I want more of it. Hopefully I’ve done a good job in explaining why.

If not, please “forgive me”.