A puzzle game combining two decidedly dissimilar things (namely, Yoshi and baking), Yoshi’s Cookie, while not as ingenious as Tetris nor as charming as Dr. Mario, nonetheless retains a certain allure even today, nearly 15 years after its release.

Want the lowdown on this 16-bit testament to gluttony? Hit the jump. 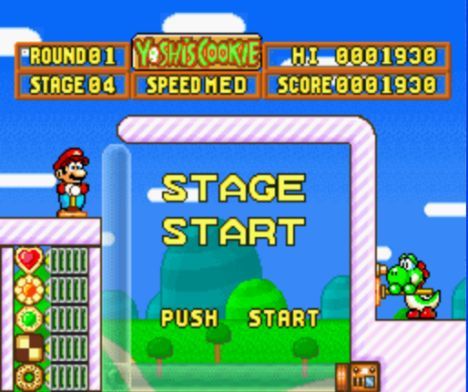 Nope. It’s a puzzle game, for crying out loud — I assume you don’t play Dr. Mario for the riveting character development.

I’m sure the instruction manual contained some half-assed attempt at rationalizing Yoshi’s cookie addiction (something along the lines of, “Mario and Yoshi build a cookie factory! Can you help our daring duo meet their cookery quota?”), but, for all intents and purposes, this game doesn’t have or need a plot. 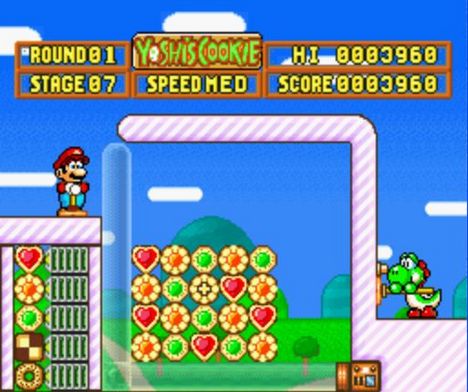 In terms of its basic gameplay mechanics, Yoshi’s Cookie revolves around shifting rows and columns of differently-patterned blocks (which evidently turn out to be cookies, if only because Yoshi’s Rows and Columns of Differently-Patterned Blocks probably wouldn’t sell all that well) in order to make continuous lines of matching cookies, which then disappear from the playing area.

There are two main modes in Yoshi’s Cookie: “action,” and “puzzle.”  The action mode functions much like a regular puzzle game, where the player is given a set number of cookies to begin with and must make lines as quickly as possible as more and more cookies are added to the original grouping. There’s really not much to say about the action mode — it gets harder as it goes on and you’ll frequently find yourself in that “puzzle game panic” where more and more cookies are added, filling up more and more of the playing area, as you panic to match up similar types of cookies in order to free up some space.

The puzzle mode is an uber-linear gameplay mode, where each stage comes with a predetermined block of cookies, and the player is given a set number of moves with which to complete the puzzle. Each puzzle can only be completed in one way, and making even one wrong move usually means that the player is totally, utterly screwed. After completion of a stage, the game has the kindness to provide the player with a password — remember when we still used those? Ah, the good old days. 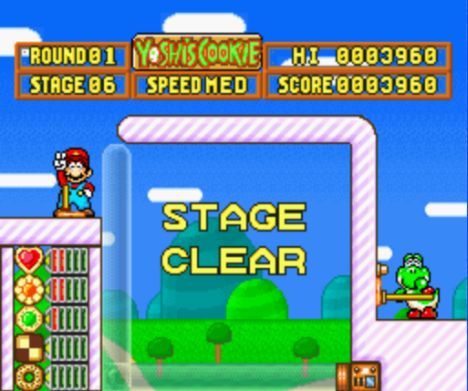 Yoshi’s Cookie is another one of those games that, while published by Nintendo, wasn’t actually developed by them: in fact, the game was created by a little-known developer named Bullet-Proof Software. Originally developed under the title Hermetica, the game had no connection to the Mario universe, or even Nintendo in general — not unlike Doki-Doki Panic, aka Super Mario Bros 2.

As for why you haven’t played it, there are many numerous reasons, none of them definitive. Possibly because it was released at nearly the same time as Yoshi’s Safari, an on-rails SNES shooter that, in all its mediocrity,  may have temporarily sullied Yoshi’s reputation. Or perhaps its relative obscurity can simply be chalked up to widespread gamer ambivalence toward puzzle games. Or, even more likely, its forgotten status may be due to the fact that in comparison to other Nintendo-published puzzle games, it just wasn’t that great. The Bullet-Proof-developed sprites for Yoshi and Mario looked weird, the puzzles were generally much more linear than those found in Tetris or Dr. Mario, and the music was really damn weird.

Still, though, the game is compulsively playable even today: if you’re deeply in need for a puzzle fix, you can find the game on eBay for 10 bucks or less, depending on which system you want it for. The NES version has better controls, but the SNES version has more modes of play and, generally, more features.