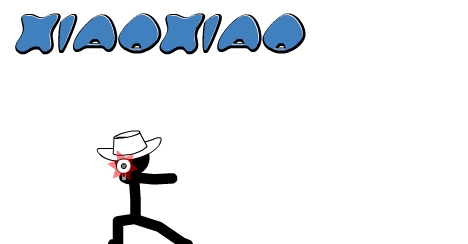 There was a time — some might call it 2001 — where flash animations were truly the bee’s knees. Neither indie games nor viral videos had become the powerhouses they are today, and thus it was up to the regular contributors at Newgrounds and Albinoblacksheep to provide the bored denizens of the Internet with something to do while ignoring work.

In this atmosphere of boredom and mediocrity, it was only appropriate that the laziest of art styles (stick men) and the laziest of narratives (people killing each other) combined to form one of the most prolific and entertaining flash series of the early 00’s: Xiao Xiao.

Though the series initially started off with a few noninteractive fight scene animations, it eventually branched off into reflex games, side-scrolling brawlers and, most entertainingly, a Virtua Cop ripoff.

Xiao Xiao has sort of an interesting history. The very first Xiao flick was a hand-drawn AVI video converted into Flash, which increased its popularity tenfold. The second Xiao Xiao movie was not a movie at all, but rather a series of timing-based minigames that rewarded the player with neato fight scenes. The third was another straight animation, the fourth was an arcade-style shooter, part five was noninteractive, part six wasn’t, seven and eight focused more on gunplay than kung fu, and the ninth (and final) was a Final Fight-esque beatemup.

It was, if nothing else, a pretty exhilirating series to follow. You never really knew what was coming next: would we get another awesomely choreographed fight scene, or an even cooler game of some sort? If the latter, what sort of game would it be? The series was united by the one thing a teenage boy would never get tired of (consequenceless violence), but the ever-varying forms it took kept it fresh and interesting for its relatively large fanbase.

Actual Xiao Xiao gameplay was, generally, not that interesting. Part four’s mechanics didn’t extend beyond “shoot stuff and occasionally hit the reload” button, and that was one of the deeper games.

No, the real fun of the Xiao Xiao games came from their pacing, and the creator’s knowledge of his audience. In a world where wifi and cable modems were not quite as ubiquitous as they are now, the games’ small file sizes lended themselves to short load times. They took the visual fluidity of the games and combined them with the bare minimum interactivity in order to make the player feel like they were taking part in a true Xiao Xiao animation. None of the individual episodes were particularly mindblowing, but they all felt fresh and fun in a way that most other flash series just plain didn’t a decade ago.

The key words in the previous sentence were, “a decade ago.” For better or worse — probably better — we’ve moved away from fetishizing stickman violence in all its incarnations. It still helps to have the fluid animation and good choreography the Xiao Xiao flicks and games so adequately dealt in, but connections are faster and expectations are larger. Simple stickmen and halfhearted gameplay don’t cut it anymore. To be honest, it’s not even worth revisiting the old Xiao Xiao games for any reasons beyond nostalgic ones; they’re an artifact from an era of Internet entertainment that, thankfully, does not exist anymore.

Granted, the hole that existed when Xiao Xiao became passe has since been filled by a hundred and fifty goddamn castle defense and zombie shooter games, so maybe we haven’t progressed that much after all.