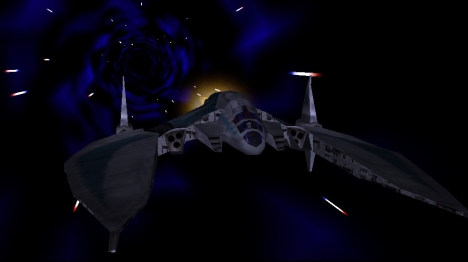 Here is everything you need to know about Tachyon: The Fringe:

The main character is voiced by Bruce Campbell, and he pilots what essentially amounts to a Battlestar Galactica Viper ship.

It’s also a legitimately entertaining game in its own right, but the few times I’ve heard this game mentioned positively on message boards, the words “Bruce Motherf*cking Campbell” are not usually far away. Fans don’t focus on the branching storyline, or the hybridized flight sim/action game elements, or, you know, anything about the actual gameplay. Bruce Campbell. Battlestar Galactica. Period.

Hell, perhaps that enough. Tachyon is less of a mindblowing cult classic than it is a surprisingly entertaining artifact of a practically dead game genre. Hit the jump to find out why.

Bruce Campbell in a Colonial Viper.

Bruce Campbell, in a Colonial Viper.

Tachyon: The Fringe comes from a time where PC gamers used joysticks, space sims were popular, and games used every goddamn button on the keyboard. It’s a bit too complex to be a pick-up-and-play space shooter in the vein of Freelancer, but it’s also too simple to be considered a full-on space sim in the way that, say, X-Wing vs Tie Fighter is. Tachyon: The Fringe is a moderately entertaining spaceship action game at best, and a Wing Commander ripoff at worst.

But it also has Bruce Campbell piloting a Colonial Viper.

Bruce acts more or less exactly as one would expect him to, but the Galactica-esque ship he pilots is the real star of the show. While Tachyon does almost nothing new in 90% of its mechanics, the ship’s ability to “slide” — that is, move in one direction while turning and firing in another as your momentum carries you forward — actually makes the dogfights a hell of a lot more unusual and entertaining than they have any right to be.

Hell, the two Battlestar Galactica games never even bothered to implement a “slide” for their ships; Tachyon almost functions as the true licensed  Galactica title that never was. The branching story may be simplistic yet underwhelming, and the wingman mechanic is kind of cool, but it’s the slide mechanic that really gives Tachyon what allure it still has. It’s just plain satisfying to make a complete 180 during a chase while still moving in the same direction, suddenly transforming from hunted to hunter as your pursuer slides between your crosshairs and is subsequently blasted out of the sky. It’s not really fun for more than a few hours, but it’s definitely enjoyable in the short term.

Incidentally, that could also be said of Bruce Campbell.