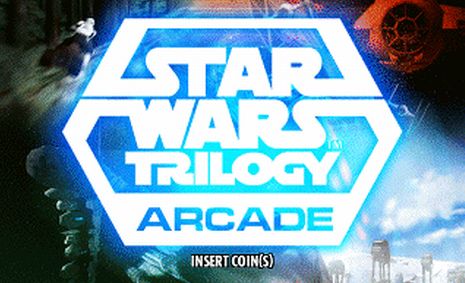 Before you start happily typing in “nobody forgot this game, dumbass,” let me admit something: I made a mistake, naming this series “games time forgot.” Instead of “games that are old that people no longer play on a regular basis, which still have something interesting to contribute to games as a historical art form,” you’ve all (quite rightfully) assumed that every week will aimplt highlight a new game that either nobody’s ever heard of, or that you’ve literally forgotten about.

But it’s too late to change now. Probably. Either way, your irritation will pass.

Everyone on the planet has probably played this week’s game: its sit-down cabinet is so enormous, the promise of its title so alluring, that we’ve all pushed at least fifty cents into it at some point or another. It’s familiar, and it’s recent — no real nostalgia potential, here.

Yet, it also represents something very interesting in the history of Star Wars licensed games. Where older SW games like the Star Wars 1983 arcade game  or the Super Star Wars series were all about retro gameplay and no story, and where newer , say, Knights of the Old Republic focuses more on story than gameplay, Star Wars Trilogy represents the interesting, sort-of successful midpoint between these two design philosophies.

Hit the jump to see what I mean and then bitch about how you still remember this game.

Each film from the original trilogy includes at least two missions: one awesome, the other more awesome.

The Empire Strikes Back tasks the player with completing Luke’s Jedi training on Dagobah, and navigating an asteroid field.

Nah, I’m just fucking with you. Both levels are Hoth. Of course they’re Hoth. First, the actual battle, then an on-foot escape from Echo Base.

Return of the Jedi‘s levels re-enact the Endor speeder chase, then an on-foot level as you approach the Death Star shield generator, then a fight against an AT-ST.

Once you’ve finished all three movies, you get to blow up the Second Death Star.

Most awesomely, after beating each movie you’re treated to a lightsaber bonus level. In the first, you get to deflect blaster bolts back at Boba Fett before thwacking him in the face, and in the second you fight Darth Vader in the Emperor’s Throne room.

It’s the 1983 arcade game, only moving your cursor doesn’t move your ship. It’s a completely standard on-rails shooter, except you have a joystick and an “oh shit” button (which summons some completely inept, AI-controlled help) instead of a pistol. It doesn’t control particularly well most of the time, considering the game often requires you to fire at things with pinpoint aim and the joystick (especially if it’s been used often) can be less than 100% accurate.

More interesting, however, are the aforementioned bonus missions. Though they’re kind of clunky and linear, with big red and green arrows informing the player where to move the lightsaber in order to block an attack or score a hit, they actually feel kind of good. Perhaps it’s the fact that holding a joystick just sort of feels like holding a lightsaber, but the bonus levels are really more of a delight than a fair few of the main missions.

Also, it’s worth pointing out that since the sit-down cabinet is so goddamn big, and since kids love Star Wars so much, this is the rare decade-old arcade game that may still demand 75 cents per play at your local arcade, if you can find one. The game’s difficulty can also be tweaked by the arcade owner, so god help you if you find a really expensive version of the machine — the staff probably cranked up the difficulty to keep you feeding in quarters.

It’s an arcade game, and no console ports were ever made. Whatever.

What’s kind of neat about SW Trilogy Arcade is that it tries, and sort of succeeds, at pleasing both sorts of Star Wars fans. Those who just want simple, engaging gameplay can revel in the shooting and lightsaber-ing. Those who want to re-enact the greatest moments from the Star Wars trilogy, to feel like they’re really a part of the universe, are afforded such a luxury by the varied, trilogy-spanning missions and situations. The story drives the gameplay, but the gameplay rarely has to sacrifice much for the story (which is, let’s say, not exactly the case with the post-NGE Star Wars Galaxies).

Star Wars Trilogy Arcade serves as the midpoint between old Star Wars games and new — between a time where gameplay was more important than story, to the current sensibilites that Star Wars games should be more about immersion and story than having fun blowing stuff up.

I personally prefer the other Star Wars games to Trilogy Arcade for this very reason — those early and recent games made clear decisions as to what they wanted to be and why, while Trilogy Arcade feels kind of like a noncommital hybrid.

Still, it’s pretty fun, and I try to play it whenever I get the chance (assuming a douchebag arcade manager hasn’t jacked up both the price and difficulty).