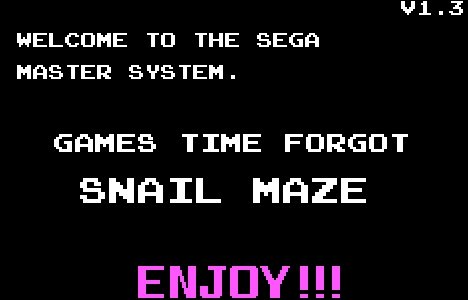 Back in the 1980s, my mother chose to purchase a Nintendo Entertainment System for her very first home console. Meanwhile, her sister took the road less traveled and bought a Sega Master System. While the NES remained my favorite source of videogames during the 8-bit era, I enjoyed the trips to my aunt’s because I could play her strange black and red videogame box. Even though I could not comprehend all the technical differences between the two systems at the time, I could tell that the Master System was something special.

I tried all of the games that my dear aunt accumulated, but sadly, after all the Nintendo I had been fed at home, playing games like Space Harrier and Golden Axe felt almost foreign to me. It would still be a few years before I would have the Genesis and Sonic the Hedgehog to ease me into my eventual preference of Sega over Nintendo, but I owe my earliest push toward Sega-made consoles to the teeniest little game that was tucked away inside the Master System.

That game was Snail Maze, and unless you had a Master System early on, you’ve probably never heard of it.

Story: You are a yellow shelled snail who must navigate extremely complex labyrinths. If you do not find your way out of the maze before the clock ticks down to zero, you are dumped back at the start of the very first level. The snail’s motivation for getting through these mazes is impossible to tell without any form of back story or graphical representation, but we can boil it down to a few assumptions based on the fears of snails:

Gameplay: In order to access the game, you must turn on the Master System without a cartridge inserted, and hold up and buttons 1 and 2 simultaneously. Once this is done, things get quite simple as far as controls go. No buttons other than the D-pad are ever used as you work your way through each maze. But don’t let this fool you into thinking that Snail Maze is an easy game.

The mazes progressively get harder, and the time given to complete them gets smaller. Later levels become quite a lot like a game of Mega Man in respect to memorization and perfection. If you take a wrong turn on a high-numbered level of Snail Maze, you might as well just restart the Master System and start from the beginning, because there is very little room to make a mistake.

Why you’re probably not playing it: There is almost no reason to have the required amount of drive needed to master all 12 of Snail Maze‘s mazes. Going back to the Mega Man comparison, Snail Maze is different than the ball-busting platformer in that there is very little reward given for your commitment. You do not gain any cool weapons or even a change in music. It is difficult, and the only thing that might keep you playing is the anger you feel when you can’t beat such a seemingly easy game.

On another note, Snail Maze was never released in cartridge form, and was only available in its hidden form on the original model of the Master System. Later models dropped Snail Maze in favor of putting full games into the system BIOS such as the Master System version of Sonic the Hedgehog and Hang On/Safari Hunt. Mix this up with the fact that the Master System was not the system of choice for many early gamers, and you’ve got a recipe for What the Heck is Snail Maze.

But the game did have its audience back when it was new, which included me. As a young child, I found that Snail Maze was a much easier game to pick up than many other Sega titles. I would spend hours navigating the mazes, even though I could never get past the fourth or fifth level. It had an odd element of addictiveness that kept me and many other kids going.

There are actually still a few die-hard fans of the game who fight to keep its memory alive and catchy tune embedded in everyone’s minds. One went as far to make an exact replica of the game in Flash format. I can’t do anything like that to bring the game back up to the light for a moment, but what I can do is write a Games Time Forgot article.

Nintendo games had many secrets buried within them, but there was never anything secret about the console itself. This is where the Master System trumped its competition, in my young eyes: the system had these hidden games built right into its BIOS. The concept that there did not have to be a cartridge inserted to play something on the Master System was like magic to me, and I admit that this has a lot to do with why I loved the game so. Now that I look back on the game, it impresses me in a different way. The inclusion of Snail Maze shows how much tender loving care that Sega once put into its consoles.

Snail Maze may not be the greatest game ever made, but it is an important part of both videogame history and the fondest memories of many Master System owners.