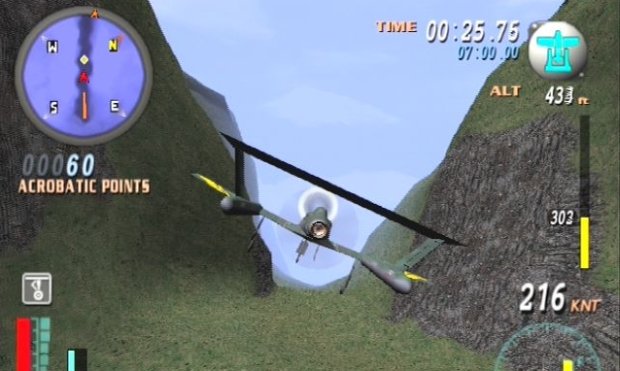 Sky Odyssey is an incredibly simple, focused, flight game for the PlayStation 2 that is far more exciting and immersive than it really has any right to be. Though the controls are simple and easy to pick up, playing Sky Odyssey makes you feel like you’re actually flying a plane. The act of getting a mid-air refuel is one of nail-biting intensity. Dropping off care packages from two thousand feet somehow becomes immersive and exhilarating.

There’s no combat whatsoever in Sky Odyssey, and yet it is still one of the most immersive and entertaining flight-based games I’ve ever played.

Hit the jump as I attempt to describe what makes it so great.

Imagine an Indiana Jones movie, except realistic and centering almost entirely around the operation of small aircraft. In Sky Odyssey‘s adventure mode, your character is tasked with hopping around the globe to find pieces of a secret map that lead to a hidden tower called Maximus, which is presumably filled with treasure and stuff.

During your journeys, you will run into such hazards as:

– nothing even remotely approaching combat, ever

Imagine Pilotwings, but more realistic, more linear, and with fewer controllable vehicles. Though the previous sentence might sound like a condemnation, it’s anything but: Sky Odyssey simulates the feeling of piloting a plane so well, and so damn intuitively, that I was more than pleased to spend the entirety of the game’s length going through different scenarios with the three planes I had under my disposal

Where realism is concerned, Sky Odyssey hits a sweet spot most games only dream of. It’s just complex enough to require some skill to master the simple act of moving around, but simple enough that you’ll never have to memorize a hundred button combinations, or memorize really specific and rare variables like you might in a “real” flight simulator. Sky Odyssey allows the player to feel the thrill and basic physics of real flying, without bogging you down in unintuitive minutiae.

I’d liken it to skate. Where the Tony Hawk Pro Skater franchise was about pulling off ludicrously unrealistic moves, skate implemented an intuitive but remarkably complex trick system that prioritized the inherent satisfaction of pulling off low-key moves with a degree of actual skill over the easy-but-spectacular tricks of Tony Hawk. Pulling off a frontflip in skate may not have looked particularly flashy, but it felt really satisfying simply because of how difficult such moves were to pull off. An average Tony Hawk player might fly through the air and do eight somersaults and a handstand before landing, but a skate player learned to derive immense joy from completing comparatively smaller tricks with more finesse.

Such is the case with Sky Odyssey when compared to pretty much any flight-based combat game ever made. The act of manuevering your plane in something like Battlestations: Pacific is completely obvious and pain-free, and thus inherently quite boring. Such a game derives its interest factor primarily from blowing stuff up, which is a pretty cheap and easy way to keep the player interested. Sky Odyssey, conversely, includes no combat whatsoever — it’s purely about the inherent challenge of flying different planes in different situations, and the realistic-but-not-confusing nature of those flight mechanics make even the most seemingly mundane missions surprisingly exciting. While flying through a narrow cave full of stalactites, I found myself actually panicked with tense fear as I weaved my biplane around the numerous stone outcroppings that threatened to demolish my plane. I once gasped — actually gasped — while riding air currents through an increasingly violent storm in order to reach my destination by sundown. Despite its incredibly simplistic exterior, Sky Odyssey wrings suspense and satisfaction out of moments like getting a mid-air refuel from a train car, or flying over a mountaintop.

I’m sure it still sounds positively boring and unconvincing, but really — for maybe the first time in my adult life, I actually found the experience of flying through a virtual sky exciting.

Because it’s a flight game with no combat. It’s got some of the ugliest graphics I’ve ever seen on the PS2 and an irritatingly generic title, but none of that makes the game quite as initially unattractive as the fact that it’s a goddamn flight game without a single explosion. I really like the game, and I still find myself getting bored when I watch gameplay videos, or hear the basic mechanics described by Wikipedia or something.

Getting people interested in something that is realistic, but not violent — especially on the console market — strikes me as an incredibly difficult task. While the game actually reaches a wonderful midpoint between accessibility and naturalism, that same combination may have also made it a damned hard sell. Flight sim fans who strive for realism already had enough games like that on their PCs, and probably wouldn’t have been that interested in Sky Odyssey‘s simplified control scheme. Console owners may have liked the idea of intuitive flying controls, but the idea of realistic, gunfire-free missions probably turned them off to the whole situation. Pilotwings 64 could pull gamers in through its cartoony graphics and first-party pedigree; Sky Odyssey had neither option.

Still, I would highly recommend checking it out. It’s only 100 Goozex points, and goes pretty cheap on eBay as well.