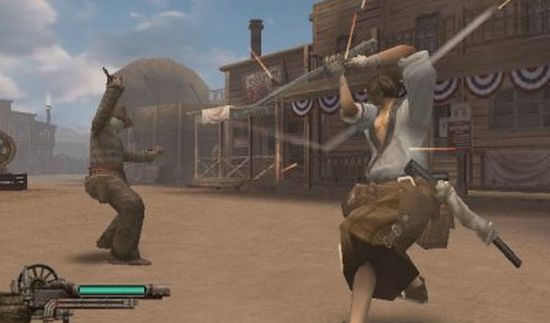 In the modern world, art and media are created for many reasons. Sometimes, an artist yearns to tell a particular story. In other cases, the auteur has a specific idea or message he wishes to convey. But sometimes — and cases like this may be slightly rarer than you think — whomever’s in charge just wants to tell a story where a guy with a sword slices up roughly nine thousand pistol-wielding white people.

This week’s forgotten game, Samurai Western, resulted from the latter school of thought.

It’s surprising, too — why would the same developer that created the realistic, nonlinear Way of the Samurai games decide to do develop an absurdly repetitive, over-the-top (dare I say, “grindhouse”) gaming experience?

Hell if I know, but one thing’s for sure: Samurai Western, while repetitive, simplistic, and not necessarily very good, it’s one of the most fun “bad” games you’ll ever play.

The jump, you must hit her.

Samurai Western begins as a ronin named Gojiro Kiryu stumbles into an unnamed town in the wild, American west. Within roughly thirty seconds of stepping foot inside the town, about a dozen armed men come out and — what else? — threaten to kill him simply because he’s a strangely-dressed Asian. They shoot at him, Gojiro deflects the bullets with his sword, and then proceeds to slaughter every man and woman (yes, there are female enemies — but the developers purposely made all of them  fat, so as to make the player feel less guilty about slicing up members of the fairer sex) in a 200-foot radius.

The game pretty much proceeds like this for the next eight or so hours. As Gojiro Kiryu traverses the widl west in search of his murderous brother Rando, he befriends a rugged cowboy (who can eventually be controlled by a second player) and runs into progressively ridiculous villains (one of whom is played by the Colonel from Metal Gear Solid), ranging from a gay, minigun-toting Frenchman to a mute, childkilling quickdraw artist.

All of the Japanese story conventions are there — flamboyant stereotypes, absurd physics, and boss characters who get sliced down to within an inch of their health before inexplicably chuckling and pronouncing, “We’ll meet again later” before running away and remaining absent for the next few levels. Narratively, the story feels much more like an over-the-top samurai videogame than an actual western; depending on your tastes, that might not be a bad thing.

The Japanese story in a totally western genre and location makes for some satisfyingly odd moments — take the pre-title cutscene, for instance. As a Sergio Leone-esque song plays, a totally black samurai, silhouetted against a bright red background (think of the iPod commercials) approaches three similarly-silhouetted cowboys. They draw and fire, and, in super slow-mo, we see a bullet sail toward the samurai. At the very last moment, the samurai draws and cuts the bullet in half. Suddenly, we hear the stomps of an approaching army. The camera moves, and we see that roughly a hundred cowboys are now marching toward the samurai. They all fire, and — of course — the samurai uses his Super Amazing Asian Speed to deflect every one of the bullets.

That’s the sort of game this is. 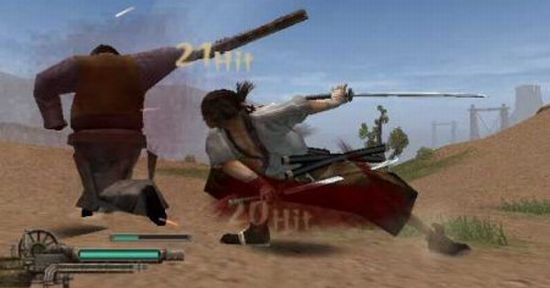 Slashing and dodging. That’s about it.

Samurai Western probably has one of the most simplistic combat mechanics short of a licensed videogame — you press square a lot, and when you aren’t doing that, you press R1 to dodge.

This unabashedly straightforward control scheme proves to be one of the worst, yet most entertaining aspects of Samurai Western. While the repetitive nature of the controls can make the whole experience feel really, really old after a few hours of consecutive play, it perfectly lends itself to short, arcade-y bursts of play. Pick it up, play a level, put it down, then pick it up again tomorrow. So long as Samurai Western‘s running time is spread throughout a week or so, it’s actually pretty damned fun.

Not to mention the undeniable glee of wading into a crowd of shotgun-toting hillbillies as you endlessly pound the square and R1 buttons, slashing and dodging, slashing and dodging, as literal fountains of blood spray into the air and cowboys drop to their knees all around you. Primitive? Yes. Simplistic? Absolutely. Satisfying? You bet your ass. The majority of the game’s entertainment value results from the aesthetic results of the premise: what would it look like if a guy with a sword fought a bunch of guys with guns, slicing and dicing and using his sword as a baseball bat to knock his enemies’ bullets back from whence they came? Thanks to Samurai Western, we know: it’d look unrealistic and over-the-top, but it’d also look pretty damn awesome.

SW also attempts to introduce a few RPG elements into the mix: you can level up individual swords, and completing levels earns wearable items, each with their own attribute bonuses. These items are both awesome-looking and functional — by the end of the game, I had a guitar on my back, an afro on my head, and a lasso on my side, and was all the more powerful for it.

Additionally, I haven’t had a chance to play the two-player co-op mode, but I have to imagine it adds some replay value to the game: can you imagine anything more badass than a samurai/gunman duo blasting and slashing their way through the old west? I sure as hell can’t.

But as said earlier, do not play this game for more than an hour at a time, and do not expect anything particularly special out of it. It’s a shallow, light, fun action romp, and nothing else. 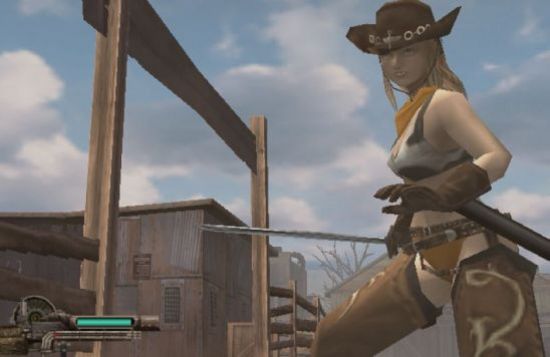 I could deliver an elongated spiel about how Samurai Western‘s marketing was poor, or how its status as a seemingly Japanese intrusion on an American genre made it feel horribly distancing, or how its substandard graphics made it an ineligible competitor in today’s action game market, but, when it comes down to it, all of that is BS: the reason most people haven’t played Samurai Western is because reviewers told them not to.

And I don’t necessarily disagree with the reviewers, either: if I had to rate this game on a scale of one to ten, it would undoubtedly land within the sub-5 range. I still like the game, as the aesthetics and the arcade-style gameplay can feel very enjoyable if spread out over an appropriate amount of time, but it has to be said that the majority of people who might pick up Samurai Western will find it supremely mediocre.

But with all this in mind, is Samurai Western still worth your trouble? It depends — are you willing to ignore some insanely simplistic gameplay solely for the satisfaction that results from slicing a cowboy’s throat and bathing in the arterial spray as he croaks out his last words: “Who…are…you?” If yes, you’ll probably derive some enjoyment out of Samurai Western. If not, I really don’t blame you. Still, it’s only 300 points on Goozex and about 5 bucks on eBay. Worth considering.