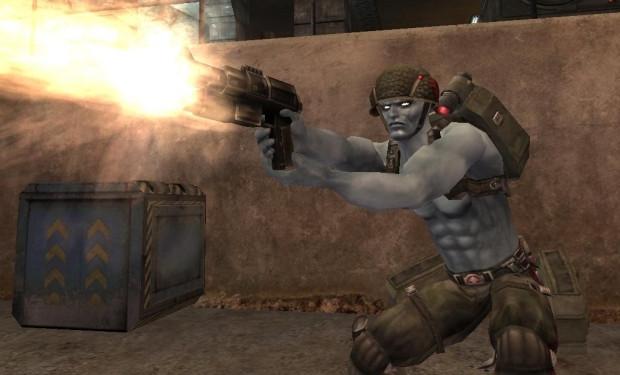 I only ever got to read a single issue of 2000AD, and I understood the stories within it about as well as one can understand four different narratives halfway through their story arcs, without any prior knowledge of the characters or situations. Other than that, though, I liked it.

I’m somewhat bummed that I never got to read any Rogue Trooper strips, because then I might have something more profound or intelligent to say about this week’s forgotten game than “this is a pretty good but flawed game that should have received more attention than it did.”

…Still, this is a pretty good but flawed game that should have received more attention than it did.

Despite some crappy level design and less-than-enthralling graphics, Rogue Trooper is a remarkably solid 3rd-person shooter that simply came out too late for its own good.

Hit the jump for the lowdown on this underrated kinda-classic.

The titular Rogue Trooper is one of an army of genetically engineered clone troops, who are dropped onto a planet called Nu-Earth to fight the Nort army. I guess they get betrayed by their own high command and Rogue has to kill the crap out of his former employers, or something.

The coolest thing about the story of Rogue Trooper — arguably the only cool thing, based on what I got from the videogame — is the fact that after Rogue’s friends get torn apart by gunfire, he plants their personality chips into his equipment so he can not only continue to talk to them, but use their respective talents to modify his existing weaponry. After his fortunately-named friend Gunnar dies, Rogue can plop his main weapon down wherever he wants and it’ll function like an automated turret. Sort of like the Laptop Gun from Perfect Dark, but with a personality.

Moreso than any game I’ve played short of Mirror’s Edge, Rogue Trooper‘s intrinsically satisfying mechanics are set against level design that seeks to undermine them at nearly every turn. Rogue can switch between his regular machine gun, shotgun, and sniper rifle instantaneously, because they’re all a part of the same gun; this can lead to some satisfyingly fast-paced fights where you’ll mow down a half-dozen dudes with rapid fire, then immediately press down on the right thumbstick to active sniper mode and finish off the last two. When used in tandem, the weapons build a pace that would befit a game like Serious Sam or Smash TV: lots of enemies, lots of gunfire, no time to catch your breath and relax.

This makes it all the more disappointing that Rogue Trooper is a pretty standard 3rd-person shooter, otherwise. You’ll rarely come across more than five or six enemies at one time, and you’ll be forced through linear levels with boring “activate this crane, then backtrack across the level and run across the bridge you just made with it” objectives.

Every once in a while, though, the level design will pick up — just for a second — and you’ll be blasting away at a large group of baddies with the reckless aplomb so befitting the Rogue Trooper’s arsenal.

Beyond moments such as that, Rogue Trooper actually dabbles in some light stealth and RPG elements, which surprisingly don’t detract from the overall experience. You’re never outright forced to be stealthy, so every silent kill feels like a real accomplishment than an obligation. You can buy more advanced weaponry by picking up the guns of dead soldiers, which contributes to a relatively satisfying feeling of power progression as the game wears on.

Overall, I’d call Rogue Trooper a solid game. I dunno why, but something about that adjective just feels appropriate: its base mechanics are wonderful, but the level design squanders them more often than not. The act of playing the game through is a wholly satisfying one, but seldom mindblowing. There’s a lot of potential here that I’d love to see further explored in a sequel, but I highly doubt we’ll ever see one.

Rogue Trooper sadly came out pretty late in the sixth console generation, just as our attentions were beginning to focus on the Next Big Thing that was the Xbox 360.

Additionally, Rogue Trooper isn’t exactly a blockbuster franchise. The only other recent game to be based of a 2000AD comic, Judge Dredd: Dredd vs. Death, sucked complete balls. I doubt that had a huge impact on public perception of the Rogue Trooper game, but it certainly couldn’t have helped. There was talk of a Wii port, but as of yet there’s been no new news regarding a North American release.

Either way, the game only costs 100 Goozex points regardless of which platform you want it on (PS2, Xbox, PC). For that price, I’d highly recommend checking it out.