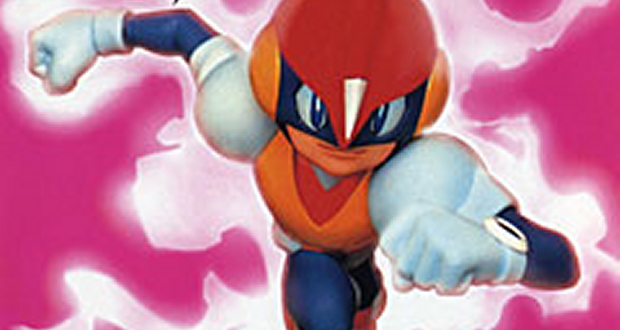 Every Wednesday, we highlight rarely-remembered but interesting games for our “Games Time Forgot” series.

As an American, I feel a little weird writing this week’s Games Time Forgot column on a game that has never made it over to the shores of the United States, but I’d really like to take this opportunity to talk about a Japanese game called Pulseman.

Here’s the lowdown: Pulseman is a pretty well-loved platformer by those who have had the opportunity to play it. It was made late in the life of the Mega Drive by popular developer Game Freak, and released only in Japan. It is possibly the most beautiful game for the system, and it ain’t half bad to play either.

What is this game? How do I know it’s forgotten if I’m not Japanese? I probably don’t, but you can read more about Pulseman and why I believe it qualifies past the jump anyway.

Story: It all begins when a scientist named Doc Yoshiyama programs a new brand of artificial intelligence he calls C-Life. The first “person” created with this AI is a woman who is capable of thinking and feeling. After spending so much time working on this digital woman, Yoshiyama falls in love with her and downloads himself into the computer so that they can be together. While he is happy for a while, and even has a child with her, the decision to live in cyberspace is ultimately a bad one, as his mind becomes corrupted after spending too much time there. He eventually returns to the real world, changes his name to Doc Waruyama, and starts wrecking the place with his robotic creations.

The half human, half C-Life son of Yoshiyama, Pulseman, is around 16 years old by the time his father begins to terrorize the human world. Because of his heritage, he is able to freely travel through both worlds. This makes him the only person in the world capable of stopping his father and his group of troublemakers, the Galaxy Gang.

Gameplay: Outwardly, Pulseman looks like a Mega Man clone. But other than the ball of energy the titular hero can shoot from his hand, they are two very different characters and games. Pulseman is quite a bit bigger and more red than Mega Man, but he is also much weaker, only being able to withstand three hits from enemies before dying. There are health restorative items scattered across the levels, but they only restore one hit point.

The biggest difference lies with Pulseman’s dependency on electricity. He always has a small electrical attack, but with enough stored power, the attack changes in appearance and functionality. Electricity can be generated either by running long distances without stopping, or by performing a dash move with two taps of the directional pad. The charged attack does not do more damage than the uncharged one, but it does travel through enemies, giving Pulseman the ability to hit many enemies with just one shot. He also has a low kick and jump kick.

Pulseman can jump, obviously, but not very high. This is where an electrical charge comes in handy again. After generating some energy, a move called the Volteccer (Volt Tackle) can be used. This move shoots Pulseman up into the sky diagonally. While this can give a much needed boost to higher areas of the map, it can also be used to bounce around a level in an invincible ball of sparks. As long as there are solid objects to reflect off of (that aren’t enemies), one could technically stay in the Volteccer form forever. On top of everything else, this form allows Pulseman to travel through things like wires and bolts.

Pulseman is a platformer with all of the above moves at the player’s disposal. The game goes back and forth from the real world to the virtual almost constantly, so that the scenery and gameplay switch up at a nice pace. The levels span all sorts of areas, from a futuristic Japanese city to the Great Barrier Reef, the latter of which is one of a few water levels. Speaking of water, Pulseman is able to swim, but the water greatly hinders his ability to retain electricity. He is unable to do any of his electric attacks while underwater, and can only slap enemies for half the usual damage. This is a very interesting weakness to have to work around at certain points throughout the game.

Why you’re probably not playing it: If you’re American, you’re probably not playing Pulseman because it was never released in cartridge format outside of Japan. We did have a small chance to play it legally — the game graced the Sega Channel as an exclusive for a short while. But this offering was probably for naught. The majority of people (myself included) did not have access to the service because it was limited to very specific areas of the country. Those who did get to play it probably forgot what it was once the Sega Channel was gone.

If you’re any other nationality, you’re probably not playing it for one of several reasons. The first is that it was one of the last games made for the Mega Drive. Like many of the other Games Time Forgot, Pulseman is another solid example of the theory that the closer a console is to its “death”, the less its new games sell. The Sega Saturn was released in Japan the same year, which I can only assume caused many Japanese gamers to leave their Mega Drives and any new games for the system in the dust. The advent of 3D gaming was an especially unfortunate time for any new 2D games, no matter how much advantage the latter games were able to take of their last-gen console.

Another reason is that, again, the game was never released outside of Japan. Or, it wasn’t until about a week ago. On July 3rd, all Wii Virtual Console shops outside of America (and Japan, who already got the game two years ago) saw the release of an untranslated Pulseman. But now that it’s so widely available, does anyone know what this old game is? Will anyone buy it after all these years? Maybe the shiny graphics will attract some people, but who knows how sales will go. If coverage of the release is any indication of how things are going, the game will not sell well at all.

Going back to the game’s relationship with America, there is currently no US release date for the game for VC. Whether or not the game will ever make it here is unknown. It may fall upon the shoulders of Europe; if they see good sales, perhaps the US will also get Pulseman. But really, does anyone even know enough to care either way?

It’s not the best game ever (it’s a little too much style over substance, in my opinion), but those who have played it will tell you that it is a pretty cool game in its own right. But to be what it is (a Mega Drive game that’s nearly on par with the original Sonic games), it’s very strange that its release to the rest of the world happened with such a small amount of fanfare, especially after being confined to Japan for over 15 years.

I actually didn’t know about this VC release until after I started writing this article. I had gone into it with the knowledge that this was a game forgotten by time, but I was having some trouble explaining exactly why because of what little I knew about the game outside of what it is and how it plays. But then I saw mention of the VC release on Wikipedia, and the wheels started to turn. I tried looking for more information on it, but was left pretty empty handed. Why hasn’t anyone said anything about the release of this game to the rest of the world? Sure, Americans are still left out, but (almost) worldwide releases of Japanese games like this one are normally surrounded with plenty of hullaballoo. There hasn’t been so much of a chirp about Pulseman, and that in itself is probably the biggest clue in to its abandoned status.

For whatever reason, Pulseman has long been kept away from the rest of the world. It was denied the chance to become a standout title around the world and transcend time. And today, just like the day it was released, it remains unpromoted and largely ignored. But here at Games Time Forgot, we would like to let all of you know that the title is available for download on the European Virtual Console. You might want to get it.