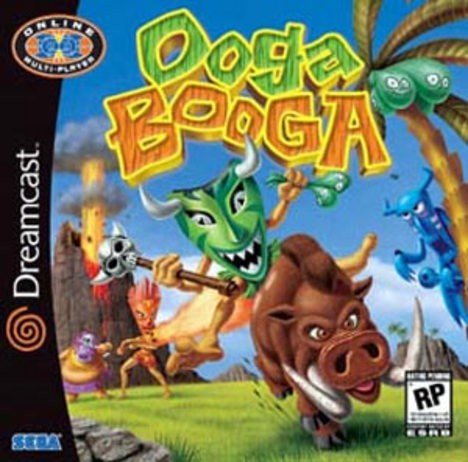 I have to admit: the Dreamcast is one of the few (fairly) recent video game systems I never had the pleasure of owning. I played a few Dreamcast games at a friend’s house now and again, but I never became really intimate with the system’s library.

Hit the jump for the lowdown on a tropical-themed multiplayer extravaganza of violence and sport. 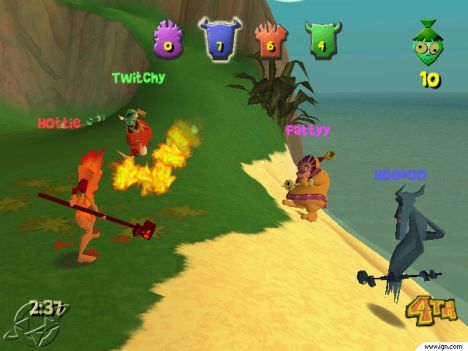 On an unnamed tropical island, four Kahuna tribes vie for supremacy — the magic-using Hoodoos, the fast Twitchies, the well-rounded Hotties, and the aptly named Fatties.

Every full moon, the volcano goddess Ooga Booga arises from a magical island and hosts three different games in order to determine which tribe is the strongest.

That’s pretty much it. Ooga Booga is a party/multiplayer game through and through — who needs plot when you’ve got warthog rodeo? 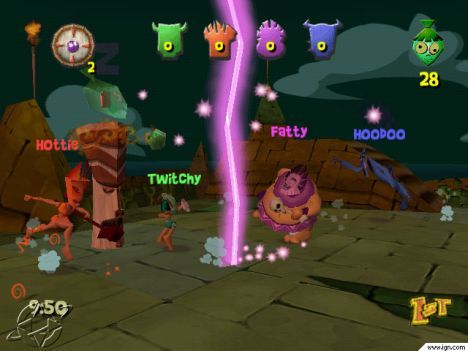 Ooga Booga is a multiplayer mashup of party gaming — sort of. There are only three “minigames” (Smakahuna, Rodeo, and Boar Polo), but these games are very, very indepth, and one could easily separate and package each of the three games separately.

Smakahuna is basically deathmatch, but with a distinctly tropical twist. There are no guns, and, other than your stick, no real melee weapons. Instead, the players are forced to find Shrunken Head Trees (yes, the trees have somehow been genetically cultured to produce shrunken heads), pick the “fruit,” and use it as throwing ammunition in the fight against the other Kahunas. Alternatively, players can use their shrunken heads to activate Tikis, which essentially work like autogun tripods. Put the Tiki where you want, let it rip, and enjoy the carnage. Well, not really “carnage,” considering the game is rated E, but you get the idea. Also spicing up the action are magical spells (seen above), and Cataclysm spells, which are basically much more powerful versions of the regular spells. Oh, and you can commandeer vehicles — and by “vehicles,” I mean warthogs and birds — to smash and divebomb your enemies.

Rodeo consists of four Kahunas try to take control of the same boar. Players earn points for smacking people whilst riding the boar, or by smacking the player on top of it. It’s basically King of the Hill, but the hill is a moving, breathing warthog of death.

Boar Polo is exactly what it sounds like. Team members ride on boars and attempt to knock a huge boulder through the opposing team’s goal, either by smacking it with a stick, shooting shrunken heads at it, or using the boar to headbutt it. The boulder has surprisingly accurate physics considering the time period, making this game one of the best in the package.

These games are mostly multiplayer, but thare are Tribal Trials in the singleplayer mode that allow you to unlock more and more characters for use in the multiplayer mode. 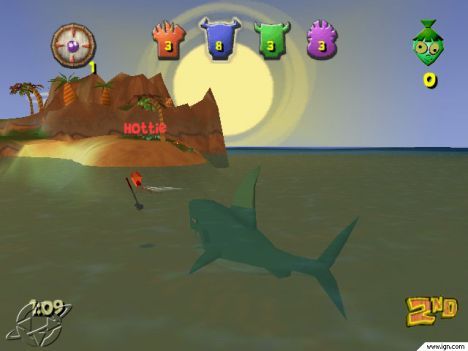 Not only was it released for the doomed Dreamcast, but it was also released near the very end of its life cycle. The end had already begun for Sega’s answer to the PS2, and no game — even one as fantastically fun as Ooga Booga — could change that fact.

People who owned a Dreamcast wouldn’t go out and buy one just so they could play a weirdly-themed game with a silly sounding name, and many existing Dreamcast users soon realized that there just weren’t that many other players to compete with over the Interwebs.

So, should you get it? Maybe, maybe not. It goes for very cheap on eBay (five bucks, not including shipping), but the game’s biggest charm — the multiplayer — is long defunct. If you get Ooga Booga, you’ll mostly be getting it for the singleplayer. That being said: while it’s disappointing that you probably won’t be able to enjoy a good online match, the singleplayer is still decently fun and you can always play split-screen with a friend. Whether you find it on eBay or try to emulate it, I’d highly recommend getting your Booga on.