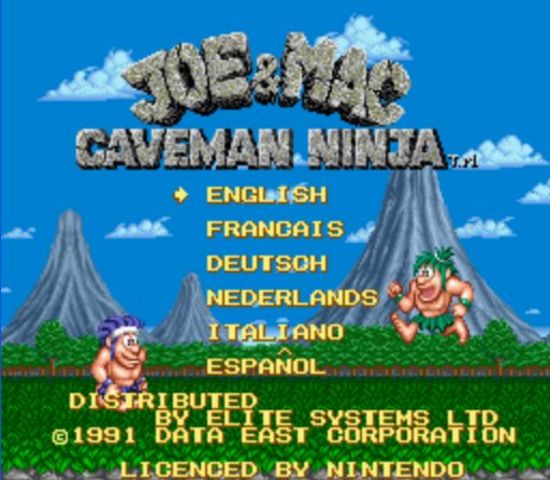 We going obscure on this bitch — this week’s forgotten game is an SNES port of an arcade platformer, and it’s a shallow mishmash of a few different gaming genres that turns out to be decently entertaining.

Joe & Mac is a little bit Contra, a little bit Mario, and a little bit Street Fighter. It also holds a special place in my heart, as it was one of the first games I ever owned for my Super Nintendo, and (unfortunately) the first game I ever sold to anyone. If you’re a fan of scantily clad men running around and hitting one-dimensional enemies with phallic symbols — in other words, if you enjoyed 300 — you’ll probably dig Joe & Mac.

The green-haired one is Joe. The other one is Mac. 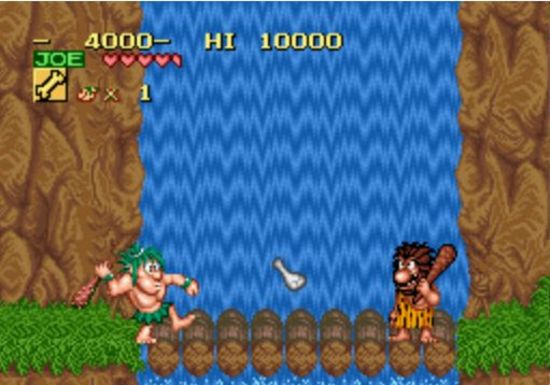 Joe & Mac, referred to from this point on as Joe and Mac because I can’t stand having to find the ampersand on my keyboard, is an action platformer: as said before the jump, it melds the jumping and platforming of Super Mario with the numerous enemies, upgrades, and projectile weapons of Contra. Each side-scrolling level simply consists of a myriad of prehistoric beasts attacking Joe and Mac, who have to thwack and thwomp their way to the end boss. All in all, pretty standard stuff.

This is usually the point in the article where I’d say “except for the fact that _____.” But I can’t really use that sentence in reference to Joe and Mac, because there’s really not much that separates it from the pack of numerous arcade ports available on the SNES: while it does meld a few different action genres together, it does them so seamlessly that it feels totally familiar. Even when I played it as a child, I didn’t stop to think, “Wow! This is like if you mixed Bubsy the Bobcat with Robocop vs Terminator!”*

That being said, it’s still a solid experience: while the controls are too loose (especially considering the number of tricky jumps one has to make throughout the game) and the levels far too short (level 3 lasts literally about 30 seconds), Joe and Mac typifies the flawed-yet-entertaining arcade gameplay so common to the early-to-mid-90’s. In co-op mode, friendly fire is always on: as a result, the first and second player can completely ignore the platforming aspect and essentially transform the game into one giant round of Street Figher. Given the limited amount of moves and powerups (there are about five different projectile weapons, two different kinds of jumps, and a roll manuever), part of the fun to be had is exploiting the resources of the level to beat the crap out of the other player. Truth be told, the game is actually more fun as a PvP fighter than a co-op platformer. Though this shouldn’t suggest one cannot meld the two genres: fight your way to the end-level boss cooperatively, then turn on each other at the moment it appears and turn the entire affair into one huge free-for-all.

Oh, and when your character dies, you can control his floating spirit as it leaves his body, which — in certain areas — can result in achieving otherwise unobtainable powerups. All things considered, there’s something to be said for a game that considers death as just another opportunity to achieve something previously impossible. Very transcendental, if you ask me.

Which, all things considered, you probably shouldn’t. 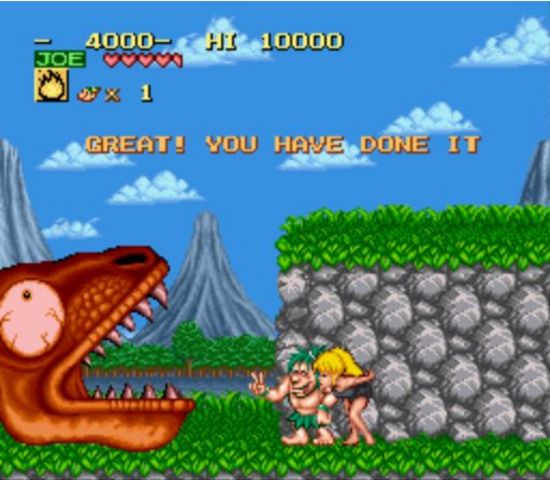 Admittedly, the game was popular enough to warrant multiple ports (SNES, Genesis, NES, Game Boy, Amiga, PC) and a sequel: at the time of its release, it was frequently played, and moderately appreciated.

Still, I’ve had a hard time finding people who still remember it. Hell, my sister and I used to play this all the time, and even after playing the game in front of her, she couldn’t dig up a single memory of the times we spent playing this game cooperatively. This might be due more to the inexorable march of time than anything else, but it also probably has something to do with the fact that, for all its quality and unintentionally emergent gameplay, Joe and Mac just doesn’t feel that special. It’s easy to write it off as just another action-platformer, and you wouldn’t even necessarily be wrong to write it off as such: granted, you’d be missing a pretty entertaining side-scroller, but labelling Joe and Mac as “just another ___” wouldn’t put you particularly far off the mark.

*Fun fact: I had goddamned awful taste in videogames as a child.