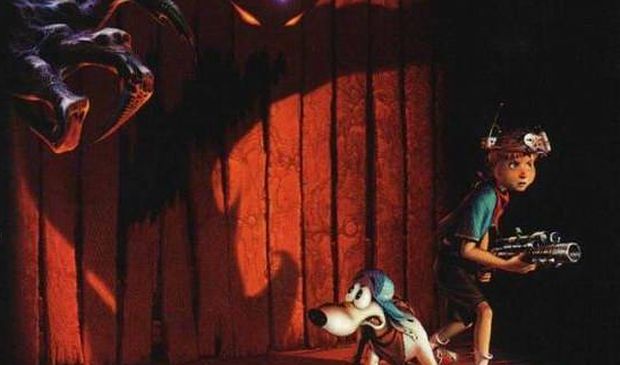 Just to get it out of the way, I have no idea why this game is called Heart of Darkness. It has absolutely nothing to do with the Joseph Conrad novella of the same name, does not take place in Vietnam, and it chronicles the story of a young boy saving his dog from evil, intergalactic aliens.

That said, if you’ve ever played a “cinematic platformer” like Flashback, Out of This World, or Blackthorne, you’ll find much to enjoy in Heart of Darkness. By essentially simplifying the cinematic platformer formula and removing stuff like backtracking, nonlinear levels, or a huge emphasis on combat, Heart of Darkness — despite being unpopular enough to warrant a Games Time Forgot article — may arguably be the greatest work in the entire genre.

That, and it is undoubtedly the single most violent game ever made to still be rated “E for Everyone.”

Hit the jump for some videos that explain what I mean.

Here is every death one can experience in the game strung together into a single video. The first few are pretty boring (drowning, falling from stuff, etc), but then the protagonist — a twelve-year-old boy — gets his neck snapped, is eaten alive, is strangled. Jesus Christ, the protagonist’s age alone should have catapulted the game into the Teen rating at the very minimum.

Yes. Yes, he did just get his leg ripped off by a swamp monster. In a fucking E for Everyone game.

That shit is straight up terrifying, no two ways about it.

Anyway, yeah. The story, as mentioned above the fold, has nothing to do with imperialism or the evil lurking in men’s souls and everything to do with some weird alien conspiracy that steals a kid’s dog. I unfortunately have not yet been able to beat the game since the disc randomly decided to stop working in my PC, but I nonetheless doubt that the game turns into a highly philosophical treatise on human selfishness in its final few hours.

I know Out of this World and Flashback have their fans, but I could never get into either of those games. Pretty as they were, they were just too goddamn punishing and vague for me. I never knew where I was going, or why I kept dying, and all that confusion wears on a man.

That’s why Heart of Darkness is such a refreshing entry in the cinematic platformer genre. It’s just as beautiful as other games in the genre (heck, maybe moreso) and it’s just as filled with violent and sudden death, but it is also a spectacularly forgiving game. There are no huge, nonlinear levels to get lost in, and checkpoints occur with pleasing frequency. During my time with the game, I was almost never confused as to what I needed to do next. Granted, I’d often be very confused regarding how I’d accomplish my next task — the animated backgrounds often make it really difficult to discern what you can and can’t interact with — but the small, linear levels give the game a structural focus reminiscent of Windosill.

The game is pretty damned good at mixing up action sequences and puzzles, as well. During the game’s first few screens, you’ll be blowing away dozens of shadow monsters using the protagonist’s remarkably satisfying lightning gun. Once that gets sadly devoured by a monster, you’ll have to jump and run away from the monsters. Once you’ve escaped them, you’ve got some puzzle solving ahead of you, which leads to another action sequence, and so on and so forth. The three gameplay types also constantly bleed into one another, leading to satisfying (if incredibly difficult) puzzle-platforming sections. Still, you restart pretty instantly after death and the animations are fluid enough that even failing is mildly entertaining in its own way.

Oddworld games aside, the cinematic platformer genre was pretty much done with by 1995, a good three years before Heart of Darkness came out. According to Our Lord and Master Wikipedia, this may be because the game took six friggin’ years to develop thanks to all the orchestral music and 3D animation the game required.

The game is also constantly at odds with itself, which makes its intended audience very unclear. On the one hand, the cover art depicts a young boy and a goofy looking dog being menaced by a shadow monster. This, to me, screams “kid’s game.” On the other hand, Heart of Darkness is insanely goddamn violent, to the point where player traumatization is not only possible, but likely if the player’s age is even remotely near that of the protagonist. Who would rightfully want to play this? Who would be strong enough to handle the horrific death sequences, yet open-minded enough to get past the game’s kiddie exterior? Heart of Darkness is relatively easy to appreciate in hindsight, but I honestly can’t imagine myself actually shelling out money for a game like this back in 1995.

Or, at least, I can’t imagine myself shelling out money without coming back to the store a few days later, crying my eyes out and shaking uncontrollably because I saw a young blonde boy get his spine snapped in two by a winged shadow demon.