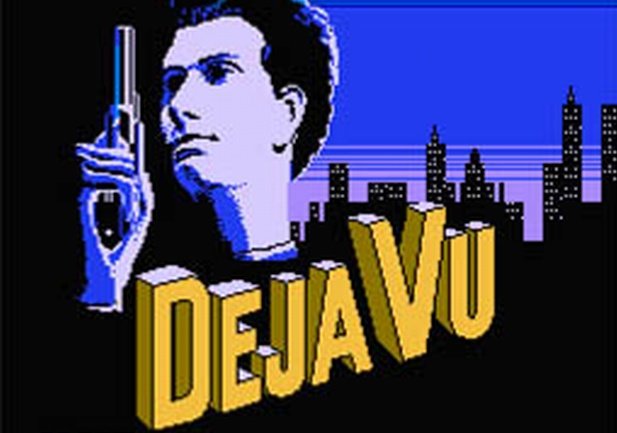 Anyone who’s ever listened to me wax poetic on RetroforceGo! about Shadowgate, the third title in the MacVenture series, already knows I have a hardcore love for anything with a point and click interface. Most people have heard of Shadowgate, as it was the most popular in this series. Slightly less well known is Deja Vu, originally released for the Mac in 1985 and then ported to the NES in 1990.

While Deja Vu follows the same general format as Shadowgate, the inspiration comes from forties era detective novels and noir sensibilities. It’s also believed that Deja Vu may have directly inspired LucasArts in creating Maniac Mansion.Ah, point and click days, how I miss you!

Feeling intrigued, wondering if it’s worth it to back in time and give this one a shot? Follow me past the jump, and I’ll try to help you make your decision.

Of course, no good mystery begins with all or even half of the details, and Deja Vu shoots for just that. In the start of the game, you wake up in a bathroom stall with no recollection of who you are or how you got there. A little exploring reveals that you’re in a bar called Joe’s, there’s a dead man upstairs in the office, and it looks like you’re about to be framed for a murder you didn’t commit (or at least, don’t remember you committed).

Eventually, you’ll discover that you’re Theodore “Ace” Harding, and find yourself with no choice other than to follow a trail of clues to reveal who you are and prove your own innocence. Deja Vu is unique in that it truly challenges you to think laterally to solve some of the puzzles, something I couldn’t put my finger on as a kid but really love about the game looking back in time at it.

I don’t want to ruin any more of the story for you, but I’ll say this: you have to go for a pretty wild ride before you’ll be any closer to solving any of Ace’s problems in this game!

Absolutely nothing about the gameplay in Deja Vu differs from Shadowgate‘s (or for that matter, Uninvited‘s, which was the second entry in the MacVenture series). There’s not too much to tell about point and click adventures: you point to things, you click em, and stuff happens.Deja Vu does have some cool inclusions such as a casino which you can actually play roulette at. The death scenes of Deja Vu are also memorable and worth getting just for the fun of it (go see them here if you like).

Even if the interface is simple, the story in this game is not only engaging but also suspenseful (and also I’d say it’s much better than Shadowgate‘s). Since your memory loss is acute, you’ll have a limited amount of time to figure out the puzzles before you end up totally losing it and hitting a game over. Obviously the game has aged, but I find I can always go back and play this game and enjoy it, even though I solved the mystery long ago.

Also, Deja Vu has excellent, moody music, which contributes nicely to the very believable state of amnesia Ace is in. Most games just throw amnesia in as a weal plot device, but it works really well here, and is detailed down to the items to examine (for instance, you may not recognize an item when you first see it, but as you unravel more of the mystery, examining the same items again will result in a different reaction).

Well, there’s a handful of possible reasons: you don’t like point and click games, you don’t like murder mystery themes, you played Shadowgate but had no idea this game ever existed. I can’t help you much with the first two, but if you really liked Shadowgate you ought to go back and give Deja Vu a shot (and Uninvited too, while you’re at it). Best of all, it’s easily playable on sites such as nintendo8, so you can try it without even shelling out any cash (though it’s also available for 300 Goozex points, if you want a physical copy). I’d be interested to hear what your favorite of the three games are, if you’ve played all three — please share in the comments!