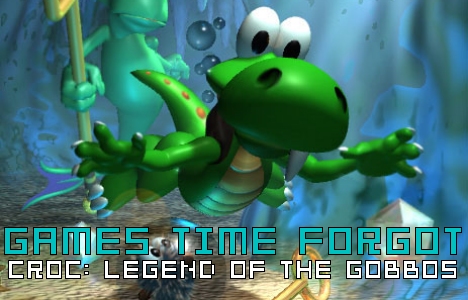 Platformers that used item collecting as goals became all the rage in the mid-to-late 1990s. The trend grew even more rapidly after the advent of 3D graphics for home consoles. Some of them, such as Banjo-Kazooie and Mario 64, set a high standard for all future 3D platformers. Others, like Donkey Kong 64, took the collecting concept a little too far and turned many people off to the genre. Then there were the many other products of the fad, such as Jak and Daxter, Spyro the Dragon, and Ratchet and Clank that saw a lot of success.

And then there were the games like Croc: Legend of the Gobbos.

Like every other developer at the time, Argonaut Software wanted to try their hand at cashing in on the collectathon platformer genre’s popularity. Even though it sold enough copies of the Playstation version to warrant a re-release as a Greatest Hits title, and even spawned a sequel, the game did not beat out its competitors as its creators hoped it would.

Croc was a fairly generic three-dimensional platforming title that drowned in the sea of an oversaturated market more than a decade ago, and today, we will revisit it.

A big bad frog-like creature named Baron Dante has invaded Gobbo Island and captured all of its cute, furry inhabitants, including the Gobbo King. The hero, Croc, must set out to release them and give Baron Dante what for.

If you think you’ve heard a similar plot before, you’re right – many platformers of Croc‘s day and age have you going up against similar looking baddies and collecting weird creatures for whatever reason, if there is one at all. But Croc sets itself apart a little with the main character’s motivation behind all the collecting. According to the backstory, the crocodile was apparently abandoned as a baby and was set to drift off to sea in a basket . He was fortunate enough to wash upon the shore of Gobbo Island, where the Gobbo King took the baby reptile in as his own. The Gobbos are Croc’s loving adoptive family, and he pretty much owes it to them to come to their rescue.

plays a lot like any standard 3D platformer, but with a few differences. He cannot run freely in all directions, but must be turned in the direction you want to go by using left and right (pressing down/back will cause him to move backwards, instead of turning him completely around). There is a button assigned for a quick turn, which comes in handy quite often. Another difference is that while Croc has an attack, he does not have the ability to actually kill anything. Attacking only makes enemies disappear for about a minute before regenerating.

The game consists of four islands, each with eight levels. Six of the levels contain six Gobbos for you to collect. Some of them are caged and require an additional bit of hunting for the key to set them free. Five of them are strewn around the level, while the sixth can only be accessed after finding five special Colored Crystals and opening the Crystal Door at the end of each level.

There are also White Crystals lying around everywhere, but they are surprisingly not a part of the collecting that is necessary to finish 100 percent. Instead, they are used in much the same way as Sonic uses rings. One hit from an enemy will send all of your collected White Crystals flying around you, and a hit without any on hand will cause you to lose a life.

The other two levels in each world are pretty standard boss battles that give the player a break after every three normal levels they traverse.

Why you’re probably not playing it: First of all, the controls feel somewhat stiff and awkward, mostly because the game was developed with the standard Playstation controller in mind. The bosses are, for the most part, laughably easy, while the non-boss levels can be frustratingly hard. This is mostly due to a mixture of the difficulty in learning the controls, a horrible camera, and a numerous amount of small platforms surrounded by abyss that are easy to fall off of.

Secondly, if you are a seasoned gamer, Croc feels like it has nothing to offer that cannot be found elsewhere. It is very simplistic and does nothing to make itself stand out of the crowd. It has cute graphics (check), an animal protagonist wearing a backpack (check), objects with odd names to collect (check), and is set in an environment that has forest, ice, lava, desert, underwater, and castle areas (check). There are many other games of the same genre out there that did all of these same things in a much more exciting way.

But if you can get over the “I’ve been here before” feeling, you may enjoy this rough diamond of a game. It is a great lite version of the item collecting 3D platformer genre for those who loathe being forced to collect every doodad under the sun. Comparitively, there are not that many items that Croc requires you to collect, making the game a smooth ride once you get the controls down. The collecting feels natural and never overwhelming.

This is also one of those games that people tend to play just to hear its music. The theme that plays in most outdoor areas ranks among one of my favorite videogame compositions.

Croc: Legend of the Gobbos may not have been the Mario/Crash Bandicoot/Tomb Raider crusher that it was advertised as being, but it does have its little charms that make it worth mentioning, and even revisiting.