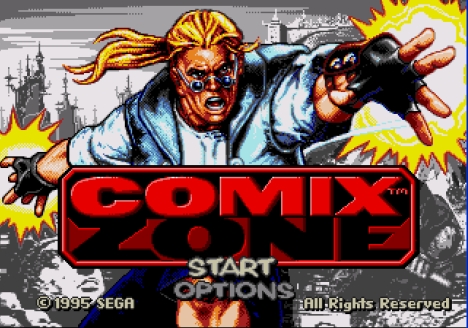 Welcome once again to Games Time Forgot, wherein I attempt to highlight a game too old or obscure to remember, but fail, and am subsequently mocked for it.

I never got to play Comix Zone as a child. Being a Nintendo fanboy, I refused to even touch a Genesis, no matter how potentially interesting its games may have been. Now free of my fanboyism and able to look back at the system’s library with a relatively unbiased viewpoint, I see what I was missing.

Comix Zone is a ridiculously challenging, incredibly clever beatemup that everyone should play at some point in their life. It’s way too hard and really damn short, which makes it essentially perfect for those of us who didn’t get to play it when it was originally released: it’s challenging and inventive enough to work a lot of cool stuff into its few levels, and short enough that you’ll actually be able to finish it.

If you can forgive the fact that the hero (pictured above) is the most ridiculously 90’s protagonist ever, there’s a hell of a lot to love about Comix Zone. Hit the jump for more.

A comic book writer named Sketch starts a new book about evil aliens and monsters and a really hot chick who fights them, or something, and gets sucked into the comic. With the hot chick giving him instructions via radio and the comic’s antagonist drawing enemies and obstacles to kill Sketch at every possible moment, it’s up to Sketch’s Super Fucking 90’s wardrobe and attitude to save the day.

Seriously — the guy is fucking wearing shorts, a vest, and his hair is in a ponytail. A fucking ponytail. And “Sketch” sounds like the name of a rejected character from Barkley, Shut Up and Jam.

Comix Zone is cool because:

All the action takes place in the confines of comic book panels. You’re not a character in a fully realized, consistent world that happens to be based on a comic book (like, say, Separation Anxiety or something) — you’re a dude running around through comic book panels. When you kill everyone in a single panel, you run to the end of your panel and actually jump over the thick white line that divides your panel from the next one.

Similarly, enemies are literally “drawn in” right in front of your eyes, and certain weak panel borders can be broken through by a punch, or a flying enemy. It’s damned satisfying to uppercut an enemy so hard they literally fly backwards and break through the panel border into a different panel. The concept could probably be taken further, but for a Genesis game Comix Zone‘s structure and graphics are damned impressive.

The fighting is pretty good, too. While Sketch only has one attack button he does six different attacks depending on which direction you press on the dpad. Since the enemies you fight are really good at blocking, you have to keep mixing up your attacks. Visually, this makes Sketch look like he’s doing the most badass, complex combos in sidescrolling beatemup history, even though what you’re doing is technically only a few steps above button-mashing.

Comix Zone is kind of irritating because:

For no immediately evident reason, you’re forced to take damage about a dozen times throughout the game. You’ll often find an inanimate object of some sort blocking your path which must be destroyed. As you beat on, let’s say, a locked door, you’ll be surprised to find your goddamn health decreasing. When I looked on Wikipedia and Gamefaqs to see what the hell was going on, I found this pathetic excuse:

“Sketch is capable of tearing shreds out of the backdrop and folding them into paper planes to throw at enemies as a weapon. Because this paper world is also part of everything within Comix Zone (as they are drawn on it), this action takes a significant slice off the player’s health bar.”

Granted, this excerpt is referring to the act of throwing paper planes (which I still do not know how to do), but if the best excuse I can come up with for actively punishing the player just for trying to progress through the goddamn game is a purely plot-related one, then we’ve got a problem.

Comix Zone is hard as balls, but it wouldn’t feel so unfairly hard were it not for this perplexing design decision. Yes, you only get three lives in the entire game (and that’s only assuming you get to the third world) before having to start from the beginning, but the game is only six levels long in the first place.

If only there were some way to, say, play the game in such a way that you could save your play state whenever and wherever you wanted.

It came out pretty late in the Genesis’s lifespan, at the typical point in a system’s run that all its fans assume the remaining titles will probably be crap. Comix Zone would have been a perfect game for the Genesis at nearly any other conceivable time in its lifespan, but given the fact that not too many gamers ended up playing it at the time of its release, we don’t look back on it with the same sort of shared nostalgia that we might for Sonic the Hedgehog.

Or maybe we do, and I’m talking out my ass.

Still, it’s currently available on the Wii Virtual Console if you feel like doing the right thing and playing it legally. Given how goddamn pretty the game is, and how much more potential can be milked from its premise, I can’t help but really, really want a graphically updated (but still 2D) downloadable sequel.