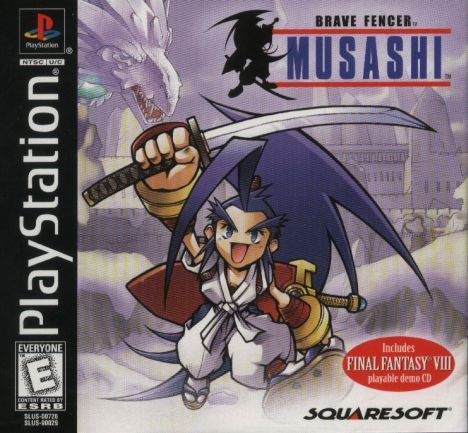 Admittedly, you’ve probably heard of this week’s forgotten game. It was one of the best (if not the best) action RPG titles on the PSOne, it’s got a huge following in Japan, and it’s (very, very, very) loosely based on the story of Miyamoto Musashi, the greatest samurai who ever lived.

Respect your samurai elders, and hit the jump for the lowdown. 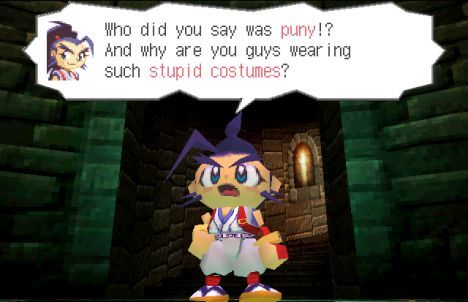 Then Fillet gets her stupid ass kidnapped by Rootrick, the Thirstquencher empire, and it’s up to Musashi to get her back. Cliched? Yes. Boring? Absolutely. Yet there is one thing that is mildly cool about Brave Fencer Musashi‘s storyline, and that’s the way the titular hero reacts to his having been summoned. He actually seems pretty pissed off that he was resurrected without his permission and essentially forced to save a world he has no knowledge of. He never outright refuses to save the world, but it’s frequently obvious that Musashi is only doing \heroic things out of self-preservation (according to Fillet, if the Steamquenchers win, then Musashi dies…or something). 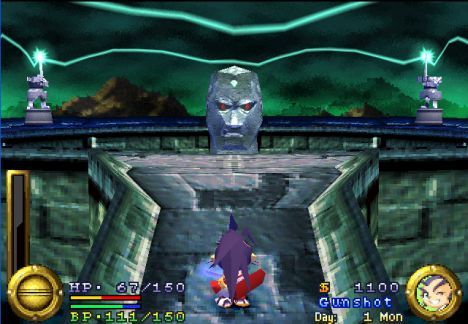 One may be quick to liken Brave Fencer Musashi to Zelda, and though the comparison is warranted (they are, after all, both fantasy action RPGs where the main character uses a magical sword), it really doesn’t show Musashi the respect it deserves. Musashi is definitely its own game, thanks mainly to the player’s ability to absorb the powers of every enemy Musashi meets.

Basically, you hold R1 to charge up Fusion (one of your magical swords), and press square to throw it. When it hits an enemy, the player must tap square as fast as possible for Fusion to absorb the enemy and grant Musashi one of its special powers. It is absolutely necessary to absorb these powers throughout the game, as many puzzles and bosses require Musashi to use abilities beyond those of his own two swords.

For example, a player may need to keep a floor switch held down so he can run through a door. There are no blocks or weights in the room, and though the enemies are heavy enough to keep the switch pressed, they tend to move away from the switch almost immediately after touching it. To solve this problem, Musashi must absorb the “stun” ability from one of the bad guys, wait for an enemy to stand on the switch, and hit him with the stun attack to keep him stationary on that spot. The switch stays down, the door opens, and Musashi is on his way.

The player can only hold one special ability at a time, but they’re extremely varied, ranging from a magic machine gun, to a throwing spear, to a shrink ray. Half the fun in Musashi consists of absorbing as many different enemies as you can, if only to experiment with their abilities.

And as if the inclusion of Mega Man-esque ability stealing wasn’t enough to make Musashi stand on its own, the game also has several old-school action sequences in the game that usually involve a high-speed getaway of some sort. In the first twenty minutes of the game, you’ll run down the side of a castle in an effort to escape a rolling stone head (pictured above). Later, you’ll have to manuever a log down a raft at high speeds, avoiding obstacles and collecting coins. What’s remarkable about Musashi is that, like a game such as Beyond Good and Evil, it effortlessly manages to blend several different genres of video gaming into one cohesive experience. 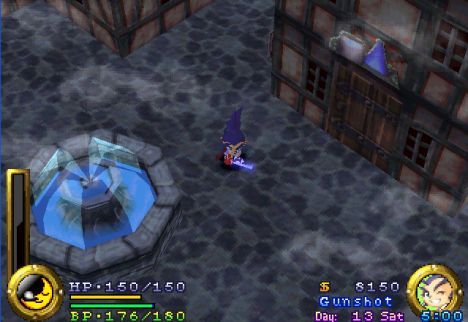 Why You Probably Haven’t Played it:

As said earlier, there’s a decent chance that you have, in fact, played Brave Fencer Musashi — as the aptly named MusashiX2 just pointed out to me, BFM came with a demo for a much-anticipated, much higher-profile title (in this case FFVIII), thus making it the Crackdown of 1998. Except good. Not to mention it was developed by Square, which always meant “quality” on the PSOne, and it’s an action RPG starring a character with bright purple hair, which always means “quality” no matter what system you’re talking about.

That said, however, I personally know several PSOne owners who passed on this title simply because the Japanese-ness of the title distanced them (“Blah blah blah I don’t know who Musashi is blah blah blah reading subtitles in foreign films makes my eyes hurt blah blah blah if my parents knew what they were creating I would have been third-trimester aborted blah blah blah”), or the game’s cartoonish graphics made the game appear either shallow or easy, when Musashi is most assuredly neither of those things.

But, for those people, now is the time to redeem yourself. Now is the time to experience the beauty of this mildly dated multi-genre PSOne game. It goes for about 20 bucks on eBay (a bit expensive, compared to other forgotten games), but the experience is more than worth it.