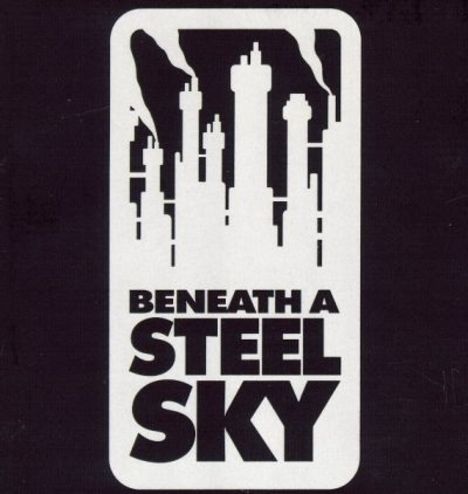 Another week, another forgotten game. This week’s entry is a cyberpunk point-and-click adventure that goes by the unfortunate acronym of “BASS”: Beneath a Steel Sky.

In 1994, Virgin Interactive attempted to combine dystopian literature, cartoonish humor, Dave Gibbon illustrations and a future noir aesthetic into one big point-and-click quest for truth and justice in a world gone mad. A cyberpunk feast of humor and philsophy.

But did they succeed? Is it any good?

Sort of. Yes. Pretty much.

Hit the jump to see what I mean. 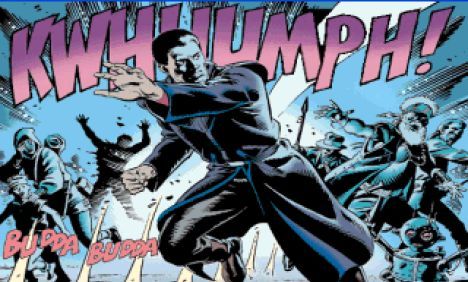 The game takes place in the most dystopian of futures: combine 1984 and Blade Runner then set them in Australia, and you’ve got the general idea. Industrial pollution has turned the sky a weird orange color, the government is run by all-powerful bureaucrats, and the proletariat is watched like a hawk by the police.

The protagonist, Robert, survives a helicopter crash in the wastelands as a youngster. The crash (predictably) gives him an awful case of amnesia, to the point where he cannot remember anything about his life before his crash, or even his last name. A tribe of wise villagers raise him as one of their own, until the military police from his city of birth track him down, murder all the villagers (including Robert’s plucky robot sidekick, Joey), and take Robert back to his original place of birth.

Yet Robert is forced to survive another helicopter crash, when the cop’s hovercar malfunctions and nosedives once they reach the city: Robert manages to escape the wreck unharmed, but is forced to hide amongst the city’s denizens, while simultaneously trying to find his relatives and/or identity.

The game draws heavily on cyberpunk themes: evil corporations, outsider heroes, environmental decay, and so on. Aesthetically, the game hinges on the art of Dave Gibbons, a comic book artist who, in addition to illustrating the greatest graphic novel ever made, also found time to design the prologue and backgrounds for BASS. 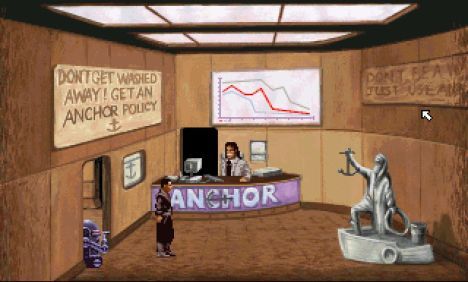 Before tackling the actual gameplay mechanics, it’s important to discuss the game’s tone. Though the environments are almost directly copied from Blade Runner and the costumes/cyberworld are pure Gibson, the game still injects itself with a hearty dose of humor.

This is not necessarily a good thing.

As mentioned earlier, Robert’s robot pal Joey gets killed in the raid on his village, but Robert walks around with his circuit board for much of the game. When Robert finds a welding body to house Joey’s mind, Joey boots up and screams, “EXTERMINATE! EXTERMINATE!” in reference to the TV show Doctor Who. Now, is this funny? Yes. Is it a cute method of subtly breaking the fourth wall? Yes. Does it belong in a serious neo-noir adventure? Debatable.

BASS tells a very serious story of oppression and enslavement, yet almost constantly maintains a light, humorous tone. The puzzles remain logical and straight faced (for the most part), but the characters and situations Robert is put into often feel far too lighthearted given the storyline.

But once you get past that, the game is hugely enjoyable: the dialogue is very good, Gibbons’ art is frequently spectacular, and the cyberworld puzzles (where the player literally enters cyberspace, Tron-style) alone make the game worth the price of admission. While the tone is never quite correct and the story frequently becomes convoluted, the art, the puzzles, and the detailed backstory of the gameworld set BASS apart from your typical adventure title. 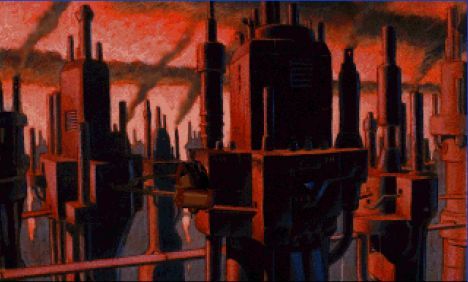 If you were a big adventure gamer in the mid-90’s, you probably have — but those gamers seem to be in shorter and shorter supply these days. But life was pretty damn hard for BASS from the get-go: not only was LucasArts more or less dominating the adventure game market at the time (the far superior Sam and Max Hit the Road was  released less than a year before), but Virgin Interactive had not yet proved itself a reliable adventure gaming company: given that Virgin’s only major adventure game prior to BASS was Lure of the Temptress (if you remember that, great; if you don’t, you see my point), gamers weren’t in much of a position to stand up and take notice whenever Virgin released a brand-new adventure title.

Furthermore, the game’s distinctly cyberpunk flavor seemed somewhat antiquated in the mid-90’s: the overwhelming majority of cyberpunk literature was written in the mid-to-late 80’s, and BASS‘s return to that era seemed to simultaneously be too soon and too late: cyberpunk wasn’t new enough to be relevant, yet not old enough to be retro.

The game garnered a great deal of critical acclaim at the time of its release (it won a UK Golden Joystick award for “best adventure game”), but it somehow didn’t have the staying power that games like Sam and Max had, or that Broken Sword was about to have a few years later.

Good luck, though: you don’t have to stress yourself deciding over whether or not to get it. In 2003, the game was declared freeware, and is now available to download, in its entirety, on the ScummVM site. You’ll also have to download ScummVM, but it’s incredibly easy to use.