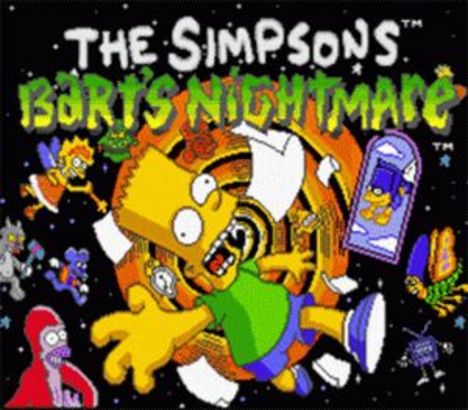 If you’re not a fan of The Simpsons, you’re probably (A) a humorless, heartless individual or (B) too young to remember the days when the show was truly great. The Simpsons remains the longest-running animated show of all time, and one of the most widely-appreciated (pre-2000, anyway). And what better way to commemorate The Simpsons‘ former greatness than by dedicating a forgotten game article to them? There is no better way, friends. There is no better way.

This week’s forgotten game is Bart’s Nightmare, released for the Genesis and Super Nintendo way back in the forgotten era known as 1992. The game revolved around a collection of weird minigames wherein Bart Simpson took on the persona of one of his personal heroes, ranging from Bartman, to Godzilla, to a tiny, pump-wielding amoeba.

The game was about as weird as it sounds, and just as fun — hit the jump to get the lowdown. 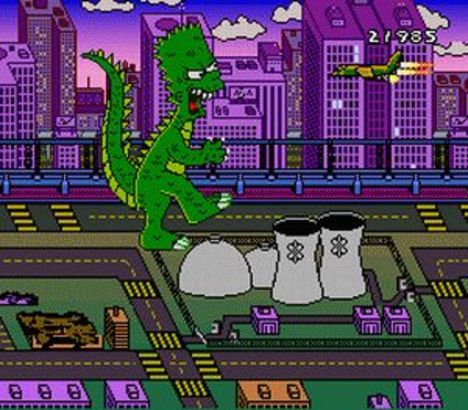 The night before a major paper is due, Bart Simpson decides to finally buckle down, get some paper together, and start writing.

He almost immediately falls asleep at his desk.

Bart begins to dream about his paper, in addition to pretty much everything else in his life. By unlocking doors in his mind and completing the challenges that await him, Bart will (I guess subconsciously) write progressively more pages of his report as he sleeps. At the end of every game, Bart will wake up in front of the pages he has sleep-written, and will have to submit them to Mrs. Krabappel.

Basically, the story makes no sense, and it’s just an excuse to have some cool, dream-themed minigames.

The game is essentially broken up into two main portions: the overworld (referred to as Windy World in the not-at-all-helpful instruction manual), and the world of the dream minigames. First, let’s talk about the overworld.

The above screenshot is taken from Windy World. You can move in any direction, and the screen will sidescroll infinitely. There are some enemies in the Windy World, including Bart’s Grandma (whose kisses can turn you into a frog), Fairy Lisa, and The Decapitated Head of Teddy Roosevelt. You can also pick up some weapons, such as watermelon seeds (you spit them), a skateboard, and bubble gum. 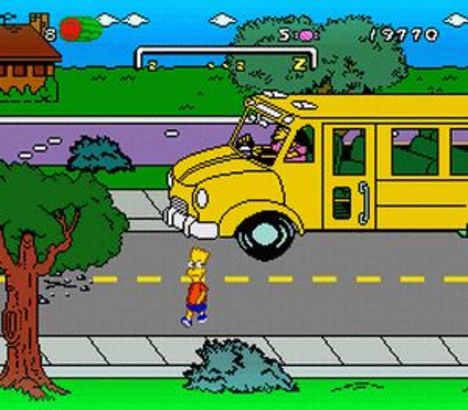 Which leads me to the health system: Bart’s Nightmare has, without a doubt, the single strangest health system I have ever encountered in my 19 years of gaming. Look at the above screenshot. You see that upside-down bracket thing, with the differently-shaped Z’s inside of it? That’s your health bar. Every time you get hit, you lose a Z, and if you lose all your Z’s then the game is over. Sounds pretty standard, right?

Wrong. The only way to replenish your Z’s in that life bar is by — and I am not making this up — chewing bubble gum, taking control of the bubble after it leaves your lips, and using said bubble to fly around and bump into little, blue, lower-case Z’s that haphazardly float around the level.

Basically, you chew a bubble with Y (on the SNES, anyway — the Genesis probably had you press a Q button or something). After the bubble has been formed, you hold Y and use the control pad to steer it around. When you find a blue Z, you have to steer the bubble into it, at which point the Z shoots upward and hopefully lands in your bracket. I say “hopefully” because if your bubble touches a Z that has moved beyond the left or right boundary of that health bar bracket, then the Z will move up, miss the bracket entirely, and pointlessly fly into oblivion.

If all of that was confusing, I apologize. The health system almost too weird to put into words.

But putting aside the Windy World, it’s time to mention the best (and bulkiest) part of Bart’s Nightmare: the minigames. To access a minigame, you have to wander around the Windy World until you find a loose sheet of your report blowing around on the sidewalk. After finding it, you have to jump into it, at which point you are allowed to choose which minigame you want to play. The minigames are as follows: 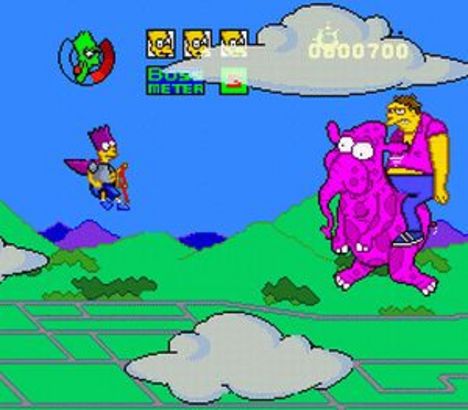 Bartman — In this side-scrolling shootemup, you fly through the air as Bartman, armed only with your slingshot. You’ll blow up nuclear missiles from the Springfield power plant, you’ll fight Barney Gumble on a pink elephant (pictured), you’ll get health snacks from a magic-carpet-riding Apu, and you’ll eventually face off against Mr. Burns, who rides a 1920’s-style biplane.

Indiana Bart — Stuck in the Temple of Maggie, Indiana Bart must jump across a series of stones and reach the end of the level, whilst whipping demons and collecting eggs. This level is absurdly hard, if only because you can only traverse the level by jumping across different pillars. After jumping on a pillar once, it would sink down a few inches, and every time you jumped on that pillar it would sink further and further, eventually plummeting you to your doom. And all of the pillars started at different heights, so there was more or less no way to know whether or not the pillar you were about to jump on would end up killing you. I have never beaten this minigame, even once.

Bartzilla — The Bartzilla level has two parts: in the first part (pictured), you stomp through Springfield and destroy buildings at your leisure. The first part is nearly impossible to lose, and it’s a lot of destructive fun. The second part, after Professor Frink reduces you to the size of an average human, requires you to climb up the Empire State Building, avoid the falling debris chucked out of the windows, and eventually defeat Homer Kong at the very top of the skyscraper.

Itchy and Scratchy and Bart — In a Final Fight-esque side scrolling brawl (only much harder, with instant deaths), Bart has to run from room to room in the Simpson house and fight both Itchy and Scratchy by turning their own weapons against them.

Bart’s Bloodstream —  Bart becomes an amoeba in his own bloodstream, and must kill the viruses in his body. He does this by sticking the individual virus cells with an air pump and inflating them until they burst. This minigame was weird way back then, and it’s still weird now. 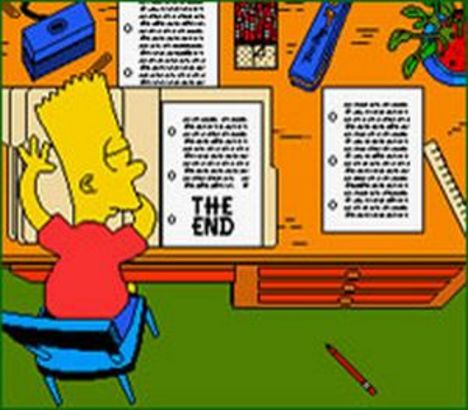 I don’t know, have you? For kids born around 1988 like myself, The Simpsons was the coolest thing around in 1992 — South Park hadn’t been created yet, so we needed to attach ourselves to animated show that had the childish laughs we so frequently desired, but also included small spurts of raunchy humor that our parents could get angry about. The Simpsons was that show.

And the SNES was the system, of course. I’m sure many of my friends had Sega Genesises (Geneses?) but Bart’s Nightmare came out during the height of the Sega vs Nintendo war, and I was a Nintendo soldier to the very last. A video game that combined my favorite Simpsons character, available for my favorite video game system? I was there.

Therefore, I have to assume that at least some of you were as well, unless I’m far too old or far too young to be talking about such things. Bart’s Nightmare was actually one of the first SNES games I ever bought with my own money. If you haven’t played it, though, I can understand; it’s a licensed game, it’s more or less identical in structure to the slightly-superior Virtual Bart, and it’s a Super Nintendo game. If you didn’t play it back then, I can’t imagine you have much reason to play it now.

But I would, of course, recommend it. SNES games are easier to pirate than pretty much any other system I can think of, and the game is definitely worth your time, if only for some harmless time-wasting. In my humble opinion, the Godzilla level alone makes it worth the download.

I’d also like to point that I have absolutely no idea how the game ends, because I could never beat a single level of Indiana Bart. Just throwing that out there, in case anyone who actually bothered to beat it can fill me in.