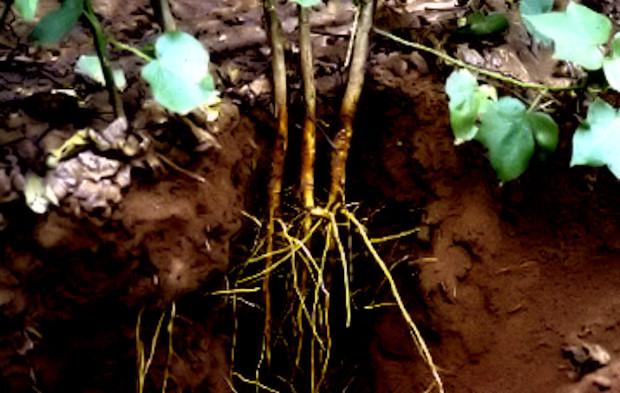 In vascular plants, the root is the organ of a plant that typically lies below the surface of the soil. This is not always the case, however, since a root can also be aerial (growing above the ground) or aerating (growing up above the ground or especially above water). Furthermore, a stem normally occurring below ground is not exceptional either (see rhizome).

So, it is better to define root as a part of a plant body that bears no leaves, and therefore also lacks nodes. There are also important internal structural differences between stems and roots. The first root that comes from a plant is called the radicle.

The two major functions of roots are 1) absorption of water and inorganic nutrients and 2) anchoring of the plant body to the ground. In response to the concentration of nutrients, roots also synthesise cytokinin, which acts as a signal as to how fast the shoots can grow. Roots often function in storage of food and nutrients. The roots of most vascular plant species enter into symbiosis with certain fungi to form mycorrhizas, and a large range of other organisms including bacteria also closely associate with roots.

Bennett: I haven’t gotten a lot of gaming in these past few weeks, but I did enjoy a few hours of Plants vs. Zombies. I’m also messing around with a PC game called Brass Restoration, which was originally released in Japanese and translated by fans. I have a feeling I’m going to end up having sex with my female classmate in the game if I keep clicking the right answers. Persona trained me well!

Zimmerman: Lots and lots of Borderlands this week. I also played my usual dose of Rock Band 2 and spent a little time with The Ballad of Gay Tony, which I should have a review of early this week.

Devore: I foolishly couldn’t help myself. I got to level 50 in Borderlands even though I’m probably going to be screwed when the DLC hits. If it’s anything like the add-on stuff for Fallout 3, much of the enjoyment will be from having a new way to get experience rather than the story itself — I pray this isn’t the case for Borderlands.

I also got Prince of Persia for $10, which makes me glad I didn’t buy it at launch. Even though I tend to love collectathons, this game is too ridiculous even for my standards. It wouldn’t be such a pain if the game was more interactive than a DVD menu in terms of platforming, but that really isn’t the case. At least it’s pretty, and the boss fights are sort of fun.

Chester: It’s been a weird few weeks of gaming leading up to the holidays, especially with me playing stuff not for review, but for Spike VGA judging and what not. So I’ll just list off things I’ve spent some time with this week, with little to no commentary, since I’m losing track of what I can and can’t talk about: Need for Speed: Nitro (Wii); Borderlands (360) with the wife; Dragon Age (PC); LEGO Rock Band (360); DJ Hero (360); Tekken 6 (360); God of War III demo (PS3 OMG); Ratchet & Clank: A Crack in Time (PS3); and probably some other stuff I’m forgetting/really can’t mention.

I’ll just get next week out of the way: God of War Collection. That is what I intend on playing all week if all goes as planned. It’s hilarious — I was giving people crap about getting excited about the Marvel vs. Capcom 2 re-release on PSN/XBLA, and here I am freaking out about God of War remasters. Hey, I can admit when I was wrong. Re-releases FTW!
Sterling: Been playing Dragon Age: Origins mostly, which I cannot talk about, but. We’ll have a review of that on Tuesday, so please tune in to Destructoid for it. I’ve also been playing DJ Hero, which is surprisingly decent, but the music is dogshit, which lets it down. I’ve never understood how people who ruin the hard work of others can be considered musicians in their own right. Also, Borderlands (Hunter class), a game that started off slow and poor, but has turned into a very fine role-playing shooter; Abe’s Oddysee, which brings back memories; and Rock Band Unplugged, which I play way too much.
PerLee: I’ve been rocking the berzerker in Borderlands, and I must say, running around and punching skags with explosive fists never gets old. Ever. It’s stunning good fun.
Also, I’ve been breaking in my DSi to compensate for my stolen Lite with my first playthrough of Chrono Trigger. It’s really a lot of fun, and while I dislike the art direction for the characters, scenes like the trial really blew my mind. Very cool.

And after ten years, I’m playing Pokemon again, starting with Diamond. I have one thing to say: this game is sooooooo slow. I’m not really enjoying it anymore, and something just feels off about the whole
experience. I wonder what’s happened to this franchise?

Aziz: I’ve finally played Halo 3: ODST Firefight with other people! So good to be playing games online again. Hit me up on Live (Gamertag: Hamsatoid) if anyone needs a Firefight partner.
Concelmo: After beating Brutal Legend I have been playing almost nothing but Ratchet & Clank: A Crack in Time. Me God, the game is so good. Seriously. I love it so much. It’s one of my favorite games of the year. Clank’s time puzzle levels are so amazing.

Once I finish Ratchet & Clank (should be this weekend!) I am popping in the awesome Metroid Prime Trilogy again to hold me over until Modern Warfare 2 (OMG!) and New Super Mario Bros. Wii (ZOMG!).

Ross: Just about to hit 50 with my Hunter in Borderlands, and I’m only about halfway through Playthrough 2. Still trying to find a sniper rifle I’m really happy with.

Got in some of the Left 4 Dead 2 demo as well (AMAZING!), a whole bunch of Torchlight, and a touch of Tekken 6 (which has absolutely terrible netcode).

Burch: You know what I just realized?

So, the L4D 1 survivors may be carriers. Well, we can’t really know that for sure unless we know how other, noninfected humans react when in their presence, right? Except, we do know — that one guy who rings the church bell in Death Toll is perfectly healthy by the time Bill, Zoey, Francis and Louis meet him, but by the end of the zombie rush he summons, what happens?

He gets turned into a zombie. The guy had been around the infected all the goddamn time before, but it wasn’t until a bunch of uninfected jackasses showed up that he actually succumbed to the virus.

Why did the Crash Course helicopter crash? CAUSE THE GUY TURNED INFECTED IN THE MIDDLE OF THE FLIGHT.

Burch: AHHHHHHHHHHHHHHHHHHHHHHHH
Sarkar: I haven’t really been playing games much, as this past week and this coming week was/will be very busy for me with midterms and whatnot. I’ve mostly been playing games of my NHL 10 Be A Pro mode here and there, where I can squeeze one in. Of course, three nights during which I might’ve played some games (Wed/Thurs/Sat) were reserved for Games 1-3 of the Phillies-Yankees World Series. Game 4 is tonight in Philadelphia — GO YANKEES!
Holmes: Didn’t get to play videogames as much as I wanted this week; had a lot of long Halloween posts to write. I did pick up a $15, 2D shmup on the Wii called Saint. It’s the second 2D shmup based on the story of Goku the monkey king to show up on the Wii thus far, which I think is pretty weird. The game isn’t too bad, though; it reminds me of less well designed, side-scrolling Gunbird 2 with bigger art and more weirdness. The second level takes Goku to outer space where he takes down a giant space cruiser, flying horses, and bearded Buddhas on lotus blossoms.

Also played some Animal Crossing: City Folk for that post I did about it being the best zombies game ever.

North: On the road with my PSP again. I beat Umjammer Lammy for the Um-teenth time. Also playing Armored Core 3 portable for review.
Razak: Just finished up LostWinds 2 for review, and I’m literally tearing through A Boy and His Blob. It’s quite a bit of fun, if a little hit and miss. Also RE5 with my brosef. Something tells me I should get on this whole Borderlands thing.