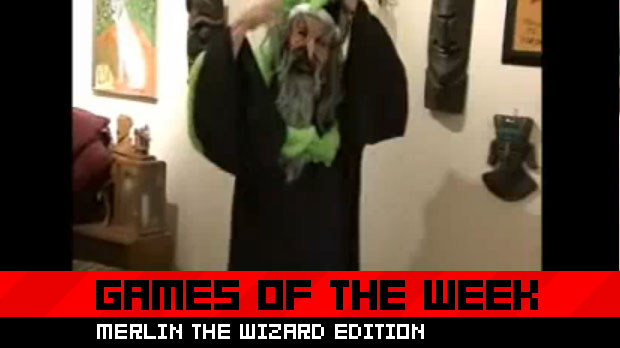 This guy is possibly the greatest thing to have ever happened to Youtube. His name is Ricky Tic, he walks around with the URL of his Youtube channel on his clothes, and he thinks he’s brilliant. Check out his work, which ranges from brilliant recreations of Merlin’s life, to amazing Batman comedies. He’s a genius.

Speaking of URLs printed on clothing, we played videogames this week. You really should hit the jump to find out what the staff’s been up to. Do it!

Gutierrez: ODST for me! Really digging the atmosphere of the game, and Firefight is addicting and fun! Nice opening act until Modern Warfare 2!

Sterling: In before Samit says addicting isn’t a proper word.

Personally, it’s been a portable week, split evenly between Scribblenauts and Mario & Luigi: Bowser’s Inside Story. Scribblenauts, as most of you know by now, is fun and brilliant, but let down by dodgy controls and frustrating design. Bowser’s Inside Story, however, is consistently fun, funny, and charming as fuck. Definitely a brilliant game that was sadly overshadowed by Scribblenauts. You don’t often get to say that about a game starring Mario.

North: I could brag that I played Modern Warfare 2 this week, but I think I already covered the braggery in my preview. On the airplane that I’m always on, I played a fair bit of Disgaea 2 for the PSP this week. Love that game. I also just started Kenka Bancho: Badass Rumble for the PSP. What a silly/fun game. This weekend I’m trying to squeeze in a bit more Demon’s Souls and Phantom Brave before I head off to TGS.

Razak: I’ve been progressively more and more disappointed with Scribblenauts all week, but I keep coming back to it because of the simple fact that you can undisappoint yourself simply by solving a puzzle in a cool way. Still think I should of gone with Mario and Luigi instead. Otherwise it’s been quiet on most fronts gaming wise in mi cassa.

Leray: Scribblenauts, Dragon Quest VIII, and Prince of Persia for me. I’ve also been playing this game where I try to find ways to make my new landlord provide me with a decent internet connection. Not having my 360 online hasn’t been much a problem in the few weeks I’ve been living in the new place, but I have to get that sorted out before Borderlands comes out.

Aziz: I’ve been playing the crap out of Mario & Luigi: Bowser’s Inside Story. It’s a wonderful game and the Bowser segments are easily the best part of the game.

Bottom line: I’m playing too many games at once, and that never ends well.

Grim: Who hasn’t been disappointed with Scribblenauts at one time or another? I have yet to meet that person. I’ve also been playing more Arkham Asylum and somehow managed to beat those ridiculously hard combat challenges, plus Shadow Complex here and there to hit level 50.

Cantler: I finally dug into some Demon’s Souls for a while yesterday. Not really my cup of tea and I doubt I’ll buy it and finish it, but at the same time I completely understand why Adam Dork loves it so much. It’s a challenge that’s hugely satisfying in ways that are hard for me to explain. Also played ten shitloads of DiRT 2 for my review, which is probably up by the time you read this. If you’re a rally fan, buy this game immediately.

Sarkar: I hopped back into Ravenholm in Half-Life 2 for the first time in more than a year, thanks to Rebel FM’s Game Club podcast on the game (they’re going to do episodes 1 and 2 as well). It still scares the crap out of me, but thanks to Father Grigori, I’m now making my way through the mines. The game’s great and all, but after becoming so accustomed to the L1 lock-on/zoom that’s a staple of games like CoD 4 and, well, most other shooters, I find myself really missing it here. I guess it’s just further proof that Valve makes PC games first and foremost.

I’ve also been spending a lot of time with NHL 10, as you might expect. After playing for a while on the “Normal” game style, I’ve turned it up to “Hardcore” — the game speed is just too high on Normal, and fatigue recovery is too quick. I’m still getting used to the no-assist, fully manual passing, but I’m already doing much better than before — I’ve scored seven goals in my two games, whereas I’d only put up a single assist in the three games prior to that.

Finally, I played through the Brütal Legend demo … again. I say “again” because it’s the same slice of the game that I played at E3, but it’s no less awesome the second time through, especially with the great intro movie to kickstart my heart (see what I did there?). DECAPITATIOOOOOOOOON!

Bennett: A little bit of Muramasa here and there, some Pixeljunk Monsters, and that’s about it.

Ross: Just picked up Arkham Asylum for the PC (WOO CAPE PHYSICS!), and that’s been awesome. Also been playing some Picross again, as well as Scribblenauts. I also just bought Bowser’s Inside Story, but haven’t had a chance to play it yet.

Concelmo: I finished up Batman: Arkham Asylum and am still blown away by how good the game is. Seriously, it is fan-freakin’-tastic. I can’t believe it turned out so great! Also played through Muramasa, and — while the gameplay is a little repetitive — the levels are so beautiful that I had no problem running through them over and over … and over again.

The highlight of my gaming week, though, has to be Mario & Luigi: Bowser’s Inside Story. I am huge fan of the series and this third game does not disappoint. I am loving every minute of it!

Holmes: Been really busy with various art projects this week. Also, I’m sort-of Jewish now. Weird, right? Had to learn some Hebrew for Rosh Hashanah songs, which also took a fair amount of time. Tough language. Someone should make Hebrew of the Dead . They’d make a fortune.

I still found the time to squeak in some Contra: ReBirth, Muramasa, Game Center CX 2, the Bonk remake on the Gamecube, and Animal Crossing:City Folk. Each game can be enjoyed for fifteen minutes, then put down, which is pretty much the only way I can game at the moment. That’s why I probably wont get Scribblenauts or Mario and Luigi 3 until Christmas (or Chanukah, or whatever), . I just don’t have the time for either game right. now. Sort of a bummer, but I’m sure they’ll both be worth the wait.

Cantler: If Hebrew of the Dead existed, it would have been on my list this week.

Aziz: Followed by the epic sequel called Jihad of the Dead. Every time you type out the phrase Allah Akbar, you blow up.

… By the way, Happy Eid to all of you Muslim readers.