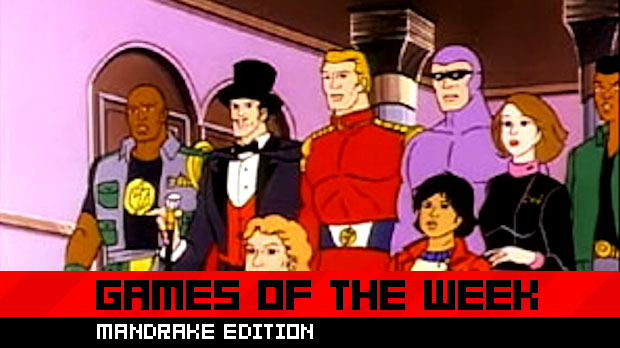 After much deliberation, I have decided that Defenders of the Earth had the best opening of any eighties/nineties cartoon show. Sure, Skeleton Warriors was absolutely brilliant for its ludicrous metal, and M.A.S.K had a certain camp charm. However, nothing is quite as hilarious Defenders of the Earth, especially the bit where they sing about Mandrake. Pure quality.

Speaking of Mandrake, some videogames were played. Feel free to hit the jump and see what’s been tickling our fancy this week.

Concelmo: Finished up the classic Final Fantasy VII on PSN, winding down the incredible Dragon Quest V: Hand of the Heavenly Bride, and falling madly in love with Little King’s Story for the Wii.

Also, crying that I had to miss Comic-Con this year. I would have killed a man to be in that Avatar panel. 🙁

Razak: I must get Little Kings Story, Chad, but there’s so much else to do! I tossed in some multiplayer Conduit and Roogoo this week when some friends came over and we gamed old school (splitscreen!). It was fun. Otherwise I’m nearly done with Flower, Sun and Rain which I just can’t get a grasp on. Everytime I think Suda51 is making a point or has an actual message the game just gets too far out there. Need to get to the end when everythign will be explained… I hope.

Niero: Earlier today I was in the mood to play Lost Planet but when I opened the cd case it was empty.  I just stood there for five minutes then kicked a puppy.

Bennett: I’ve played a solid dose of Avoid the Con Aids this week. I also salivated on Alan Wake but didn’t actually play it myself (but God, did I want to).

Villasenor: I played a lot more Mount and Blade — using the Prophesy of Pendor mod — and Audiosurf this week.

Zimmerman: I’ve been playing quite a few different titles. Chronicles of Riddick: Escape from Butcher Bay is pretty satisfying, though I think it’ll take me some time to complete as I can’t seem to spend more than half an hour on it at a time. Picked up Shatter on PSN and it’s really addictive, but I haven’t yet figured out how to maximize my scores and it’s a little frustrating. ‘Splosion Man is hella fun, particularly in co-op and totally worth investing some MS points in.

Finally, I’ve been chillin’ with my homeboy Lloyd Banks, trying to get my jewel-encrusted skull back from a punk-ass bitch. One of the most memorable moments of gaming this year came from me watching Banks take an RPG to the face and proclaim, “Aw, s–t! I’m dead!” Amazing.

Cantler: I’ve done nothing for the past few days but play KOF XII for review, and also for fun, because that’s what it is — fun. Check out my review and see if it’s up your alley. Before that started, I played a lot of Espgaluda on PS2 because it’s a great Cave shooter and I’m suffering from serious Death Smiles withdrawal. I guess that makes Espgaluda kind of like a blow-up doll, which is an analogy I wish I hadn’t thought of just now.

Aside from that, it’s been Radirgy and Gunbird 2 on Dreamcast, Super Puzzle Fighter on 360, and the Japanese Katamari Forever demo on the PSTriplez.

Fronz: D-D-D-D-D-DotA. I even watched a few professional players’ in-game replay videos this week, too. Some of the Asain pro championship matches that have been going on lately are crazy entertaining. I’d pay monthly fees if this shit was televised. I might start covering some of the DotA events on Dtoid since no other big blogs out there are giving them much attention. I wish more of you would give this game a try 🙂

Holmes: Hey JRo, do you like the music in Mount and Blade? My good friend was the composer on that game, and I want to give him attention.

Played Little King’s Story for review and loved it, playing KoF XII and have extremely mixed feelings about it, caught a Hercules beetle in Animal Crossing: City Folk and did a fist pump, and just got and import copy of Retro Game Challenge 2 in the mail.  I haven’t beaten yet, but so far it’s perfect, better than the first game in every way, while retaining all of the retro charm. If I can just get through the text-adventure game challenges, I’ll give you an import review.

Oh, and Matt, where did you get Flower, Sun, and Rain? I’ve been looking for it everywhere but it’s always out of stock.

Ross: I’ll go back and have a listen. I only played it once or twice and didn’t really enjoy it that much, but I know a ton of people are really into it.

Haven’t gotten to play much stuff this week since I’ve been busy with work stuff, so I will talk about what I played at Comic-Con.

OMFG the Miles Edgeworth game is AMAZING. It kills me that it will not be out until February. I also played some of The Saboteur, which seems like it has a lot of promise and will be really neat, Dante’s Inferno, which is a very pretty looking game and a decent amount of fun, although it’s very heavy on QTE things and I do not like those. I watched people play Brutal Legend and it looks really neat too. Bayonetta is quite a bit of fun as well — it’s pretty in your face about being exactly what it is, so no huge surprises there. Also I played a little Dissidia and it was really fun, but also very easy. I was slapping the computer around like a bitch. I still need to get a PSP eventually, maybe I’ll finally get one for this game…

Grim: I made it down to the Phazon Mines in Metroid Prime, which is unfortunately my least favorite of all the areas in the game. In Paper Mario: TTYD, I just started fighting in the Glitzville tournament — the game has been able to keep my interest like most RPGs are unable to. And speaking of DoTA, I did try out League of Legends and was called a retard my first match. I’m so glad this game’s community is forgiving. Fun times.

Razak: It was mailed to me, John, and arrived on my doorstep. I haven’t seen it in stores either. I’d say it’s worth your time if you like Suda a lot like I do, but otherwise not.

Sarkar: I’m still playing The Bigs 2 for review, which is still tons of fun (though some minor annoyances are starting to rear their heads). On Monday, I went to MTV headquarters in Times Square and played a near-final version of The Beatles: Rock Band, which was so glorious that I wanted to chloroform everyone else in the room so I could run away with the debug Xbox 360 and game. Seriously, it’s amazing — and apparently, it’s the Brian’s Song of videogames. You can read about the Vocal Trainer mode here, if you’re so inclined. More impressions are coming on August 14th!

I made my way out to Times Square on Thursday as well, but instead of going inside a building, I hung out at Nintendo’s Wii Sports Resort launch event, which was surprisingly not lame! And I really enjoyed the time I spent with the game itself (I tried the Archery and Swordplay games). Check out my thoughts on the launch event, as well as my interview with Nintendo of America’s Bill Trinen.

Finally, I went to a friend’s house last night and played the third level of Killzone 2. That game is amazing, but after I had killed all the enemies in the level and crossed a bridge, my own damn tank ran me over. WTF? We also took part in some three-player Worms (PSN) action, which is always exciting. Seriously, that game can strain and even end friendships.

Sterling: Played Red Faction: Guerrilla. I can see how some people like it, but I’ve been rather “mreh” on the whole thing so I don’t think I’ll be playing it very much now. Otherwise, been playing a bit of Metal Gear Solid when I can be bothered. Also, I just download ‘Splosion Man and I love it. I love a game that just decides to fuck all sense and sensibility.