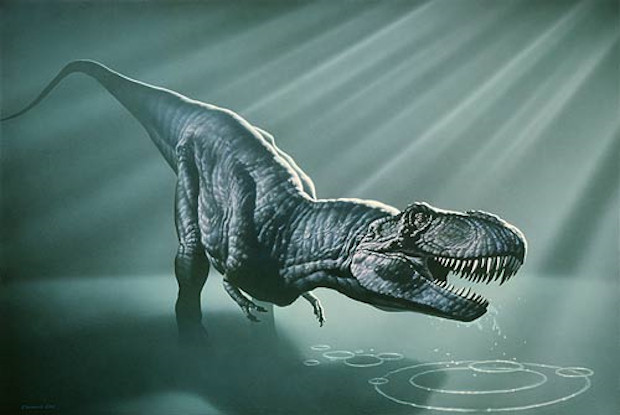 It’s a picture of a tyrannosaurus rex, which is a dinosaur. I literally can’t think of anything else to talk about this week because I’ve got to do this in ten minutes and want to go back to playing videogames, rather than writing about them. Look at the T-Rex. He’s really happy. He’s thinking about meat.

As per usual, videogames happened to the Destructoid editors this week, and you can hit the jump to find out which exact videogames they were. The T-Rex did not play videogames this week. That is because he is a T-Rex, and whoever heard of a T-Rex playing videogames?

North: Sinful RPG-fest here: I’ve got my face in my DS this week, with lots of time going to the boobalicious Super Robot Taisen OG Saga: Endless Frontier and the just plain delicious Devil Survivor. Speaking of devils, I’m also into Devil Summoner 2, and I’m having a devil of a time with Final Fantasy VIII, which I started replaying just recently. Also, Final Fantasy XIII‘s demo has made the rounds a few times.

Bennett: Still working on Class of Heroes and Plants vs Zombies for review, along with Diner Dash for 360, which is much more challenging than I expected it to be. Finally got my hands on Hammerin Hero, which is delightful, and started my replay of Final Fantasy VIII inspired by all the beautiful music I saw played at the Distant Worlds concert. Snuck in a little Rock Band 2 last night as well, which was fun to get back to.

Razak: It’s been all MadWorld all the time for me. I’m enjoying it for the most part, and love the old school arcade feel of collecting high scores. As a challenging game though it isn’t really doing it for me. I don’t think that was the point though. You get the feeling they were going more for a challenge to get really high scores in the levels over a challenge to beat the levels. In that case the game is win.

Sterling: Most of my week has been spent with Dynasty Warriors Strikeforce which I am reviewing. It’s good, but it’s clearly designed for the kind of four-player PSP action that is NOT going to happen in America, and the game makes no allowances for single players. It’s very difficult and my hands have started to ache quite badly from playing the PSP so much.

Also been working on clearing up some games we’ve missed out on reviewing, starting with OutRun Online Arcade. Only trouble is, I suck at driving games and can’t win a single course. That’s going to be an interesting write up. Outside of work-based gaming, I’ve been rocking Killzone 2 as usual, and tried out a some of the new Left 4 Dead modes. Good show!

Concelmo: A lot of Valkyria Chronicles and a lot of Lock’s Quest. Yay!

Holmes: Still haven’t really started in on Valkyria Chronicles. I just get the feeling that once I start, I wont be able to stop.

That wasn’t a problem with Impossible Mission and Legend of Kage 2, both on the DS. They may be $10 games, but that doesn’t mean that have to be boring and predictable. It’s a shame, because they both feature some surprisingly beautiful sprite work. Too bad their game designs stink.

North: I hate when people say “Kage” like “cage.”

Dyson: You’re Thai, quit your bitching. And everyone knows that it’s pronounced ROO.

Leray: How *should* “Kage” be pronounced, then? Kah-gay?

And Ryu is obviously ree-you.