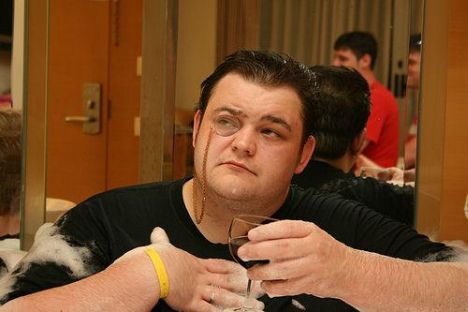 Hello dear readers. As you can tell, I am not Jim Sterling. We, um, don’t know where Jim is at the moment. We haven’t heard from him all day, as he never showed up to the offices and no one seems to know where he’s at. He hasn’t answered his cell phone and his family has no idea what’s up with him either.

Then I noticed that Chad, Colette and Samit didn’t show up to work today either. Chad lives near the offices so I went over to see if Chad was OK. When I knocked on Chad’s house, he came out wearing nothing but a thong and was covered in blood:

Yup, no idea where Jim is at the moment.

Hamza CTZ Aziz: I’ve pretty much been playing nothing really. Some random flash games and GTA IV off and on. I want to play through the story again, but I’ll wait to do that before the DLC for the game comes out. I have been itching for some Halo 3 but it looks like no one is hosting it anymore for FNF.

Dale North: Nothing exciting this week as I’ve been out on vacation. I’m finally getting back to finishing Saturn Bomberman, the best version of the game yet. I’m also not finished with Crisis Core, and that’s mostly because I’m slow. I’m looking forward to jumping back into Shin Megami Tensei: Nocturne, as I restarted it week before last. I forgot how great it was!

Dan Husky Hog Lingen: More like best weekend, seeing as I finally have free time on my hands to play everything that’s been piling up. Of course GTA IV took priority, but after a little bit of that, it was on to Jet Set Radio, and Sonic Adventure, thanks to the Dreamcast Dyson found for me. Other than that I’ve been WoWin it up every once in a while, nothing too heavy, but I must say it’s been quite the weekend of gaming for The Husky Hog.

Dyson: I beat No More Heroes last night. I like the game a whole lot, but I’m kinda pissied that you have to use only one save file a a time. What’s the point of having four save slots if I can’t load any of them, or am I missing something …

/Stumbles towards the instruction booklet.

Chad Concelmo: When you read this, I will have finally beaten Grand Theft Auto IV. Unless I continually fail at the helicopter part of the final mission over and over again. In that case, I will have just quit in frustration. Either way, I miss Brucie already. 🙂

Topher Cantler: I haven’t had time for much of anything this week, but I managed to sneak in a little Lost Odyssey here and there. I’m amazed at how good this game is.

Alan Gameboi Johnson: This week has been a little bit of Burnout Paradise, and LEGO Star Wars The Complete Saga. I also briefly toyed around with GTA IV, but I hope to come back to and finish it up soon.

Nick Chester:  Most of the week I played a bloody game with a ninja in it that I can’t talk about yet. Now I’m done playing it. Review on Tuesday.

Also, Rock Band. But what else is new?

Samit Sarkar:  As I said last week, I now own The Orange Box, and I spent about four hours with Half-Life 2 last Monday. I haven’t gone back since, though, because I’ve been playing through more and more GTA IV (damn you, Derrick McReary’s first mission!). I also downloaded Muse’s “Hysteria” in Rock Band, and just like Nick said, it has a killer bass line. Hell, I almost failed it when I was playing it on Expert. Awesome song, though. God, I love Muse.

Still, because my friends and I are now all home from college for the summer, I’ve been hanging out with them a lot, which has meant that I’ve had less time to play games. We also did an Indiana Jones trilogy marathon in preparation for the solid-but-nothing-special fourth film, which I saw on Thursday. Unfortunately, I won’t be much closer to beating GTA IV by this time next week, since I’m going to be away from home pretty much from Wednesday morning through Sunday night. Oh, well … the Cinci Mega-NARP is going to be worth it!

Not Jim Sterling: I’ve been working very hard this week doing official Destructoid type business things. I got some intimate time with GRiD, and my full “review” will be up on Monday morning. I can’t say much more without Codies getting upset though. I also got to play Warriors Orochi 2 at the London Expo. Big shout out to all the Podcastle fans who recognized me there — it was surreal to be recognized like some sort of dirty celebrity or something.

My travels up and down the country this week saw opportunity for plenty of PSP action. If you haven’t played Astonishia Story yet, do it. That shit is epic. I also played the Haze demo and laughed at how awful the game’s dialog is, and I had a good time with Uncharted: Drake’s Fortune on Wardrox’s PS3. Damn good little game, that.

Colette Bennett: Replaying Penny Arcade Adventures partially for achievements I missed and partially just because I’m not ready for it to be over, a few hours of Fatal Frame 3 late at night to increase my chances of heart failure from fear, and small bursts of Persona 3 until I need a break from endless dungeon levels.

So, dear readers, what have you been playing? HUH?! WELL?! TELL US, DAMN IT!