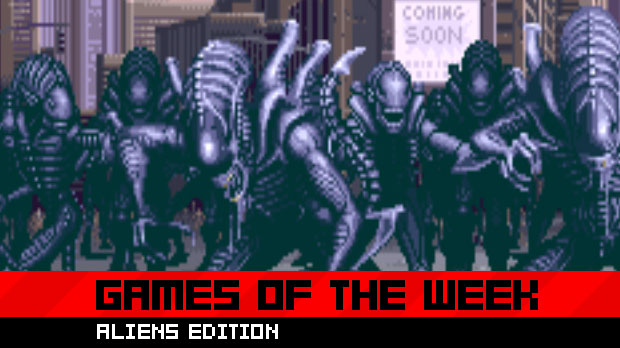 Every now and then I get into a right proper mood where all I can think about is Aliens-related stuff. I shall probably write another Aliens game feature this week, which I’m sure three of you are looking forward to. That’s three of you including me. Anyway, I have ordered that rubbish-yet-awesome Alien Trilogy PSX game off eBay tonight and I am really looking forward to getting it, because Aliens stuff is good n’ that.

Aziz: I turned on my Xbox 360 for the first time in two months to download the Resident Evil 5 versus mode and then I turned it off. I have no time to play at home anymore.

I did play some more Dante’s Inferno this past week as well as the Red Faction: Guerrilla multiplayer. Shit is tight, son.

Razak: Wolverine. It’s a blast though I wish there were some better bosses. They kind of get repetitive.

Sterling: More Killzone 2 as usual. Also spiced this weekend up with the Capcom arcade version of Alien vs. Predator, and since Adam Dork reminded me of Gods, I downloaded that and had a crack at it. I remember it being a lot easier when I was six years old.

Sarkar: My brother came home from college this week, so I finally had a sentient opponent to throw Hadoukens at in the Marvel vs. Capcom 2 demo! Of course, he was able to beat me — twice — by mashing buttons, so I decided that we’d switch to Super Street Fighter II Turbo HD Remix. I proceeded to summarily whip his ass. Then we played a couple of games of 3 on 3 NHL Arcade, which was fun, as always.

As for solo gaming, I got back into Road to the Show in MLB 09. Samit Sarkar finished his second season in the minors, and got invited to spring training with the Yankees! I made the team as a middle relief pitcher, and after a month or so, I became the fifth starter! Hooray!

I also popped the NHL 09 disc into my PS3 for the first time since the end of January, and I finished off Samit Sarkar’s rookie season by winning Lord Stanley’s Cup with the New York Rangers! I defeated the Vancouver Canucks, four games to one. Sarkar finished with 35 points in 19 playoff games, but it was goalie Henrik Lundqvist who won the Conn Smythe Trophy (playoff MVP), going 16-3 with four shutouts and a 1.69 goals against average. After such an awesome regular season (99 points in only 54 NHL games) and playoffs, Sarkar signed a three-year deal ($2.2 million per year) with the Rangers.

Finally, I tried out the demos of UFC 2009 Undisputed and Fight Night Round 4. The controls in UFC are a bit overwhelming — they seem simple, but you can do a lot with them (as was evinced by the thorough tutorial). But I had fun, and if I had any interest in MMA at all, I could see myself liking the game. FNR4 was just plain awesome. I literally spent two hours playing the demo — I just kept switching back and forth between playing a few matches as Manny Pacquiao and Ricky Hatton. In all that time, I didn’t lose once (I did have two draws), though that’s probably due to the fights being limited to three rounds in the demo.

Holmes: Got MadWorld and Dead Rising Wii back from a friend after lending them out about a month ago. Playing them again reaffirmed my opinion of both games (neither are perfect, but both give you a kind of fun you can’t get anywhere else.)

Said friend wanted to borrow more games, so we dug through my catalog of Wii titles to see what would suit him. We test-drove Rune Factory: Frontier, Mushroom Men: The Spore Wars, Tatsunoko Vs Capcom, Ultimate Shooting Collection, Donkey Kong Jungle Beat Wii, Excitebots, and Elebits. He decided on Donkey Kong, Mushroom Men, and Rune Factory.  He wanted Excitebots as well, but as it turns out, I’m now on the job to review the game, so I had to hold onto it.

Then we played some Mario Kart Wii and Brawl. Brawl is even more fun than I remembered, but a lot of that had to do with the fact that we were playing on Saturday night.

Adding K.K. Slider makes everything better than you remembered.

Devore: I finally beat Condemned 2, and I’m not entirely sure what to think. It’s definitely worse than the first game, but I do like that the forensic stuff was expanded upon and how even though the story is completely absurd, it at least makes some sense now. Oddly enough I would still recommend it if only for the bear level and the hobo fight club mode.

Bennett: I’m still spending leisure time in my zen garden as I replay adventure mode in Plants Vs. Zombies, and I fiddled around with Gardening Mama a little bit but found myself tired of the formula more or less before I even got started. I think I’m going to save myself for Science Papa and see if I like that any better. The weekend brought about my determination to finish Persona 4 once and for all before my copy of Devil Summoner 2 arrived. Although I didn’t make the goal (Devil Summoner 2 arrived today), I finally pulled myself out of my rut thanks to a friend’s coaching and made it to the last dungeon. Although I’m still not completely finished, I’m amazed more than ever before at how rich the game’s story is, and how courageously it addressed major issues in Japanese society (and to some degree, American society as well). If you haven’t gotten this game, get it — it’s truly incredible in every way a game can be.

Ross: It’s been a busy week for me, but I’ve finally convinced enough people to buy Demigod now that we can field a 5 person team. Also been enjoying Valkyria Chronicles – great game so far, but I wish it rewarded strategy a bit more since it seems to emphasize blind charging to the objective. Also gotten in a few rounds of SFIV now that I finally got my fightstick (Yay!)