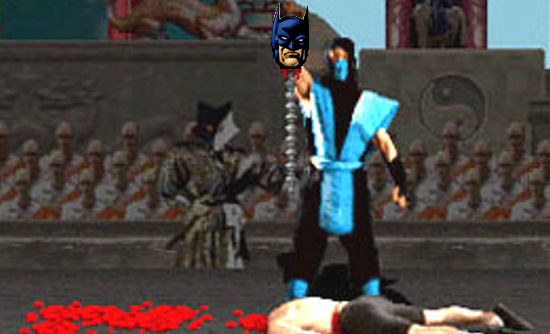 Midway may have bowed to DC Comics, but we at Destructoid don’t have to. While Ed Boon and the gang set about neutering their videogame to appease a bunch of killjoys who don’t want their precious Batman getting pretend-killed, I have taken it upon myself to restore order.. Behold the image that the comic book industry would not let us have! Gaze upon its wonder and be stricken with madness, for to look upon such insanity is insanity itself.

In between poorly crafted pictures, I played some games this week, and so did my colleagues. Hit the jump for our evidence.

BATMAN’S HEAD IS BEING HELD BY SUB ZERO IN THAT IMAGE! THE WORLD ENDS WITH BATMAN’S HEAD!

Nick: Haven’t had much time to sit down and play games for “pleasure,” which is not to say I haven’t had a chance to enjoy some in short bursts. Of course, I spent some time with the games at Midway’s Gamers’ Day —Wheelman, TNA Impact, This Is Vegas, NBA Ballers: Chosen One. At home, I’ve been trying to get through the six levels of the Ninja Gaiden II preview build, and this weekend I just started playing (for review) Teenage Zombies: Invasion of the Alien Brain Thingys, which so far as been a genuinely funny, inventive little platformer.

This coming week, though, I will start rocking Operation: Darkness (Nazi werewolves FTW!) and I will become Judas Priest with the first downloadable full record on Rock Band.

Dale: Even though I just finished up reviews for Arcana Heart and Hot Shots Golf: Out of Bounds, I’m continuing to play them both. They’re that fun. I’m taking my sweet ass time with Crisis Core, and it gets better with every session. And, coming out of left field, I’m re-playing Tail Concerto (PSOne).

Colette: Working on a slow collection of all of the side quest items at the end of Lost Odyssey and enjoying some vintage goodness like Metal Gear, Snake’s Revenge, Uninvited and Sanriotown, the latter which I played at 1 am last night drunk with exhaustion.

Gameboi: I’ve managed to squeeze in some time with Batman Begins, as well as a 2-day joyride (anyone miss me on the front page?) with Gran Turismo Prologue. Other than that, it’s been the usual fare: online fun with CoD 4, UTIII, and a smidgen of Warhawk. I also spent the past few days trying to get my damn 9-digit MGO code to work. Thanks to one of our Dtoiders, I was able to talk to an actual person *GASP* and trade my busted code for a working one. Believe it or not, I spent all day yesterday downloading the beta, and about 70% of the “update.” I sure hope it was worth the trouble. I already know what you are thinking: It’s a beta dumbass….. it’s going to be broken. Judging by the experience thus far, that’s a fair assumption.

Hamza: I played some Battlefield: Bad Company the other day. I can’t talk about it yet, but I can say that I won some Swedish chocolate for stabbing people. STAB STAB STAB.

Grim: I went a little eBay crazy this week and ended up getting a bunch of retro games: A Link to the Past, Knights of the Round, Alien vs. Predator, Super Star Wars, and Legendary Wings. Dear God, I forgot how f***ing hard these games are. On PC it’s been mostly TrackMania Nations Forever and Fallout 2.

Jim: Still battling through some Viking: Battle for Asgard but it has been thoroughly replaced by my recent purchase of God of War: Chains of Olympus. The enemies seem way cheaper than in the original game, but you have a few abusive moves of your own so I guess things are more or less even. Doesn’t do much new — it’s just God of War on the go, but that is not a bad thing by a long shot.

Chad: I don’t want to ruin anything, but there is a sequence at the end of the first disc of Lost Odyssey that made me ball for 45 minutes. I timed it. It was ridiculous. Like, projectile tears. Wow.

Husky: NHL 08, NHL 08, NHL 08, and NHL 08… It’s sad that when hockey playoffs come around the only disk that makes it into my 360 is an NHL one, but hey… when you’re in the same room as a bunch of other hockey fans during intermission what the hell else are you supposed to do? Cuddle?

Dyson: Haven’t had much of a chance to play anything at all, really. The most time I’ve spent this week has been on the original Metal Gear for the NES, and that’s about it. I’m staring at the copy of The Orange Box that Anthony bought me, wondering if TF2 is a game worth trying out. Most likely, I’ll just keep playing Galaga on Live instead.

Orcist: As the usual for the past month, I haven’t been playing much. Trying to pass my junior year of college is for the f*ckin’ birds, dudes. Anyway, a little BioShock, some Phantom Hourglass, and that’s about it.

Samit: I had two tests this past week, so I didn’t really have much time at all for gaming. Of course, I made time for Warhawk on Wednesday night, but other than that, I haven’t played much of anything on my PS3. However, I headed out to New York Comic Con yesterday and today (along with a bunch of Dtoiders), and there were a crapload of video games there.

I got some hands-on time with: the (rather underwhelming) Metal Gear Online beta; an awesomely bad, straight-out-of-1998 shooter called Target: Terror (think Time Crisis in the arcades, but with the Wii Zapper); and an addictive XBLA puzzle game called Roogoo. The Iron Man game and Civilization Revolution (both on 360) were there as well, but I didn’t get a chance to play them.

Also, Orcist, I feel you on the whole junior year thing. The next four weeks are going to suck.

And what about YOU sacks of pus? What have YOU been playing, eh? EH!?