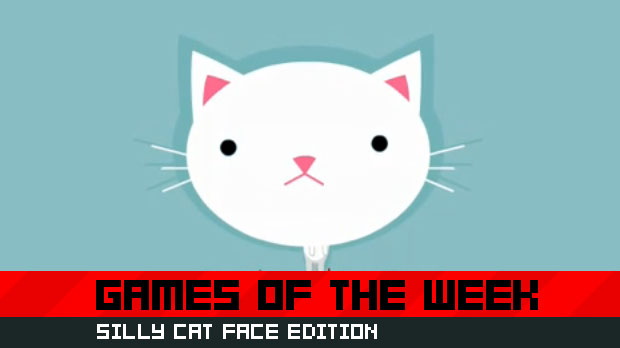 I’ve started watching Cat Face from Weebl’s Stuff. I don’t know why. I think the repetition of the exhausted-yet-amused “Silly Catface” at the end of each episode is increasingly amusing. In any case, it’s a cartoon about a cat with a big floating face. That’s reason enough to be worthy viewing.

As always, videogames have been played with our hands and minds, which shall now be confessed to the Destructoid community. What did YOU play? Hit the jump to find out our own games of the week!

Holmes: I’m been trying to finish Rune Factory: Frontier for review, and it’s taking forever. Hopefully it will be over soon. It’s a fine game, but one that is clearly meant to be played at a leisurely pace over the course of a few months, not rushed through for review in a week.

Also, also, I repurchased Ribbit King, a game I lost to break-up a few years ago. It’s a golf game, except the golf clubs are mallets, the golf balls are frogs, and the game is played by various animal-things, all on different planets. Another selling point is the game’s “master of ceremonies”; a sort of nibbler-looking alien who sounds sort of like Paul Lynde.

So yeah, it’s been a pretty good week.

Oh and I almost forgot, I finally got to play MadWorld multi-player with someone who’s actually into it. It’s a lot more fun than I thought, and can get pretty heated when matches are close. It’s still not all that deep, but there is some strategy necessary to win matches against someone who knows what they’re doing.

Ross: I feel like I don’t even need to say TF2  and Left 4 Dead anymore, since I play those every week. You can just automatically add them in.

I’ve been playing Grand Theft Auto: Chinatown Wars a lot on DS, and I’m surprised by how much I enjoy it. GTA4 was kind of ‘meh’ for me, so I was pleasantly surprised to find out that Chinatown Wars is a lot more fun. On the recommendation of Naia, I’ve also restarted Lost Odyssey (I stopped in the middle of Disc 2 last time) and will hopefully be finishing that. A bit of Street Fighter IV as well, and I picked up Dishwasher a couple days ago and have really been enjoying that as well. It reminds me a lot of Castle Crashers.

Concelmo: I finished Mother 3 earlier this week and it changed my life. The game is absolute perfection in my eyes. The story is moving and surprisingly adult, the sprite work is stunning, and the gameplay is deep and addictive. I actually didn’t want it to end (rare for a 30 hour game) and am sad that it did. You know that feeling you get when you finish a game and know you just played through something that will remain a classic in your eyes forever? That was my experience with Mother 3. In fact, if it wasn’t for that pesky masterpiece Final Fantasy VI, Mother 3 would be my #1 favorite RPG of all time. Now, it’s comfortably sitting at a close second.

Also, I started Deadly Creatures, which is a completely different experience. Haha. Still, I really love it!

Chester: Trying to get through the surprisingly long Godfather II on the PlayStation 3 for this week’s review, as well hoping to get some time in with Flock! on Xbox LIVE Arcade. I’ve also been playing Guitar Hero: Metallica which is a surprisingly good package, but just keeps going… I keep unlocking songs when I feel like I should be done. That’s a good thing, for sure, but a bit frustrating when I want to get through a career before I write my review.

Sterling: Played the Red Faction: Guerrilla demo, which counts as the first time I payed attention to the game. Demo was not very good, but it doesn’t seem like that could be totally indicative of the game itself, so I’ll tentatively look forward to giving the full thing a spin. Also “played” Lux Pain for review. I seriously have no clue what the fuck that “game” is, or why I don’t completely hate it. I also just started the new Crystal Chronicles but my attempt to go online with the DS version was total laggy fail.

In other news, my 360 Red Ringed right as I was about to play The Dishwasher for review. Luckily though, I used my Internet fame and Jimfluence to get Microsoft to fix the problem quick and hopefully I get something back by the time this goes out. Score one for throwing tantrums at people!

I have also been playing X-Men Origins: Wolverine, but I am embargoed on that little number. Stay tuned for Jimpressions on Tuesday!

Grim: I have been playing a ton of Roller Coaster Tycoon this week for whatever reason. Having people pay you to be killed on your roller coaster is the greatest thing ever, I’ve decided. Besides that and The Dishwasher, I also got a few new SNES games like Demon’s Crest and Secret of Evermore, but haven’t had a whole lot of time to sink into them yet.

Nick St. Chesticus, Defender of Games: Not to derail this games of the week thread, but I can’t imagine why you thought the demo for Red Faction: Guerrilla was “not very good.”

Lord Sterlingdark, Destroyer of Games: I think it had something to do with the demo not being very good. That was a possible cause.

It was very short and the mission didn’t strike me as compelling at all. If I didn’t already know Volition did good work, I would not have been sold on the game on the strength of what they chose to show off.

Chesticus: The idea, I believe, was to show off the destruction possibilities more than anything else. For most (and for me) that should be enough to sell the game; it’s ridiculously amazing tech.

Niero: I’ve been subjecting everyone that comes over to an evening of Fantasia 95‘ (which is a Gal’s Panic bootleg) where you avoid roaches and maggots while cutting out photos of naked people and avoiding gunfire.  Can you imagine being at the table for that game pitch?

Bennett: Fantasia 95 is the best game ever. When Niero and I aren’t playing that and enjoying the joys of picture of naked women and playing as Robocop, we’re working through story mode on Resident Evil 5. On my own, I’ve played Avalon Code, Silent Hill 2: Restless Dreams and Rhythm Heaven. I’ve been in the mood for some good old fashioned horror lately, so I may dive into some Fatal Frame later tonight!

North: I’ve been playing the battery dead on my DSi. I think I’ve recharged it 3 times this week. I love a lot of the DSiWare that’s on the Japanese store, like the Katamari puzzle game and the silly paper airplane game — some of it is so simple and stupid, but it’s so nice to be able to dial up games on a menu and go at ’em. It’s kind of like a legal R4.

Aside from this and a bunch of games for review/preivew, I’ve been playing the crap out of Tatsunoko vs. Capcom this week. I fell asleep with controller in hand playing it last night.

Sterlingdark: I’m not saying the tech isn’t good, it is, and I went back to play the demo again and enjoyed the destruction. I didn’t like accidentally leaving some invisible mission zone and having five seconds to get back, but whatever. All I’m saying is that the demo didn’t wow me, and they could picked a less dull mission to sell the game. It’s not like I impugned the game itself or anything. It’s just a demo.

Hamza OMG IT WAS HIS BIRTHDAY THIS WEEK Aziz: Still playing Henry Hatsworth. That game gets fucking hard!

Sarkar: For me, the mark of a great game — specifically, regarding games that I review — is if I continue to play it after completing the review. Well, my review of MLB 09 The Show went up nearly two weeks ago, and I’ve continued to play the game’s Road to the Show mode because it’s just so damn fun. I’ve been tearing up the minor leagues — right now, I’m nearing the end of my second season (this one was spent in AAA, while I started out in AA last year), and my stats are eerily similar to last year’s (ERA of 1.03, 14-4 record). Hopefully I get called up to the majors in September (it’s August right now)!

Dyson: Henry Hatsworth and Tatsunoku. That is all.

Holmes: And I totally forgot how much god damn Super Punch-Out!! I’ve been playing this week. I’ve probably spent five hours alone on just trying to get the record on beating Nick Bruiser. I can knock him down in 5.78 seconds, but the bastard wont stay down.

Also, It warms my heart to hear about all y’all playing Tatsunoko Vs Capcom. We totally have to have a tournament one of these days.