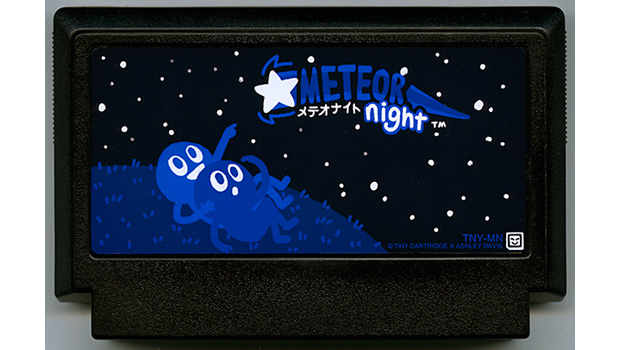 Every year, the Meteor store in Tokyo hosts the My Famicase Exhibition, a gallery in which artists submit  cartridge labels for fake Famicom (the Japanese NES) games. For the 2011 show, game blog Tiny Cartridge was able to participate, concocting a concept for “Meteor Night” and tapping Ashley Davis for the art.

Fast-forward to this year’s A Game By Its Cover, an indie game competition that tasks devs to create games based on fictional game art. And surprise, not one, not two, but three entries are based upon “Meteor Night”! The concept is so vague that the games are bound to be wildly different.

A Game By Its Cover runs through August 18, and the winners will be on display at this year’s GameCity festival in Nottingham, England. I hope at least one of these three games make it through!

Filed under... #Artsy Fartsy#Cooler than the other side of the pillow#Nintendo Entertainment System