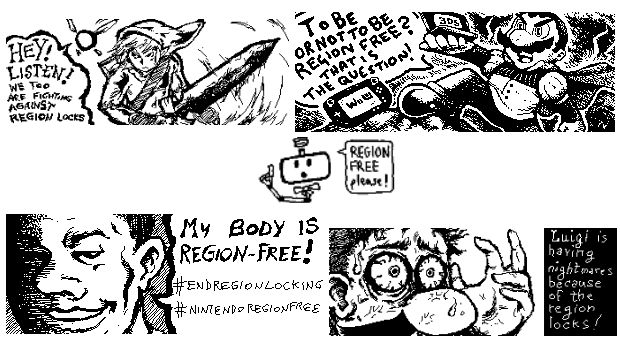 Tear down the wall!

With Microsoft reversing all its content control policies on Xbox One, and Sony already planning a region-free PlayStation 4, Nintendo is insisting on keeping all the territories separated on Wii U. Fans are now taking the platform holder to task.

Cheered by recent efforts to appeal to Microsoft and Sony, gamers around the Web hope to convince Nintendo to abandon the outdated notion that we’re no longer a global market, and get it to stop region-locking its sytems. In a post on NeoGAF, a massive list of Miiverse posts have been cataloged, as users take the pleas direct to Nintendo’s proprietary social network.

Naturally, Twitter is a big part of the activity, with the hashtags #EndRegionLocking and #NintendoRegionFree being used, alongside an official Twitter account for the campaign, @EndRegionLocking. Posts on Reddit are being made, and the obligatory petition is all up and ready.

I lived in Britain before Nintendo paid real attention to it, waiting up to a year for games already out in the rest of the world. It was bloody inane, and the fact Nintendo fought against importers sent a message of contempt toward PAL region gamers. It’s even worse when, on a system hurting for games, Nintendo keeps certain games locked squarely away in specific regions.

Region locking feels like a system of antiquity in a global market, so if the near-impossible can be done and Nintendo can be reached, I say go for it!