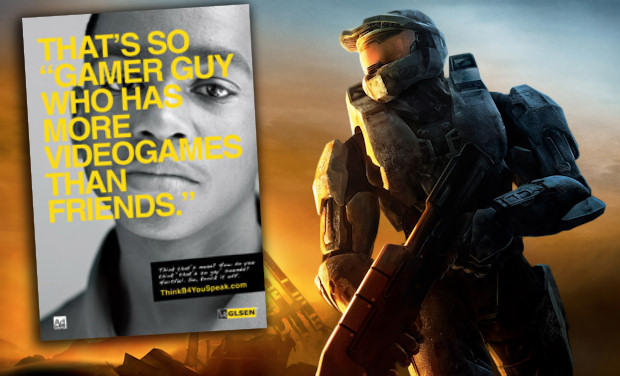 Next time you want to say “That’s so gay,” you might want to instead consider, “That’s so gamer guy who has more videogames than friends.” That’s what anti-homophobia outfit “ThinkB4YouSpeak” has done, using a typical gamer stereotype as part of its poster campaign to discourage use of the word “gay” as a derogatory term.

The idea of the campaign seems to revolve around replacing the term “gay” with other negative stereotypes in order to show how ridiculous the whole practice is. A most noble effort, although it makes the posters look more like they’re just attacking other social outcasts or figures of fun, rather than protecting any other group.

Nevertheless, homophobia is distressingly rampant on online gaming platforms like Xbox Live, where people who truly do have more videogames than friends are able to hide behind the wall of anonymity and express their backward opinions about gay people and women, so it’s rather fitting that they’re being used in this campaign.