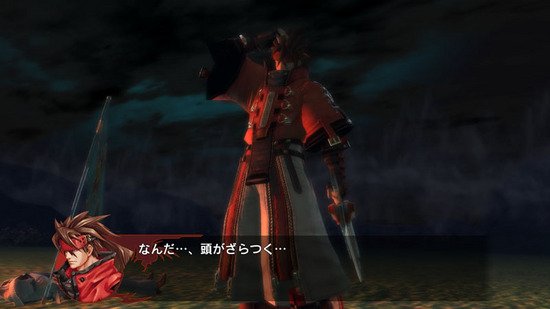 While I’m still upset about the game, I’m glad that Famitsu did an interview with Daisuke Ishiwatari regarding Guilty Gear 2 a little while ago. They got a set of screens from the game to show, which were mildly interesting. Now, though, High-Score Online has gotten a hold of a set of new images from the game.

Some of the details that came from the Famitsu stuff is that you’ll be able to do some of the cool Guilty Gear stuff like move cancels into combos, in an attempt to move all the bells and whistles of the 2-D fighter into the 3-D realm. The interview was a little above my head, so I couldn’t pull too many details. Give it a watch, though, if you can speak some Japanese.

As a Guilty Gear fan, I just wish that I didn’t have to stick through this game playing as Sol. I’m sorry, but he’s just one of those characters that I can’t care about, but since he’s one of the “balanced starter characters,” he gets a ton of play, and therefore is the headliner in this game. Ah well. Time to go back and cry about it in the community blogs.

[Thanks for the new images, Golden Donut!]