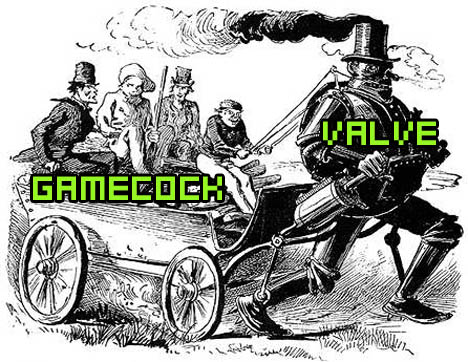 Those of you disappointed in the less-than-stellar performance of Insecticide on the DS, but not inspired enough to put forth the momentous effort required to pick it up for the PC, take heart! Gamecock has announced an agreement with Valve Studios allowing them to launch their titles on Steam starting today.

Part two of Insecticide, Legendary, and Velvet Assassin will be available on Steam later this year. While I’m hesitant to spend more money on Insecticide, there’s just something about bug noir I really can’t resist, especially sans hard copy. Hit the jump for the full release.

GAMECOCK TITLES TO BE DISTRIBUTED ON VALVE’S ENTERTAINMENT PLATFORM, STEAM

Cockpit, Austin, TX – July 1, 2008 – Gamecock Media Group and Valve Corporation today announced an agreement to launch Gamecock titles on Steam, a leading digital distribution platform for the delivery and management of PC games and entertainment content with over 15 million accounts around the world.

The all new Extreme Trail is a twenty-mission set that tests the skill of even the most expert Crusader players, with over 10,000 units on the battlefield. Players will find challenging new A.I. opponents and 30 stand-alone maps for multiplayer or single-player skirmishes, plus, the complete original Stronghold game. No RTS fan can ignore Stronghold Crusader Extreme as the pinnacle of hardcore warfare.

Insecticide Part 1follows the exploits of Detective Chrys Liszt as she untangles a web of corruption on the streets of Troi. This film noir storyline plays out through hard-boiled, fast-shooting action scenes and clever adventuring in a world where bugs have evolved as the planet’s dominant race.

Additional Gamecock titles – including Insecticide Parts 2, Velvet Assassin, and Legendary – will be made available via Steam later this year.