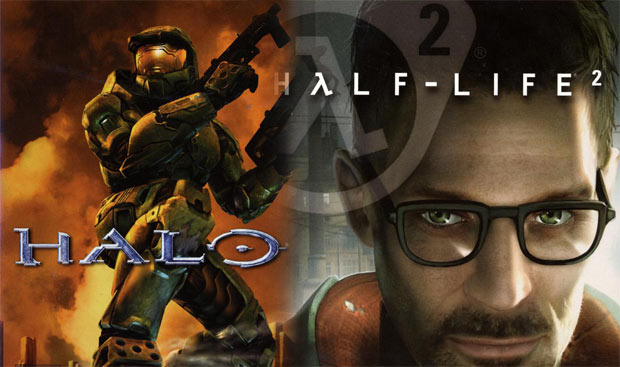 Last week I introduced a new format for these weekly game debates, and it went great! I used two of the most loved series in the game industry of all time, and the result was just as vicious from both sides as I expected to see. It was a lot of fun to read through everyone’s extra commentary on the additional bonus questions, and it offered a whole lot more insight into what we considered before casting our votes. Here was the outcome:

First of all, yes, spinoff games like Halo 3: ODST and Half-Life episodes are included, but Counter-Strike and all other mods of either game are not counted. From there, the choice is up to you.

Which series do you like better as a whole, and why? What aspects or individual games of the series made up your mind? Is your choice mainly due to support for that series, or your dislike of other series? Give it some serious thought, share your thought process with all of us, and then get some FPS friends to join in on the fun.

New Bonus Questions! Hit the jump to see not one, but all of the bonus questions. From now on I’m going to try a slightly new format to encourage more discussion! Feel free to suggest bonus questions of your own that you’d like to see used in next week’s debate topic, which is also listed below.

Let’s try something new! Feel free to just skip all of this part, and only answer the debate as usual, but for the sake of even more discussion, each week I’ll be posting multiple bonus questions. They’ll be after the front page fold, and also posted as the first comment on each debate as a reminder. Again, this is just optional, but jump in and have fun exploring any/all of these reasons why you loved or hated each game/series!

BQ1. What are you hoping to see in the future from the series you voted for? Feel free to get very detailed and long-winded!

BQ2. Name one thing you like better about the series you didn’t pick.

BQ3. What was your favorite and least weapon in each series? Why?

BQ4. What was your favorite and least favorite enemy monster/alien in each series. Why?

BQ5. What was the moment(s) in each series that emotionally affected you the most?

BQ6. What is your favorite level or environment in each series? Why?

BQ7. Pretend you were the creator of each series. What are some things you would have done differently?

Each week I will post what next week’s debate will be, and allow you to all post your own “bonus questions” in the comments for next week’s debate. I’ll choose the best of the bunch (I can’t catch’ em all, this isn’t Pokémon) and then we can get some serious feedback from all different gamer perspectives on not just each game/series, but also a few individual aspects of those games/series. Have something you’re dying to know what other games thought of in the game or series? Post your question in the comments and find out what the response is!

Metal Gear Solid series versus the winner of this week’s debate!

As usual, there’s always an open door policy on suggesting future game debates in the comments. Don’t be shy!