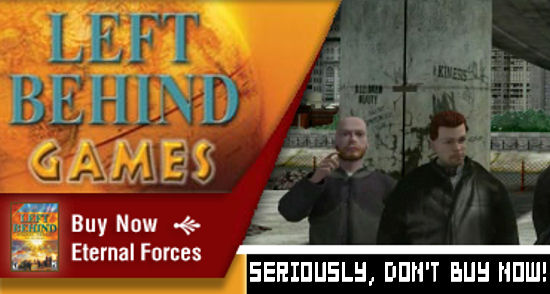 Here’s a rather pitiful piece of news regarding Left Behind Games. The publisher of Left Behind: Eternal Forces has been sending threatening letters to blogs who dare to say bad things about its work. Eternal Forces is an RTS based on a Christian book while its publisher appears to be quite sanctimonious and self-satisfied. Of course, if Left Behind reads that, it might sue me!

Here’s what Gameology has to say:

…If you’ve been following this blog for a while, you’ve probably seen that we’ve posted some rather critical remarks on the game Left Behind: Eternal Forces… we’re apparently on [CEO] Troy Lyndon’s radar… On Monday, they escalated their response by sending me a nastygram threatening me with legal action unless I remove “false and misleading” comments from this website.

…The goal of this letter is apparently to intimidate me… On free-speech grounds, then, I feel obligated to stand by my comments and not be intimidated by a frivolous threat intended to chill legitimate criticism.

Apparently, if you dare criticise Left Behind’s games, you are posting “false and misleading” information. How arrogant do you have to be to send something like that? This isn’t the only instance of bully-boy tactics on the part of Left Behind either. Hit the jump for another blog that’s come under fire from Troy Lyndon and his pals. Also, Eternal Forces looked terrible anyway.

I got a letter today from… a Pennsylvania attorney representing Left Behind Games warning me that if I did not remove all of the false and misleading information about their product that I would face legal action.

The Left Behind folks, still reeling from their disastrous launch last year, are gearing up for the release of their expansion pack next month… As an offensive strategy, they are trying to intimidate the Christian, Jewish and Muslim leaders in the blogosphere who led the charge against this awful game…

…Christians should not sit silently while  corporate money-grubbers make a buck out of perverting the Christian faith.  Nor should we sit silently when a game is marketed to children promoting religious violence while American soldiers are dying overseas in the middle of a religious and ethnic civil war.