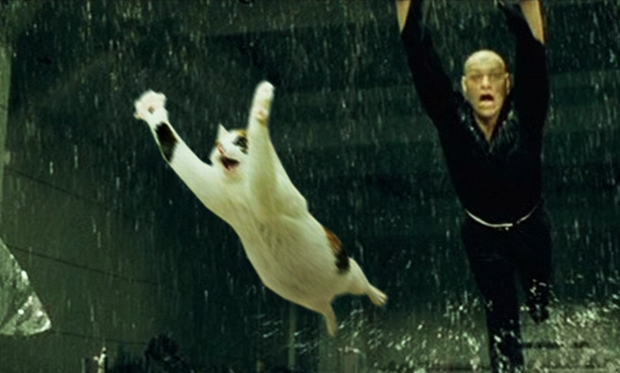 Scandal! A short while ago it was revealed to us Metroid is undeniably the same as Citizen Kane. But that, my friends, is just the tip of the iceberg. Through extensive research and wild stretches of the imagination I have made the shocking discovery that the plots of all our favourite games have been blatantly copied right out of other forms of media! Years of boredom and paranoia pay off as I connect the dots and cast aside the facade that has blinded us for years. Join me now as I uncover the truth behind this conspiracy that will surely rock the games industry to its very core.

I suggest you put on a hat, ‘cause I’m about to blow your mind.

Metal Gear and Short Circuit both deal with themes of technology becoming far too advanced for mankind to handle. The heroes of both are the products mankind’s experiments, they are capable of things that far surpass that of the average man, and both are trying to find a sense of identity beyond what they were created for. Not to mention that both Snake and Johnny5 are lied to and exploited by man and tricked into committing various shady deeds. And they both have robots, what else did you steal Kojima!

Final Fantasy 8 and Saved by the Bell are both coming of age stories about a small group of friends and their journey through school life. We join both casts in their adolescence as they learn about love, life and about themselves. Both principals have “issues” with their wives and both stories involve love triangles and really embarrassing band moments. The way that we can see the inner workings of Squalls mind through text is blatantly aping when we see what Zack is thinking when he says “Time out” and talks to the camera.

Drakes hunt for El Dorado is a carbon copy of the Goonies search for the treasure of One Eyed Willie. They involve the hunting of Spanish gold. They both involve a cast of likable and cheeky characters. They both involve pirates, puzzles, pitfalls and booby-traps. And they both have plot twists half way through that involves strange deformed monster-men. Uncharted is one truffle shuffle away from being an exact clone of The Goonies.

A tale of a man surpassing insurmountable odds. Taking on one undefeatable foe after another. Going the distance for the woman he loves. Beating these opponents takes a great physical toll on our hero and he can only overcome them at great personal cost. These opponents are not pure evil; they are merely going about their lives how they see fit. And just as Wander is guided by an ethereal voice, Rocky is guided by the ghost of Mickey who tells him that Mr. T “Ain’t nothin’ but a bum”.

A small group of people are trapped in a mall like area and forced to fight a much larger group of monsters. These monsters only grow in numbers as an average man is forced to take on the role of a hero and try to stop the threat of the monsters while trying to help as many survivors as he can. Themes of desperation and consumerism ensue.

A young man’s parents ditch him and send him to stay with relatives. He is dragged from his life in the city and forced to move in with his uncle in an introverted community. Upon his arrival the young man’s big city cool initially wows his peers in his new school and he soon finds himself at home in this new environment. Both have theme songs that will get stuck in your head for hours.

There you have it! Conclusive proof that every game plot is clearly imitating some movie or TV show. With the mighty lance of JOURNALISM we have pierced the veil of ignorance that surrounded the games industry. It’s time we stand up to developers and say “No more! We deserve better than this.”