Please don’t turn me into a marshmallow, your grace.

YOU WERE RIGHT AND I WAS WRONG:

BRONN is spelled with a double n. It’s been a while since I’ve seen all these names in print!

That said, my main point of contention with earlier season 7 episodes continues to problematically rear its head: characters are now moving across this world multiple times in the same episode! As some of you have pointed out, this contrasts so greatly with the sequential timing of the rest of the show that it’s jarring to watch; we’re not used to characters traveling by foot, horse, and wind-powered ships to move from extremity to extremity so quickly. Usually, there have been journeys, or it was only happening with one person amongst the cast, not the entire cast jumping around like Westeros was a checkers board and our cast the checkers. It is a bit much, but it also is what it is.

Maybe they could explain it away more easily if other people started riding dragons? Let’s see where that goes.

Outside of the problematic geography and ease of travel, many plot lines continue to build to a forthcoming conclusion and that is sort of fun. Reunions continue to abound, some expected (Tyrion and Jaime) some far less so (read on, spoilers ahead).

In the south, people continue to worry about the problematic nature of dragons, that is, they tend to kill people, and often by burning them alive. Followers of the Mother of Dragon aren’t really sure how they feel about this, now that it’s happening in their own homeland–it’s fine to burn a bunch of slavers, but when they start burning Westerosi lords and your former arms-men, it’s easy to be conflicted. And enemies of the Mother of Dragons, well, they’ve now had a taste for the reality of the situation and found it to be … bitter. Far too much reality, it turns out. Up until meeting a dragon, they thought they could win. Now, not so much.

[Editor’s Note: This recap will obviously go into detail about last night’s episode of Game of Thrones, so there are going to be a ton of spoilers. Final warning! ~ Nick, copied and pasted by Rick]

[Editor’s 2nd Note: Apologies for my drinking my way through the episode and writing this recap, but it makes it hella more fun ya’ll.]

Last week’s episode culminated a la cliffhanger with Jaime sinking into a watery grave, possibly? We begin episode 5 with Bronn pulling Jaime’s corpse out of the water. Surprise! Twist! Jaime lived. Well… did they walk all the way there underwater? Because they did not swim. Not wearing that armor, and sword, and gold hand. So it’s a fun bit of dialog for Bronn to tell Jaime that a dragon doesn’t get to kill him, he doesn’t get to kill him, only he (Bronn) gets to kill him until he gets what he’s owed, because clearly, Jaime should have drowned.

Cut to Tyrion surveying the battlefield from up close and oh shit, is that dragon dung? Nope, it’s a big-ol-burned-turd of Lannister knights. And um, well, there are some surviving Lannister soldiers. Do they bend the knee to Danny or do they become human marshmallows? Human marshmallows you say! Delicious! At least that’s what Randyll Tarley and his son Dickon (no eunuch there) must have thought, because they opt for death by dragon (mistake!). Thus, making Sam lord of house Tarley! Boom, that spritely son of a bitch is moving up in the world faster than Ser Jorah has his skin peeled. 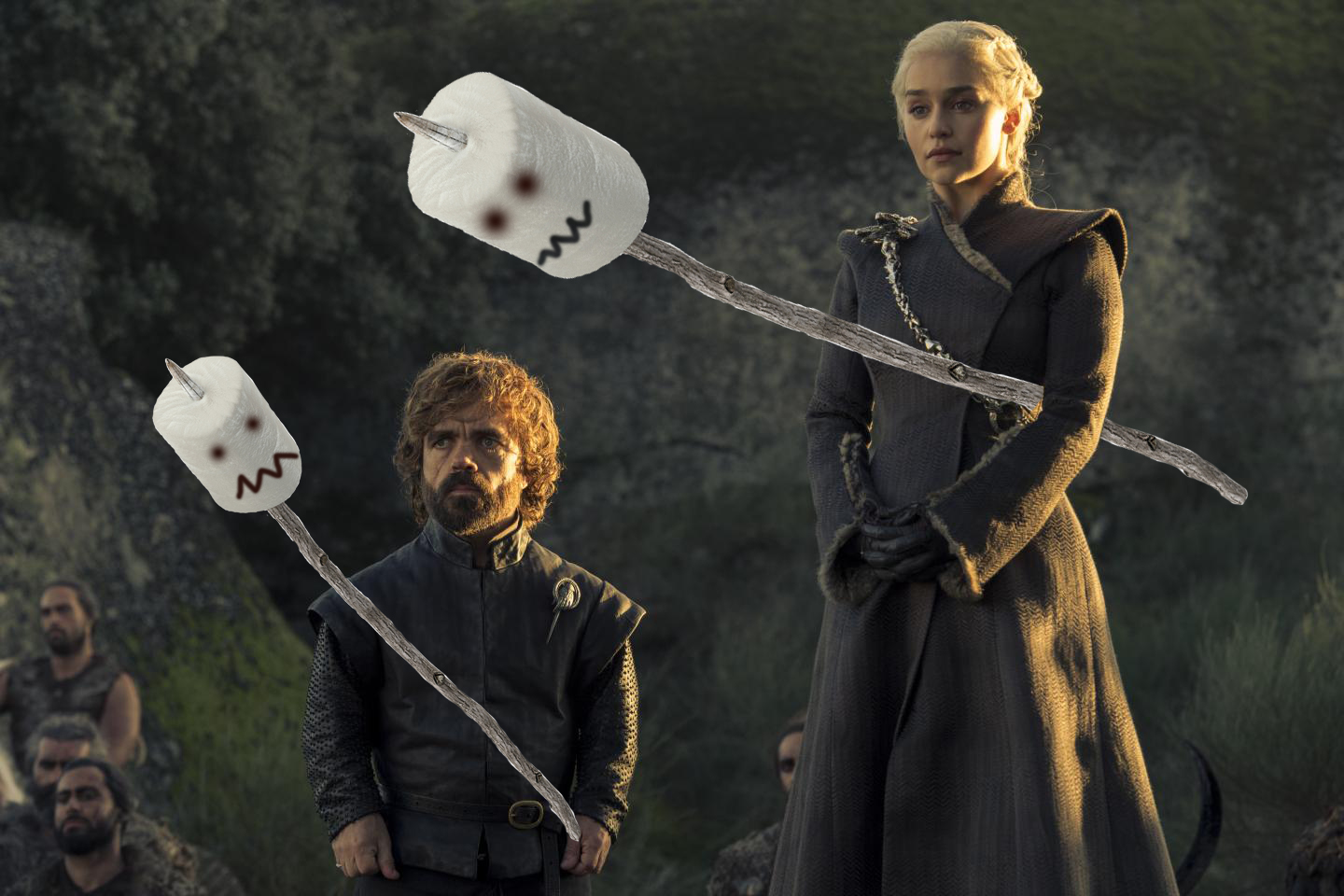 “Excellent choice, your grace, these human marshmallows really are best burnt to a pile of ash!”

Jaime is magically back to King’s Landing telling Cersei that it’s hopeless and they should do something. What he thinks is unclear. But she’s not giving up, oh no. She’ll have the Mountain kill everyone! Maybe?

Back to Dragonstone now. Keep up, this is a fast-paced show! And Jon watches Danny land her dragon like a massive hang-glider. I suppose massive scorpion bolts to the wing don’t really hurt dragons, because it’s gone and the dragon is showing no ill wear. And then Drogon sniffs Jon. Like sniffs him good. Is it good to eat, precious? Mayhaps, precious! But it likes the JonSnow. It trusts the JonSnow, and so Danny doesn’t turn him into another human marshmallow. Oh well, precious, there will be others to eat.

And then Ser Jorah is there! My gawd—sorry—my seven gawds / drowned gawd / gawd of light / gawd of death—Ser Jorah is there, and he and Danny look like they may get it on! She says he’s “looking strong” and Drogon gets jealous because he senses Danny’s got woman heat for the JorahMan. Mayhaps Drogon will turns the JorahMan into a marshmallow? Mayhaps, yes, precious.

Damn, suddenly, we’re with Bran, in Winterfell, and he’s got weird milky eyes and he’s sent ravens out, and the ravens get past the wall, and they see the army of the dead! Well shit, there’s the Night King! And then Bran’s telling his maester to send ravens, for fucks sake! And, apparently, he did, for suddenly we’re in Oldtown and the maesters there are making fun of Bran’s maester. But Sam is eavesdropping and he says, no maesters, don’t make fun of that maester, that cripple is telling the truth about that scary ol’ Night King and his mobile zombie rave. This is getting real. If Lord Sam is going to order those maesters to do shit, they’d better, but oh shoot! They didn’t tell him about his marshmallow father and brother, so he doesn’t know he can give orders. Get back to scrubbing skidmarks from bed pans, Lord Sam.

Dragonstone: Tyrion and Varys drinking and talking about Targaryens turning people into human marshmallows. Are they better black as coal or golden brown? Cheers! 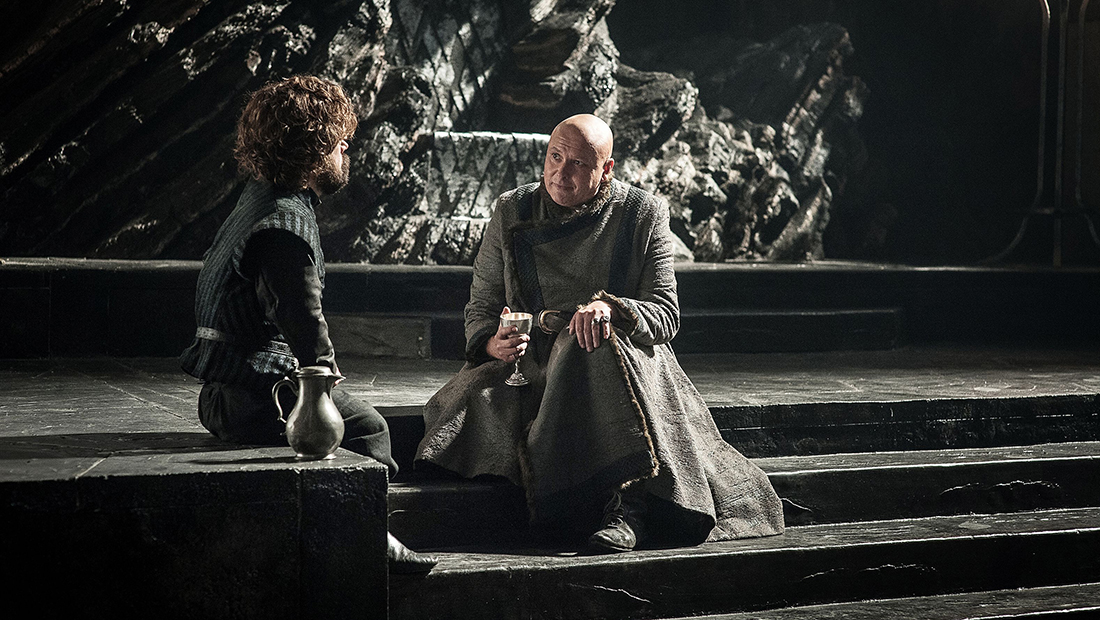 “Let us drink and talk of smashing hos, m’lord!”

Danny and her advisors in her smaller-than-Cersei’s-map-room. Why is it always a competition about size? What to be done about Bran’s bird-message? They’re going to bring a zombie to King’s Landing to prove they’re right. Damn. Ser Jorah and Jon will head north. Tryion’s getting the ol’ Onion Knight back to his criminal roots and is going to get smuggled into the Red Keep. Bronn helps. He always had a fondness for Willow and his people.

Jaime doesn’t impale Tyrion on one of the dragon skull horns. A good sign, to be sure. And then, well, emotions are running high. So he and Tyrion hug it out, like real, true Californian bros. 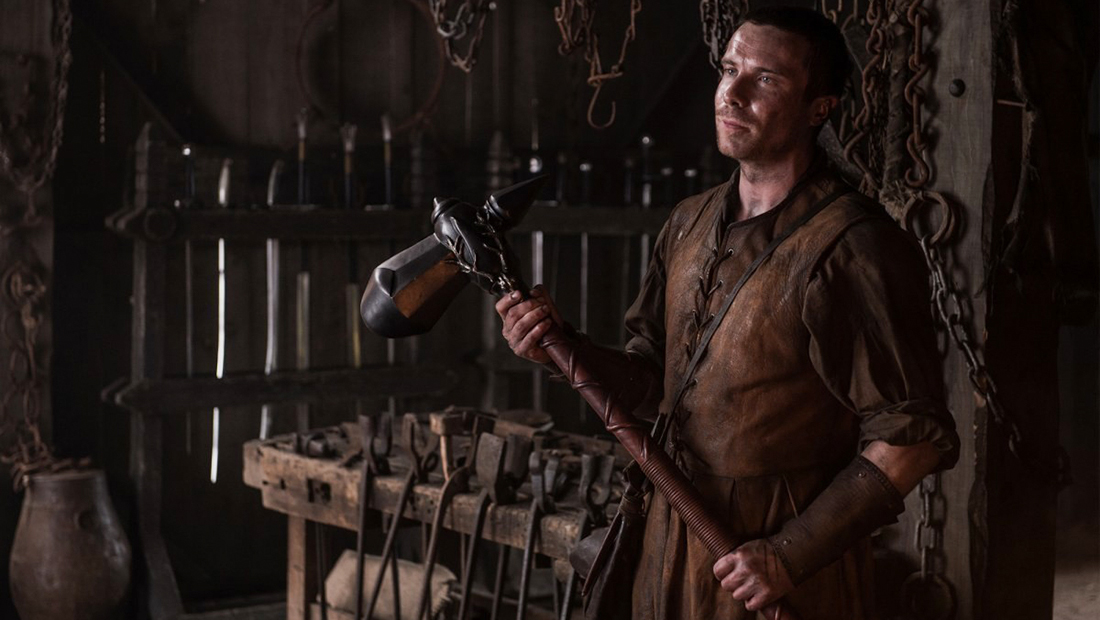 “I prefer to smash bruh. Face-smash.”

Ser Davos had business in Fleabottom, but he meant getting Gendry. Which, can I just say, finally, here? And when Gendry tells Davos that swords drool, hammers rule, my heart be still! I love this skinnier, less-beardy Robert Baratheon. May the face-crushing begin! And sure enough, a couple of wiley gold cloaks show up in true convenient form, just to allow Gendry to demonstrate his face-smashing capabilities—which aren’t half bad at all.

No one puts anything past Cersei (except when they do) and when Jaime tries to tell her he’s had a secret meeting with Tryion, she already knows. They’ll play the long game to get past the insurmountable odds currently opposing them (mainly Danny and her dragons). 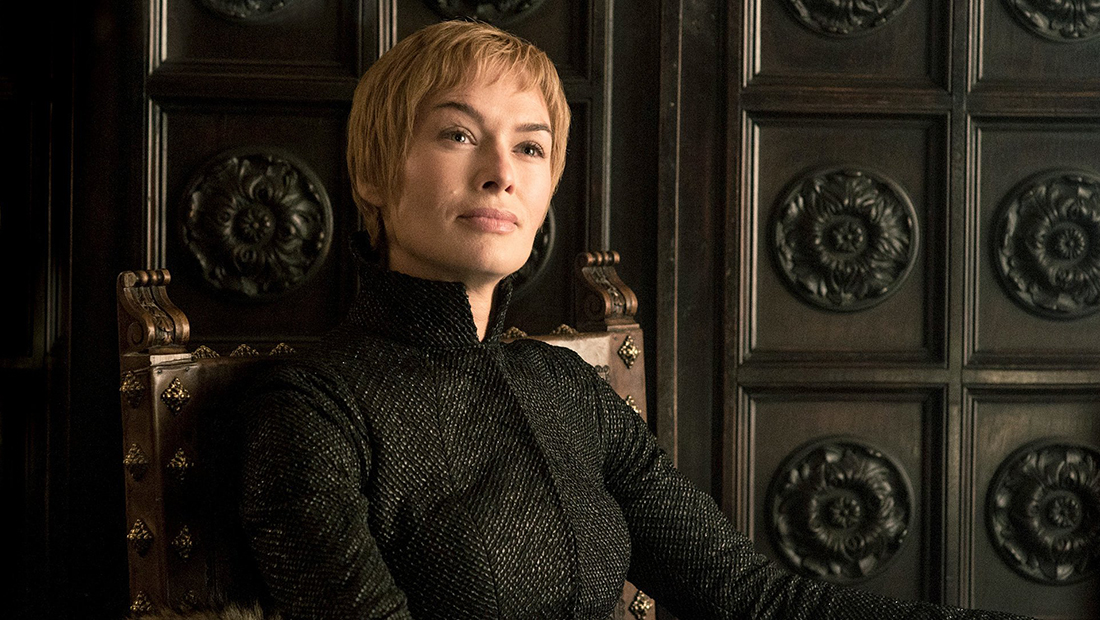 “Jaime, did Miley Cyrus pull off this hairstyle better than me? Answer truthfully, or die.”

Jon and Jorah are off for Eastwatch, and it looks like Danny might jump both their bones. It’s weird here, because, being serious for a moment, she waivers between this hard as stone, turn men into marshmallows queen of fire, and then a half-silly little girl who’s sort of got a crush on the emo bastard King of the North (and maybe her step father Ser Jorah, too). It seems, out of character, as she waivers back and forth. At least at this point in her storyline.

Sam’s leaving the Citadel because he’s ‘tired of everyone else getting to have all the fun!’ And he cuts off Gilly right when she’s about to read something that might reveal the parentage of Jon Snow! Damnit, Lord Sam, you are the worst lord ever! 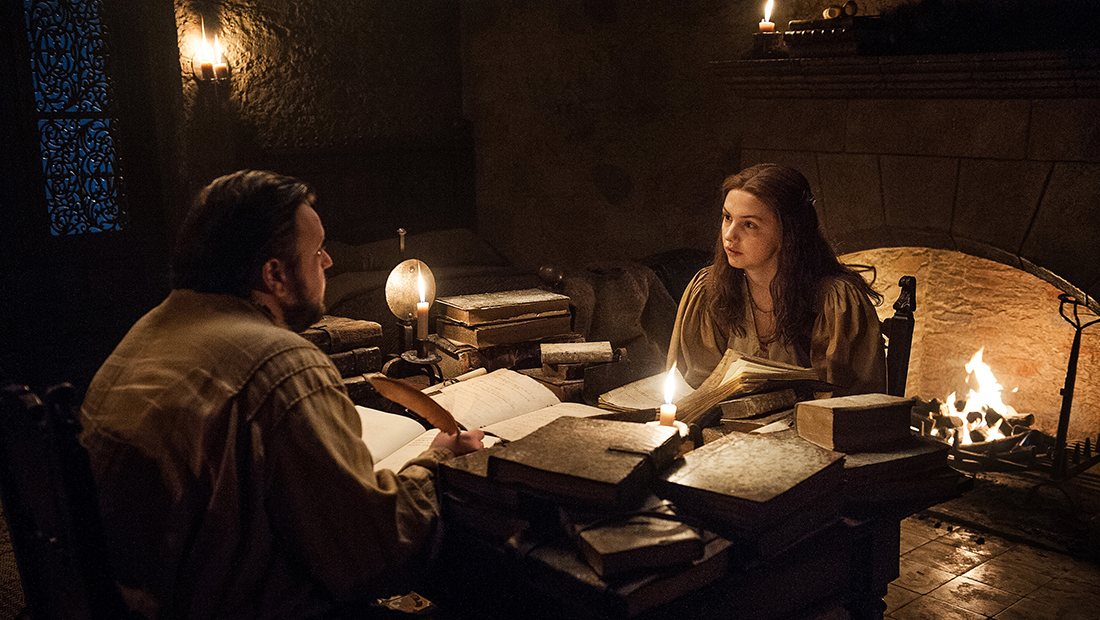 “Gilly! Don’t give away the JonSnow’s parentage yet! We’re going to dangle that one for a while still! Don’t make Lord Sam remind you of who’s whose wildling wench!”

Whoops, back to Winterfell, keep up friends, keep up. Even I’m getting confused. As Arya and Sansa have a weird meeting wherein Arya basically accuses Sansa of not quelling potential rebellion so as not to lose potential allies for herself (aka: you’re betraying the JonSnow, witch).

But not all gingers are witches (just one that we know of—Mellisandre), so perhaps that one’s unfair.

Then Arya decides it’d be loads of fun to play follow the leader with Littlefinger and it’s obvious that Littlefinger’s got all his little fingers in everything fingers can get in. He’s stll got it! And he’s plotting something. Something nefarious. Unclear what as yet, though things seem to be proceeding according to his design, and once more, he’s several steps ahead of a Stark.

Eastwatch. Like the episode’s title! Jon’s meeting Tormund, who’s super disappointed that Jon didn’t grenade Pod so that Brienne could come pay Tormund a sexytime visit. Jon, it’s bros before hos, bruh. Bros, before, hos. But, Ser Jorah’s there too, with fancy new emo armor to match everyone else, and it turns out so are The Hound, Ser Beric, and Thoros. That’s where they’ve been! Freezing their candied asses off in a tiny ice cell at the wall! Of course. And right about then we begin a frightful bit of dick-measuring as all sorts of past transgressions are brought to light between Gendry and Beric, Tormund and Jorah, and more. Until Jon, remembering what we just said about bros before hos, says, “Yo, m’bros, Calm down. This is gnarly. Like, we’re all on the same side, man! I mean, you’re a half-giant ginger with a whale dick, and Ser Jorah, you’re basically a lepper, bro. And Gendry, we’ve both had ginger witches try to give us herpes, but bros! We’re all still breathing! We’re survivors, bruhs. We’re on the same side. And they crack open a 30 rack and toast a few toasts before heading north of the wall. Insane, right?

THE MOUNTAIN: has this dude killed anyone since he reappeared in armor? I feel like not, right? They must be building this up for something grand.

With only 2 episodes left in this season, how do you think things will wrap up? Your predictions, please!