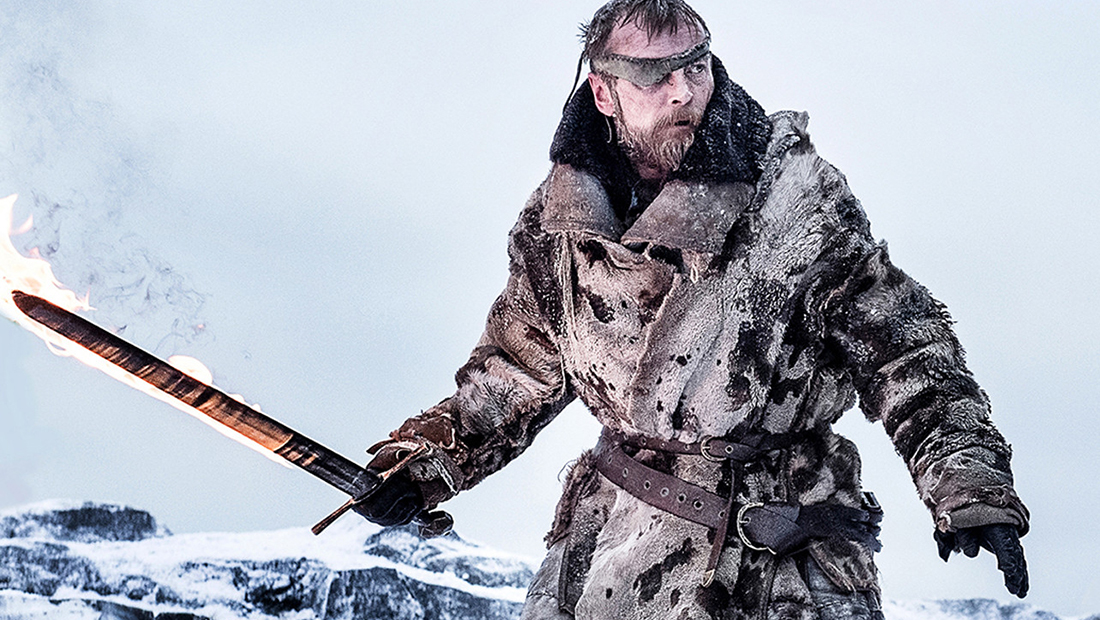 “Beyond the Wall,” the penultimate episode in HBO’s seventh season of Game of Thrones, concentrates its energies in one place, the north, with much of the action taking place exactly where its title suggests, beyond the wall. There are perfunctory throwaways to Dragonstone to establish where Danny is, and we get glimpses of the political jockeying unfolding at Winterfell, but the episode serves to move this game forward so that the now inevitable meeting to persuade the Lannisters can take place, and set up the final season, the battle between life and death, fire and ice.

The episode starts strongly, following our band of frozen questers north of the wall, but as obvious plot points were ticked off down a checklist of suspected happenings, and improbable travelings, it faded from prominence to one I’d rather forget. Let’s get into what happened, what was great, and what made me pull out my little remaining hair.

And to those of you who watched this a week early when the episode was leaked online, thank you for not spoiling it for the rest of us.

[Editor’s Note: This recap will obviously go into detail about last night’s episode of Game of Thrones, so there are going to be a ton of spoilers. Final warning!]

Game of Thrones
Season 7 Episode 6: Beyond the Wall

Remember when Game of Thrones started? Back in the very first episode, before you knew just how crazy this journey would get, there were three brothers north of the wall who found some slaughtered wildlings. Things quickly got weird, and sort of frightening. Going beyond the wall was a very real chance to face one’s mortality. Well, forget all that; going beyond the wall now, in season 7, is just like heading to the bar with your mates for a few drinks.

That’s how things begin, anyhow, and it produced some of the most memorable lines of the series, and some humorous moments that stood out in the bleak wasteland that is the fate of most Game of Thrones characters north beyond the wall.

The Airing of Grievances

It was really amazing when going beyond the wall turned out to be just like a night on the town with the boys. You hit up the local pub, throw back a few beers, and really, just hash out the shit that’s been troubling you. You’ve got to air those grievances boy! That’s what bros do: they fight and make up, usually over a beer. So we’re trading in a beer for  Billy Bryson’s famous travel guide A Walk in the Fronzen Woods, but it holds. These guys have serious problems with one another, and they put them aside rather quickly because, well, they’ve got much bigger problems.

He was at his most hilarious here. Basically, if he opened his mouth, you knew he was about to spit solid gold. Damn, what a great character they’ve made him. And, yes, some of you have been harking on his impending doom, maybe even reveling in it, and it seemed you were going to be right, only to have the producers pull a ‘just kidding’ and keep him around. For now. Thank you! If he’d died after being that funny … what a waste.

Given some screentime and less religiously zealot material, this guy is proving to be an interesting character; it’s too bad he’s been absent for so long.

Mostly this party trick has seemed pretty dated and pretty hokey. Until now. Seeing two dudes light up their bongs swords side by side and just start straight smoking was great. Why aren’t they teaching the rest of them this trick? Sure, Thoros is a red priest and magic, but Beric’s not. 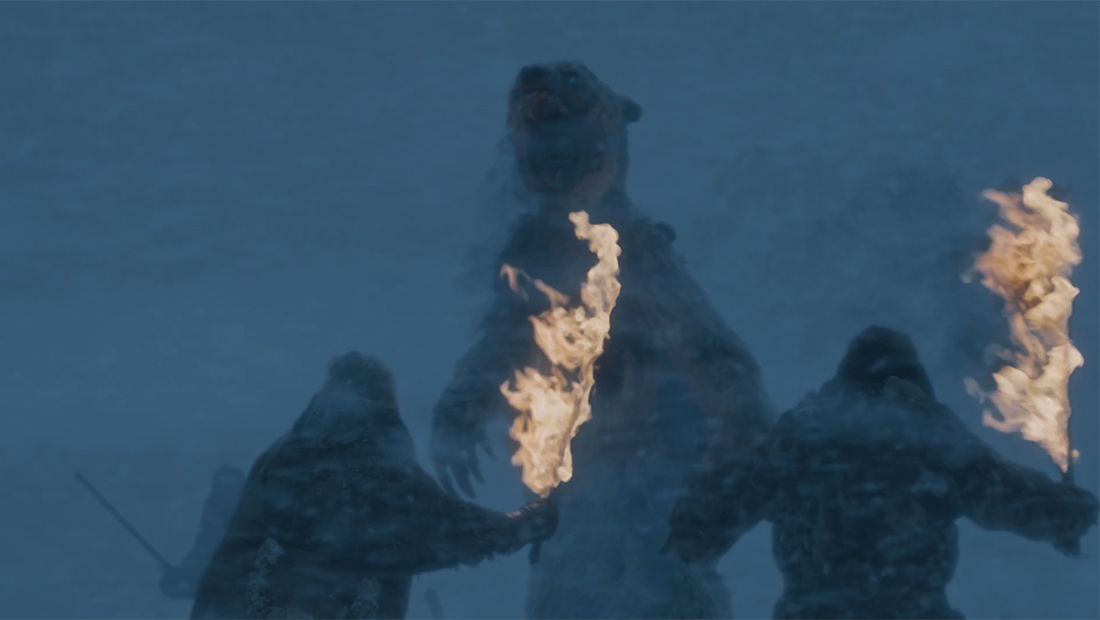 “I think I preferred him in The Golden Compass, Beric!”

If you’ve ever wondered what an undead polar bear would be like, GoT just went and answered the hypothetical question for you: fucking terrifying as all hell. Bears, and polar bears in general, are kind of scary when you think about it. They’re bigger, faster, and stronger than you, and when facing them with a sword can be daunting. Make the bear the biggest sort, the sort that definitely eats men, and then turn it into the kind that can’t die, and you’ve got problems. This reminded me of the latest Pirates of the Caribbean, wherein they addressed the ‘what if this thing were undead too’ question. And of course, here, it hints majorly at what’s to come. Have we mentioned there are spoilers in this recap?

There are problems with how easily Littlefinger continues to manipulate people; has no one learned? Even Arya, who trusts him literally less than shit, is getting played like she’s a little girl. Never mind that she is! We’ve come to expect a lot from our lady-turned-assassin and that should include better sense than she’s displaying. So it’s problematic, but still effectively building loads of tension. It seems she’s fully hoodwinked, as her verbal attacks at Sansa are too pointed to be mere subterfuge directed at Littlefinger, but we’ll wait and see. At least Brienne is not a total idiot, but that means Sansa is going to send her away to King’s Landing. We can’t have any voices of wisdom here.

Again, my pointed question of why not just kill someone north of the wall-pick a traitor, any traitor—and let them reanimate seems blatantly obvious, but no, how about the ‘Seven Samurai’ of which there were definitely at least 10 (thanks whomever suggested that parallel) direct frontal assault the Night King and his mobile-zombie-rave. You need every army in the seven kingdoms to do it, but why not just come with seven bros instead? Sure, makes sense. Predictably, these guys are in way over their heads and need to send for help to the only possible person who can help them: Danny (and her three dragons).

Given  day, I’m not sure a proper rant could be constructed to adequately complain about how dumb this was. It’s no surprise how bleak the situation was, so why not just fly up on a dragon to begin with, pluck a zombie, and be done with it. No? OK, then, if it’s not that easy, how does any of this work? Readers have suggested that if ‘I want to enjoy the show more, I should ignore the issues with traveling and time.’ Fair point. Until now. Jon and his cohorts are stuck on a narrow piece of land, in what looks like sub-freezing weather, not moving, and able to stand there long enough for Gendry to run back to Eastwatch, a raven to be sent to and fly to Dragonstone, and then for Danny to fly back to Jon? GoT, GTFO. This was utter horseshit. It was also predictable utter horseshit as the episode progressed, yet I held out hope that it wouldn’t ‘go there.’ Sadly, said hope was misplaced. They did and it made zero sense, and it’s killing the show’s credibility. If Dragon’s have been that fast all along, why hasn’t Danny just flown ahead of her useless armies and burned everything down before Tyrion warned her that she couldn’t just burn everything down. This undermines the believability of everything that’s taken place and everything that’s to come.

Danny is a Shitty Mother (and pilot)

For all the talk about how devastating dragons are and have been, historically, to the world of GoT, they are proving to be utterly useless, or Danny is proving to be the worst Dragon Pilot ever born. Now that the dragons have entered the Frey fray, at long last, they’re sort of easy to kill, aren’t they? Nearly everyone who’s tried has succeeded (or 50/50—100% hit rate though). How does Danny not assess her enemies and prioritize targets? The white walkers are clearly all alone in a little cluster off by themselves, and clearly leaders—why not just dragon fire them? Why did she ignore the scorpion on the road to King’s Landing? 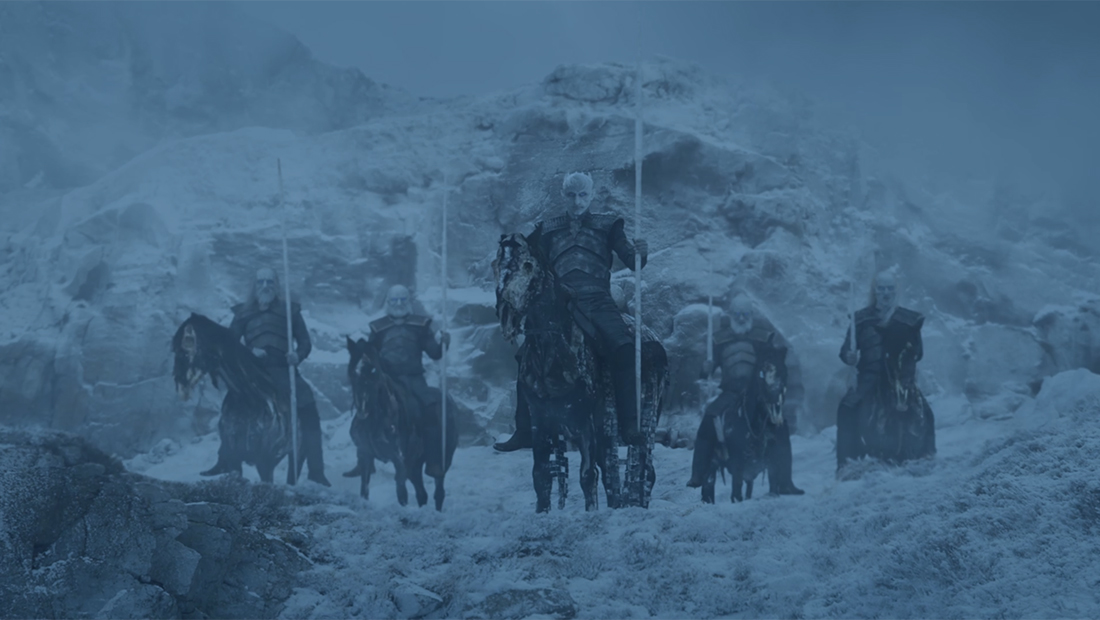 Many people saw this coming and suggested the need for an undead dragon, but lame, just lame, for it to come about like this.

Let’s be clear: Game of Thrones has thrived on surprising its audience and keeping them guessing. It’s a real problem when your audience is guessing everything correctly, and you’re not surprising anyone. Especially given that it’s poor execution and what feels like lazy writing that leading to this disappointing anticlimaxes.

Look at how easily Jon killed his second white walker. Yet Danny and her three Dragons don’t even try? Are they easy to kill, or hard? Remember back when this series began and they seemed nigh on invincible? Are they? Or they fall apart to dust as long as you have the right weapon?

The Swords in the Stone

Why didn’t Jon bring any dragonglass weapons with him? Wasn’t that they whole point of mining the cache under Dragonstone? He knows what these weapons do and yet doesn’t wait long enough to bring a single one? I don’t get it.

The Hound is afraid of fire. We get it. Is this building somewhere useful, ultimately? I guess I shouldn’t complain about a lack of predictability given my complaints of the opposite, but can he not evolve or get over it already? Sorry Thoros, you’re SOL because I’m afraid of fire. 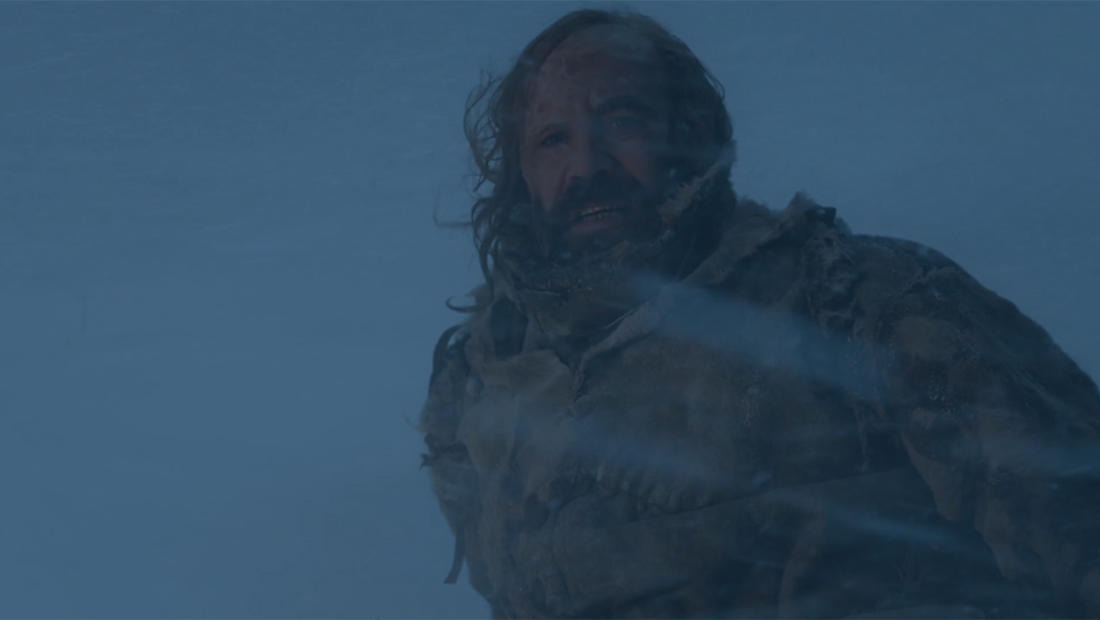 “Come up with a funny caption, and Rick might just give you a better shoutout than I got. I’m not afraid. I was pushed.”

Normally a totally inocculous pastime for teenagers and the emotionally insecure, this episode contained more hand-holding than the rest of the series. We get it. Danny. Jon. Danny. Jon. Jon with no shirt on. Jon’s man-bun capable hair. But, predictability! Where has the mystery gone, gentlemen? 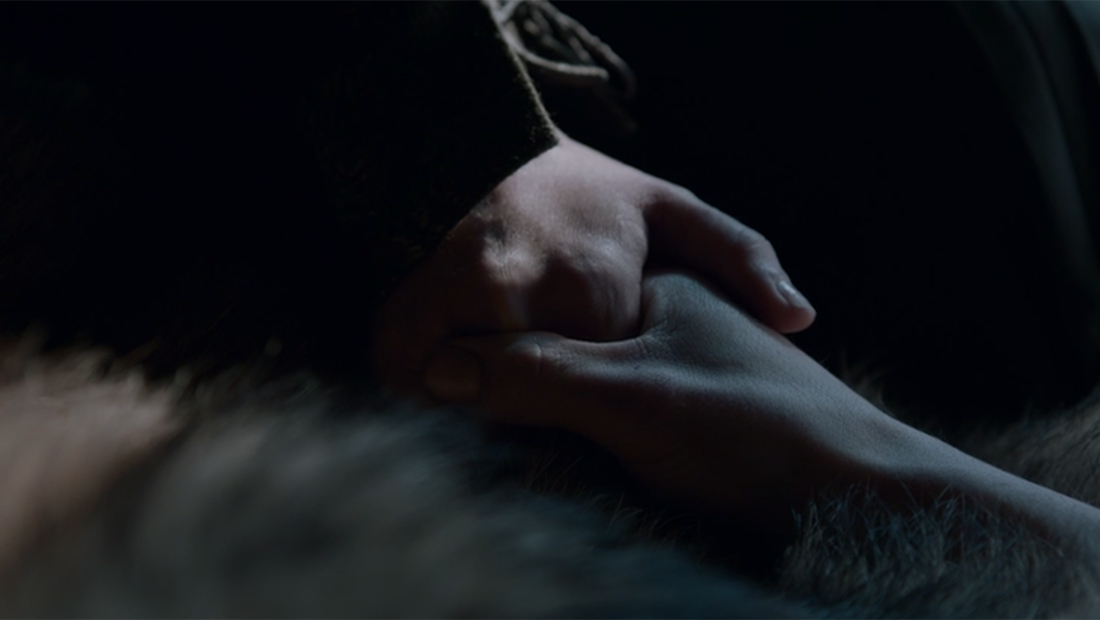 “Jon, I know you’re half dead, but d’you think you’d be up for a little slap and pickle?“

So far, a convenient plot device that turns up whenever someone faces what should be insurmountable odds beyond the wall. How’s he always in the right place at the right time? No idea. How has Benjen not turned all the way to undead wight? No clue. Too convient one too many times? Absolutely.

Ending the episode on the blue eye of the undead dragon was obvious beyond obvious, added nothing to the mystery of what was to come and probably surprised no one by that point. As soon as the Night King threw his ice lance, we knew that was coming. Why even do it.

Listen, I’m old; we old people like to complain, so that’s what I’m gonna do. My opinions are 100% right. 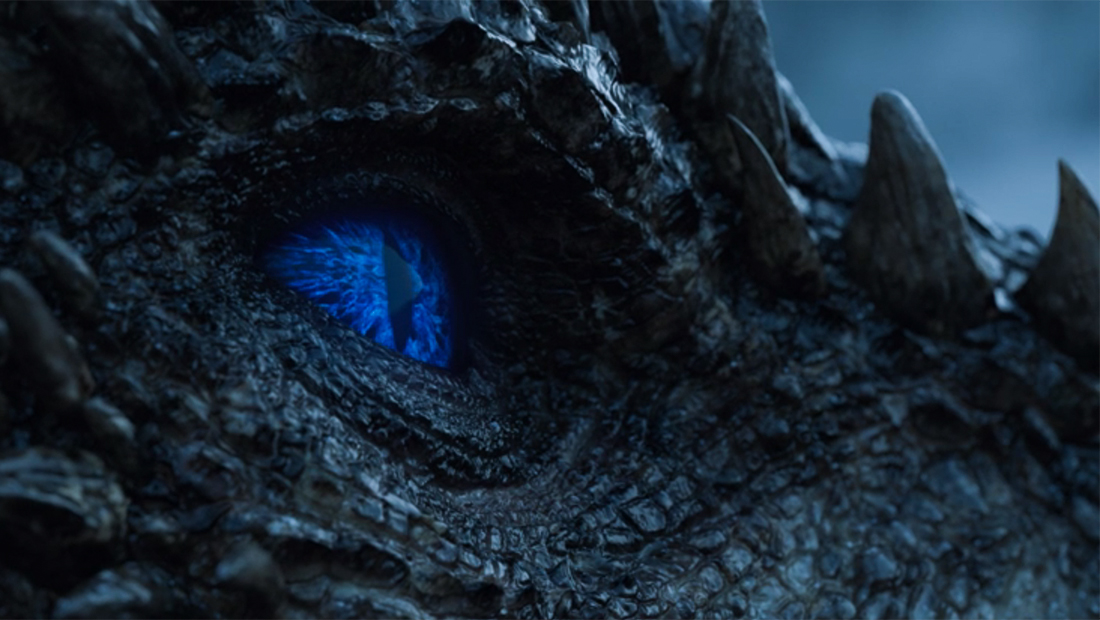 For a special shoutout in next week’s episode and season recap, try your hand at captioning the picture of “The Dog” above.