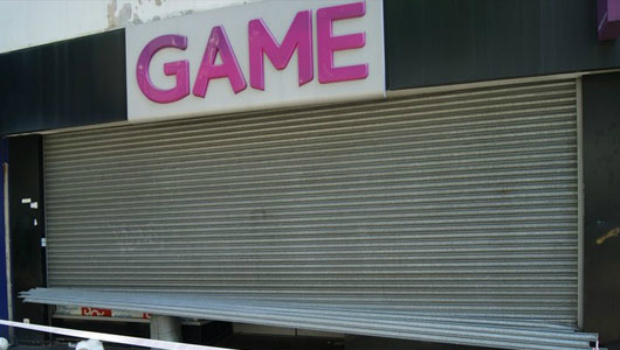 GAME, the failing UK videogame retailer, has not been having a good year so far. A string of major releases never appeared on the shop’s shelves, preoders were cancelled and things were looking gloomy. The GAME Group needed £180 million or it would go into administration. I went to a couple of my local shops last week to see if they’d gone post apocalyptic yet. They had. They were slashing prices everywhere, but the deals still weren’t particularly good compared to their online competition and lots of the most popular games were absent entirely.

Things started to actually look up for the retailer, yesterday. The private investment firm OpCapita was rumored to be providing the necessary funds. It now seems that OpCapita do indeed have the funds ready. They also have a management team poised to start repairing the damage and making the chain profitable again. Unfortunately the chief money lender, The Royal Bank of Scotland, is holding up negotiations.

With £21 million in rent due this Sunday and £12 million in wages due at the end of the month, GAME will be desperate to get these negotiations moving again. If the shop does go into administration 10,000 more people will be without jobs across the UK. However, if the negotiations end favorably the influence of OpCapita may end up extending GAME’s life by quite a bit. Another of the firm’s acquisitions, large electronic goods chain Comet, had its most successful month in two years this February.

Of course, GAME is a bit more niche than Comet and boxed videogames took a 13% hit last year. With Amazon, Play and digital distribution platforms like Steam all offering better deals and greater convenience, this rescue might be just putting the retailer on life support.

RBS urged to act before GAME slips into oblivion [MCV]