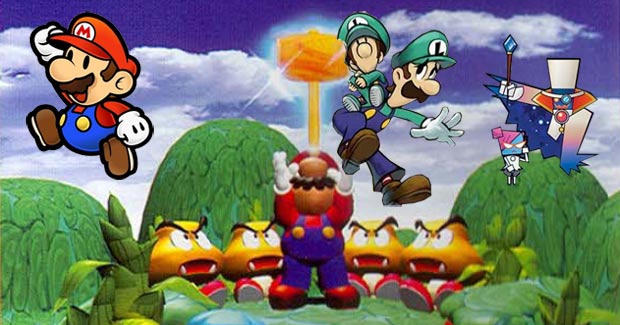 Many castles were pillaged and passed as we went from one Mario platformer game to another last week. Which game’s flags gave us the most victory slides? Here are the top results:

As for the top results for the least favorite Mario platformer game that everyone wanted to see, here are all of the top ties for worst:

After looking at the games most disliked, it makes me think a lot of us haven’t played the full spectrum of Mario games, and would probably (myself included) change our votes if we ever got around to some of the minor and obscure titles that barely got included in the series.

This week we’re focusing on just the RPG Mario games in the series, such as Super Mario RPG, Paper Mario, Mario & Luigi, etc). Which game do you like the most out of the entire RPG Mario series, and why? What aspects of its game design, gameplay, visual and audio experience made up your mind? Give it some serious thought, share your thought process with all of us, and then get some Super Mario friends to join in on the fun. Hit the jump for new bonus questions and next week’s debate topic!

BQ1: What is your least favorite RPG Mario game in the series? Why?

BQ2: Who are some of your favorite party members in fights? Why?

BQ3: Who are some of your favorite story NPCs in the series? Why?

BQ4. What is your favorite item, weapon, power-up, etc in the series? Why?

BQ5. What is your favorite boss fight in the series? Why?

BQ6. What is your favorite secret in the series? Why?

BQ7. What are a few of your favorite levels in the series? Why?

BQ8. What do you want to see the series do next? Why?

SUBMIT YOUR OWN QUESTIONS FOR NEXT WEEK: