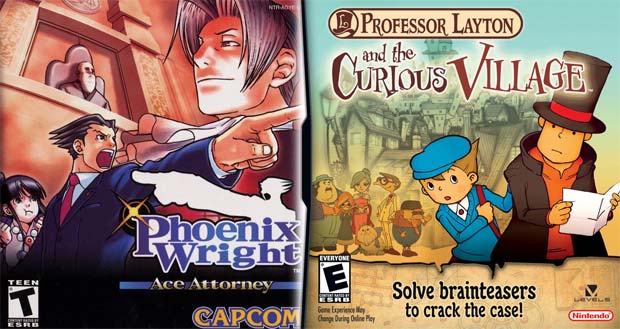 Last week was the conclusion of the PS3 odd debate brackets, and we certainly finished with an incredibly crazy comparison and contrast competition. With two games that are nothing alike, everyone had to give a lot of thought to how they’d vote, and for what reasons. However, in the end, the winner was clear. Here are the results:

This week we move on to the Nintendo DS brackets. With the DS being an insatiable handheld gaming device with record-breaking sales, there’s no short list of games to choose from. Based on past popularity and the suggestions you all left in last week’s comments, I’ve narrowed the picks down to a few iconic DS games.

For this week we choose between Phoenix Wright: Ace Attorney, the game that started a fervent series of legal leisure and laughs, and Professor Layton and the Curious Village, the quirky and enigmatic game that has spawned a series of its own. Which game do you think is better, and why? Give it some serious thought, get some DS friends to share their opinions as well, and check back next week for the winner.

Bonus Question: What was one thing you didn’t like about the game you voted for?