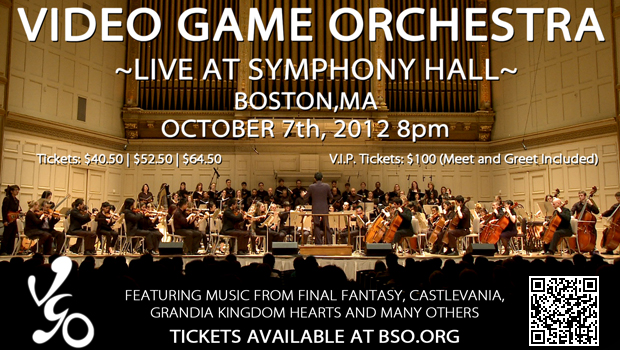 If you’re been to PAX or Anime Boston, you might know a thing or two about the Video Game Orchestra (VGO). Based in Boston, the orchestra performs exclusive arrangements from videogames and anime, and they’re set to take to the stage again on October 7th after their last performance back in April of this year quickly sold out.

Music from Castlevania, Kingdom Hearts, Metal Gear Solid, Final Fantasy, Street Fighter II and more will be performed, and composers Yoko Shimomura (Kingdom Hearts, everything), Hitoshi Sakimoto (Final Fantasy XII, Valkyria Chronicles), Noriyuki Iwadare (Lunar, Grandia, Ace Attorney series) and Kinuyo Yamashita (the original Castelvania) will all be attending the concert and signing autographs for those who purchase VIP tickets. If you’ll be in the area, you can get 10% off your ticket order using the code “rockestralgamemusic” at the Boston Symphony Orchestra website.

If you won’t be in or around Boston and are bummed like me, the VGO is also running a Kickstarter initiative to perform and record the concert for a CD release. Rewards include the CD itself, tickets to a October 7th performance, special vinyl releases, and even lunch with the special guest composers before the event.

Have you seen the VGO and have any thoughts about their performances? Will you be checking them out in person or via their Kickstarter initiative?