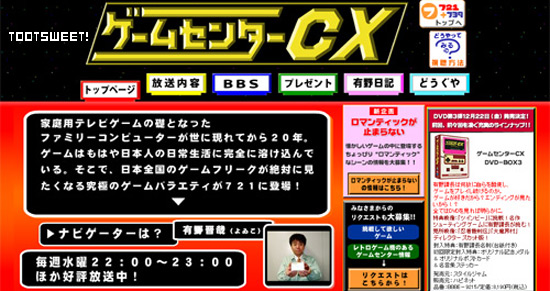 Ever since it was revealed to me (yesterday), Game Center CX: Arino’s Challenge has become my own personal video game equivalent of the Mo-dettes: absolutely no one’s heard of it, it’s amazing and bringing it up in casual conversation will either make you look like a pretentious douche or the coolest person since Steve McQueen.

Since I’m assuming very few of you have heard of it either, here’s Game|Life’s rundown of some of the minigames it contains. The title is sort of an improved Warioware, based on a Japanese television show. It’s essentially a collection of large mini-games (oxymoron?) that emulate classic titles, from Galaga to The Legend of Zelda, in the hopes of cashing in on our collective nostalgia. Of course, if T-shirt companies and 20% of the content of our site and many sites like it can easily tap that vein of enthusiasm, you can be damn sure a Nintendo DS title could as well. That is, assuming it comes to our country. As it stands, the game is Japan-only, but since it’s getting press from this article (goodbye fourth wall!) and all of G|L’s coverage, we’re hoping it gets a translation tootsweet.

(Editor’s Note: This entire piece was written specifically so I could use the word “tootsweet.” Take that as you will. — Nexsweet)