Celebrating 30 years of the Game Boy

I can recall the very first time I experienced the awful phenomenon known as FOMO, or “fear of missing out.” It was in middle school. I was obsessed with the WWF at the time and my family had recently traded in our SNES for the “way cooler” PlayStation. That was the center of my gaming world for the next few years and my brother and I made the most of it, trying out an endless array of games from the local rental shop. But for each unforgettable experience I had with the system, there was one I missed out on because we didn’t have a Game Boy.

In fact, I don’t remember seeing a Game Boy in the flesh until 1998. None of my friends had one. For the longest time, it was thought of as the “kiddy console” even though my friends and I were very much young kids in those days. I know I had excuses for never asking for one for Christmas: the screen was small, it didn’t have colors, SNES games are better, yadda-yadda-yadda. Excuse after excuse my dumb child-self made that kept him from one of the richest libraries in all of gaming, and in my eighth-grade year of school, those excuses kept me from experiencing Pokémon when it was at the forefront of the gaming zeitgeist.

There was one person at school — that I knew of — who was balls-deep in love with the game. I’d see him playing his Game Boy Pocket at lunch, on the bus, in the halls before school. He was enraptured by it and I was jealous. By 1998, the PlayStation had started to grow stale for me. My brother’s insistence of playing nothing but Madden slowly nudged me away from gaming. I wasn’t having the awe-inspiring moments I’d had with the medium in prior generations, so I threw myself into my short-lived wrestling fandom. I couldn’t bring myself to buy a Game Boy for Pokémon — which by this time was also being considered nothing but a “kiddy product” — and I would have missed out on nearly everything the system had to offer, if not for the Nintendo 3DS and its wonderful Virtual Console. 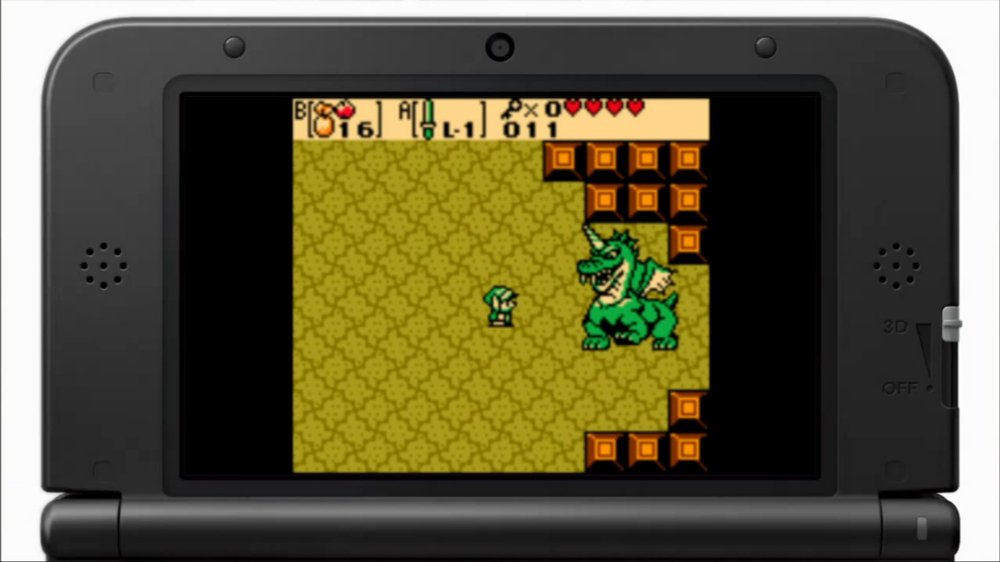 Until the release of the Nintendo 3DS, the only two original Game Boy games I had played were Link’s Awakening and Oracle of Seasons. The latter I bought when I first picked up my Game Boy Advance — immediately becoming well aware of just what I had missed — while the former found its way into my GBA SP one quiet night in college. By then, I had begun to appreciate the works found in previous console generations as testimonials to the available technology, rather than as simply stepping stones to better and more powerful consoles. But beyond those two titles, nothing from handheld gaming’s past found its way into my collection.

Then I got my 3DS, the original turquoise model just a week or so before the release of The Legend of Zelda: Ocarina of Time 3D because I’d convinced myself to get it before the price drop so I could get those Ambassador Program games. I still haven’t played all of those games but I did play the hell out of Ocarina of Time 3D and Link’s Awakening DX, the first game I bought from the Virtual Console. I was content leaving my VC purchases at that game and maybe the Oracle titles should they ever come to service, but there was one game every publication I read online was telling me to play: Donkey Kong. So I paid the five bucks or however much it cost and downloaded it one day before work. An hour later I had downloaded five more Game Boy titles because in that time, playing that wonderful title, it dawned on me just how wrong my child-self was about the platform.

It just wasn’t about missing the boat on Pokémon. It was about every title, little or big, that could have filled me with glee in those years I was drifting away from gaming. Donkey Kong, Super Mario Land 2, Wario Land, Mole Mania, Shantae, Pokémon Puzzle Challenge, Pokémon Trading Card Game, Toki Tori, Lufia, and more showed me how timeless these 8-bit games were, and how foolish I was as a child to dismiss the platform.

The many NES and SNES games I purchased on my Wii were for the sake of nostalgia, games I remembered enjoying as a kid that I wanted to own again even if I had no concrete plans to actually play them. The Game Boy and Game Boy Color games I’ve bought on my 3DS weren’t tied to my past. Rather, I wanted these games because I knew I had missed something spectacular. So I bought them and I played them and I beat them, even the one I really didn’t like.

I’m not sure why the Virtual Console for 3DS never met its full potential. I don’t know if it’s licensing issues, 3rd-party developers not wanting to participate, or something else that is beyond my knowledge of the workings at Nintendo, but the selection of Game Boy and Game Boy Color games for the service is ridiculously meek. Just 50 Game Boy games were released in the North American Virtual Console store. The Game Boy Color saw just 31 of its games on the service. In comparison, the NES had 64 of its games make it to the handheld. I don’t know what happening in 2012 to slow the rollout, but there is a bevy of classic titles we missed out on. Everything from Final Fantasy Adventure to the Star Fox-precursor X to Kid Dracula skipped it.

The 3DS Virtual Console hasn’t seen a new title since last year’s release of Pokémon Crystal and, as it enters its twilight, I doubt any other lost classics will make it to the system. A rumored — though I think it’s more wishful thinking than anything — Game Boy Mini hasn’t materialized yet, leaving the Nintendo Switch Online service as the best shot going forward for this treasure trove of titles. There is a lot to be desired of the subscription service, but the call for “more games” rings most loud above all else. If this service is to be Nintendo’s Netflix-for-classic-games, as it should be, then the company needs to expand its selection far wider and far more quickly than it is doing now.

Again, I don’t know the ins-and-outs of how the business side of Switch Online works. It could be more complicated than I give it credit for, as I’m sure most aspects of this industry are. What I do know is having these titles available to players opens a world of discovery to younger Switch owners who may have never experienced the pure joy that is Balloon Kid.